Today was a bit less energetic. By 9.15 we were still the only humans for several miles in every direction, but as we’d not had any lecky and only used the loos, we didn’t feel too guilty about driving off. We continued along the fabulous Forgotten World Highway

winding up and over saddles then swooping back down to charismatic valleys with one-horse towns.

We especially liked Whangamomona, which declared itself a republic in 1908 after a falling out with regional government. 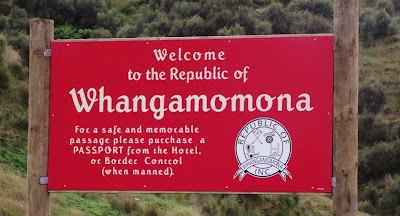 It made up 50 years later, then declared independence again in 1989, probably as a publicity stunt.

All the roads in NZ seem to have suffered land slips and washouts recently; this is one of the hairpins that has been cleared, but there are little piles of rubble and vegetation all over the place. 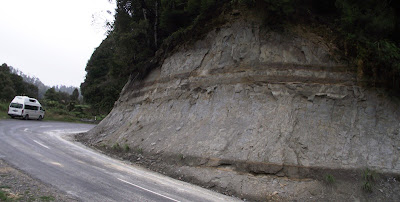 We got to the end of the Forgotten World Highway at Stratford, where we followed the walkway round the town and learned some of its history. It has a bust of Shakespeare outside the info office and a very pretty river running through it. We stopped for lunch and met a very nice Kiwi called Kevin who told us a lot about his home town and was obviously very proud of it.

From Stratford we went due west past Mt Taranaki, (or Mt Egmont, as it was named by the Europeans) 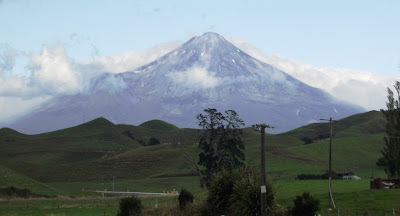 to the coast to the town of Opunake where we had a walk along the beach. Stupidly we forgot to take the camera with us so there are no photos of the black sand and the fabulous hopping rocks in the lovely clear Tasmin Sea. We consoled ourselves by buying ice-creams; we asked for small ones and got these. 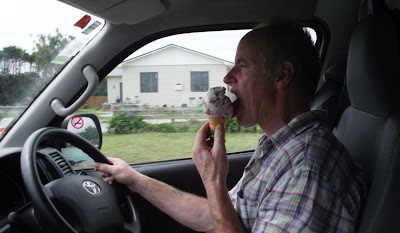 We drove on up the coast to the Cape Egmont Lighthouse and then headed up to New Plymouth for the night.
at February 02, 2011