While we were at Pigeon lock we got on with hand rail preparation and undercoating, and we scraped all the tatty looking non-slip coating off the gunwale on the towpath side. We also drove about 1,000 miles in the car.

On a whistle-stop tour of England we first went to Lincolnshire for a party, collected some willow from our old house and got back to the boat at 4am. 5 hours later we went to Mum & Dad’s for their wedding anniversary. The next day we drove to Brize Norton to meet Chloe who was coming back from Afghanistan and take her to Frankie’s. That night we all stayed at Frankie’s house, Chloe left for Birmingham in the morning and we went to Karen’s to do some work on her car. After tea we came home again, but not for long. Our next excursion was to Chesterfield for a doctor’s appointment. (We’re registered there as it’s where our postal address is) Dave is diabetic and we needed to get him back into the system of regular blood tests and check-ups. The doctor was very obliging and booked him in the very next day. In the afternoon we went over to Buxton to see Wiltz & Annie who very kindly put us up overnight so we didn’t have to drive back again. We finally got back to the boat on Thursday night.

On Friday we got up late and didn’t go anywhere all day.

On Saturday we had to go to Southam for a dentist appointment; there was a 50’s “retro” celebration on in the town, so we rang Kim and Luke and they met us there. It was well attended with lots of cars and bikes to look at and we had a good time. In the afternoon they came back to the boat for tea and the inevitable sleep over and on Sunday we crossed the canal and had a walk through Kirtlington Quarry Nature Reserve 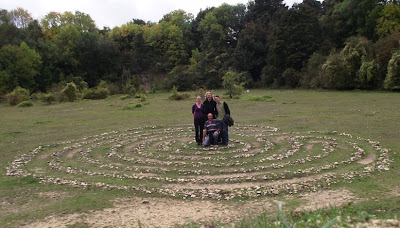 followed by a visit to the fabulous “Jane’s Teas” for a slice of home-made cake and a pot of tea on a sofa in the trees overlooking the canal. 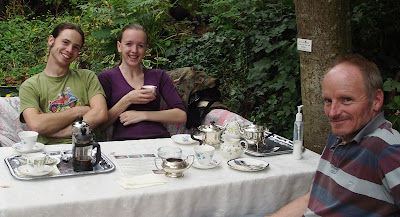 It’s the most bizarre, eccentric, wonderful café in the world, and so, so English. 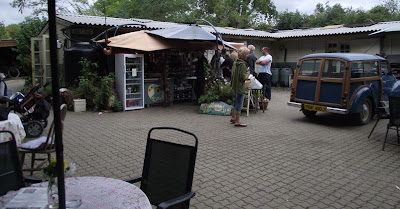 Sadly it only opens on Sundays, and next Sunday is the last one this year, but next summer, if you want a really jolly afternoon in the Cotswolds, go to Kirtlington, just north of Oxford, stand on the village green, turn round three times and click your heels together. Then go down Mill lane.

We’d got a growing list of noisy jobs to do; chain-sawing, sanding, drunken singing etc. and Pigeon Lock is near some houses, so after much discussion and changing our minds several times, we finally decided that the best plan would be thus: First thing Wednesday – go to Thrupp, wash out, fill up, turn round. Come back to Shipton weir and moor just by the lock. Do all the noisy stuff on one side, go through the lock, turn round in the river, come back through the lock and do all the noisy stuff on the other side. That should take the best part of a fortnight, and we should have stripped both gunwales back to bare steel, given them 5 coats, and have a red border round where the panels are going to be. In other words, all the red bits will be finished just before the weather makes painting impossible. We know it seems like a backwards way of going about things, doing all the fiddly bits first, but the idea is that the red bits – hand rails, borders & gunwales - all get a rough painted edge, then, when we come to painting the main panels and the roof next year, we simply mask off the red bits (which by then will be totally cured) and do a quick, shiny job without any fiddly stuff.

The first part almost went to plan, the only snag was that the last week in September has been so glorious that in the afternoon the side facing the sun got too hot to touch, let alone paint.

Here are some pictures of an idyllic autumn day boating on the Oxford. 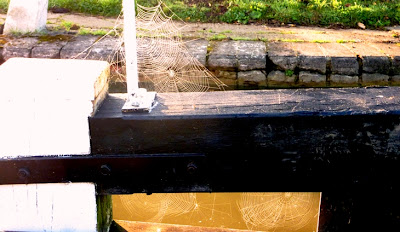 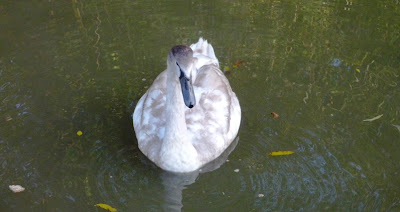 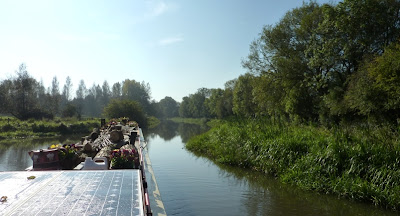 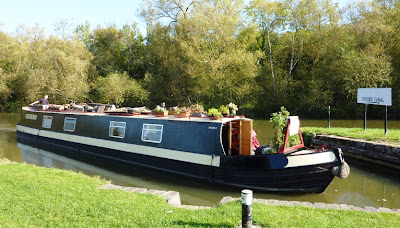 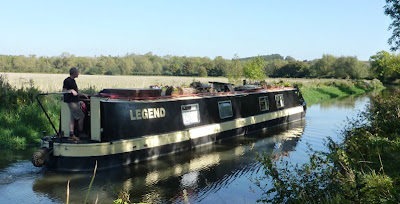 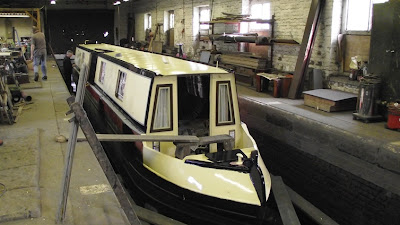 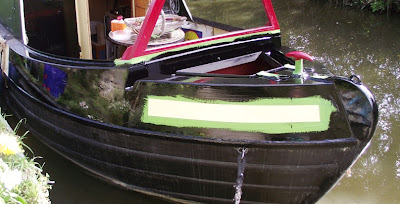 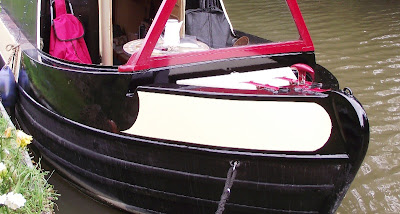 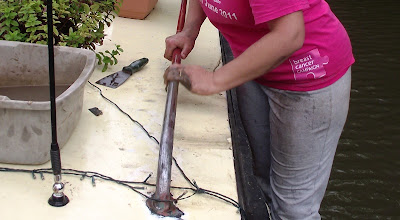 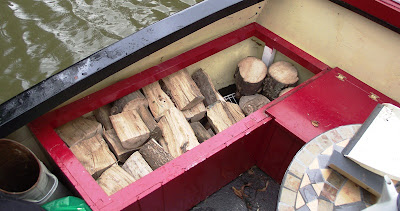 So no, it’s not over. We’ll re-write the profile and change the sub-title to reflect what we’re doing now, but one thing we’ve learnt from all this is that we’ll never, ever be listless.
at September 20, 2011 2 comments: 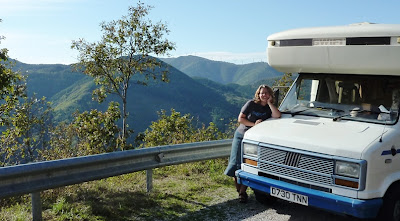 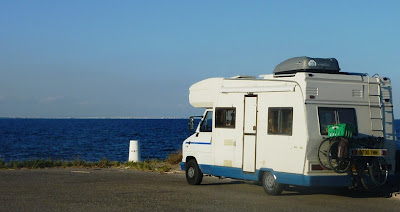 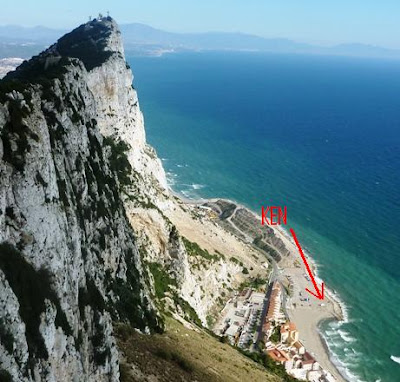 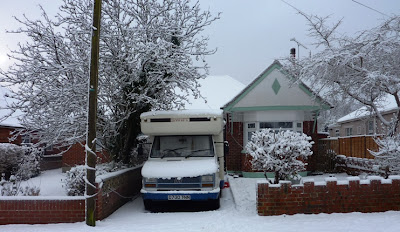 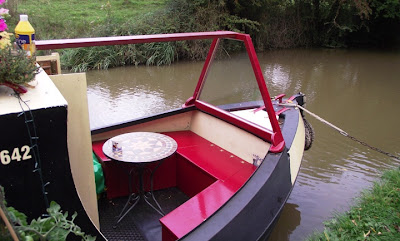 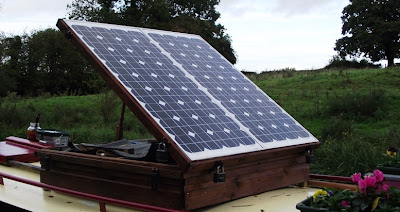 We had a walk into Lower Heyford on Tuesday; it’s only a couple of miles down the tow-path, but for the first time this year we had to get dressed up in woolly jumpers hats and and coats. We really enjoyed the feeling of being wrapped up against the elements and the hawthorn berries, rose hips, elderberries and hazelnuts that we found on the way only added to our inner autumnal glow. We missed autumn last year – we didn’t leave Portugal till the end of November, so we’re looking forward to kicking leaves around, wearing scarves and gloves and coming home to a cosy boat with a homemade casserole bubbling away on the log burner. Mind you, while we were sitting in a tea shop by the station the wind picked up, the heavens opened and lounging about in a beach bar in the tropics sipping Pina Coladas suddenly seemed like quite a nice idea.
at September 09, 2011 No comments: