It was a bit blustery so we changed our minds about the hovercraft; 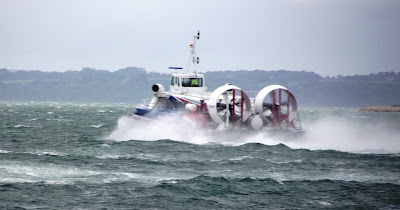 we’ll go back and have a proper holiday on the Isle of Wight at some time, maybe we’ll leave the boat with someone for a week and have a cycling holiday. What we did do was have a couple of very happy days in Portsmouth. Ann-Marie used to live there when she was in college and made some very firm friends through the local 2CV club. So, on Saturday we turned up outside Fran & Sean’s house. We all went for a meal on Hayling Island, then on Sunday Sean took Dave to the Hollycombe steam collection; a fascinating mixture of everything steam driven from fairground rides to threshing machines. 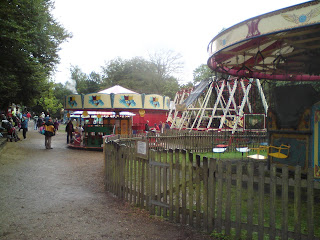 It’s all run by volunteers and Sean has been involved with it for thirty years or so.
Fran, Ann-Marie and the adorable Phoebe had a girly day in the park, singing and dancing in the rain. Thank you both for everything, it was great to see you and be made to feel so welcome.
On Monday we parked up at one end of Portsmouth sea front 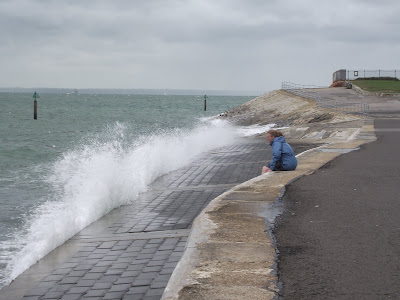 and went for a windswept walk along to the other end before driving back up the A3 to see Elaine and Steve. They’ve recently bought a 30 year old folding caravan. It’s in amazing condition and they love it to bits. It was great to see them; we can't stress enough how lucky we feel to have such a wonderfully welcoming bunch of mates.
After tea we set off for Winchester and pulled up on Coops & Carol’s drive amongst a throng of 2CVs, Dyanes and H Vans. This is the advance party for the 32nd 2CVGB National Meeting, this year held in the grounds of Sparsholt College with a Roman theme. We’re helping with the setup; tomorrow morning we all arrive on the site and start putting up fire and water points, marking out roadways and filling goody bags. The weather forecast for the Bank holiday is fairly good but we may have to dodge the showers beforehand.
at August 29, 2010 No comments: 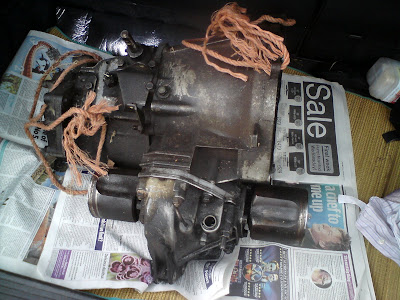 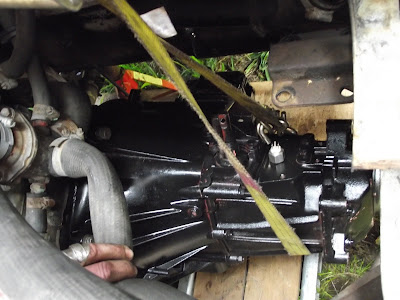 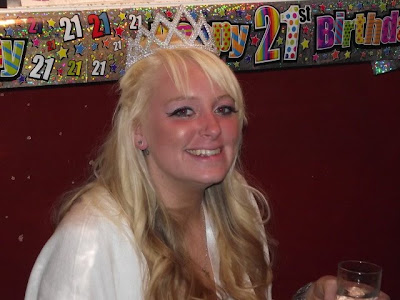 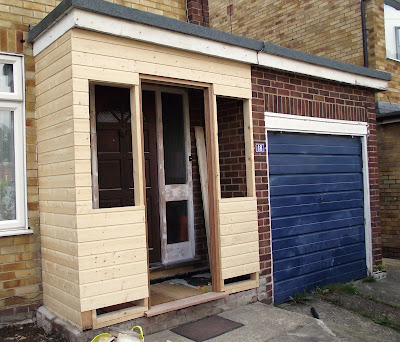 so on Saturday we’re off again. We’re due in Winchester on Tuesday to lend a hand with the set up for the 2CVGB National Meeting over the August bank holiday, so we thought it might be fun to go to Portsmouth for a couple of days and have a jolly over to the Isle of Wight on the hovercraft. Just the two of us.
at August 20, 2010 No comments:

For one week a year the seaside town of Sidmouth comes alive with buskers, street entertainers and morris dancers everywhere you look and live music sessions in all the pubs. Our first two days at Sidmouth Folk Week were chilled out and relaxed, drinking in the atmosphere and getting to know the town before Ann-Marie’s first dance spots on the programme. Each evening we both managed to join Herbacious Border; a random collection of dancers who get together to dance Border Morris on the seafront at 6pm.

Wednesday & Thursday started early with a Molly workshop, followed by dancing with Pig Dyke in and around town. Friday was a later start which gave our Pig Dyke friends the opportunity to throw us a farewell party on Ann-Marie’s last day of dancing with the side. The festival ended with a torchlight procession along the seafront, Ann-Marie with Pig Dyke and Dave with Herbacious. At the end of the procession all the torches were extinguished in the sea and there was a fabulous firework display.

Saturday morning we were up and away early heading out of Devon, feeling sorry for the holiday-makers queuing up on their way in. We waved to Stonehenge and carried on to meet Ann-Marie’s extended family at the annual BBQ in Wendy & Dave’s lovely garden in Shepperton. Surprisingly, the threat of rain held off and we had a really good day. Between us we’ve seen more aunts, uncles and cousins in the last couple of weeks than we have for years. This travelling lark is definitely a Good Thing.

Things have been a bit busy since then. Dave started work on Karen’s new porch on Sunday and on Wednesday he took the Kon-Tiki over to Wendy & Dave’s to take the gearbox out. Ann-Marie’s Dad has a friend called Brian who’s a wizard mechanic. Brian agreed to rebuild our box, so at midnight on Wednesday, Dave and Pete found themselves in a shed with Brian and a stripped gearbox. The good news is that all the noise was being made by a little cage in one bearing which is replaceable; the rest of it is in good-as-new condition. Brian should have it all back together next week and – fingers crossed - it’ll be back in the van by Thursday or Friday. On Thursday we went mad with a bow saw and secateurs in Karen’s back garden, coppicing the Hazel trees and letting in a lot more light.

This weekend we’re off to Derbyshire for Frankie’s 21st birthday BBQ, another party to look forward to!
at August 15, 2010 No comments: 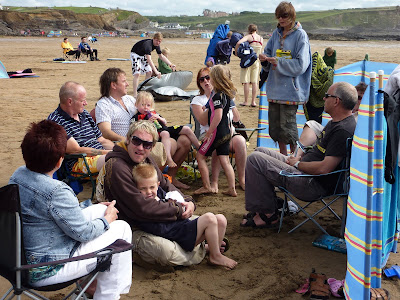 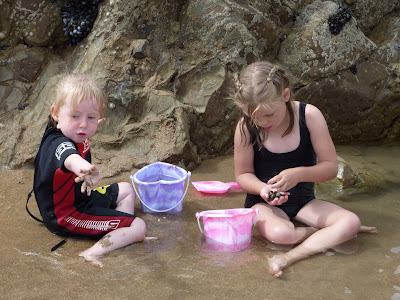 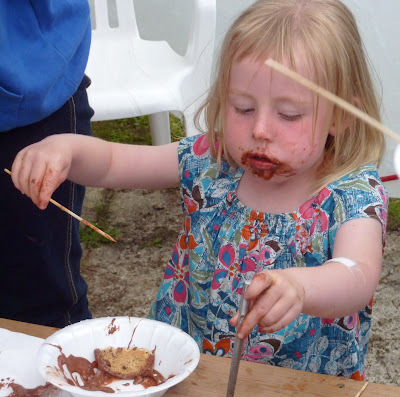 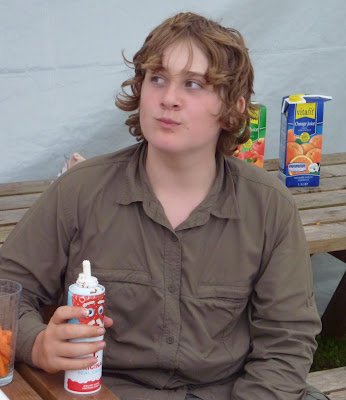 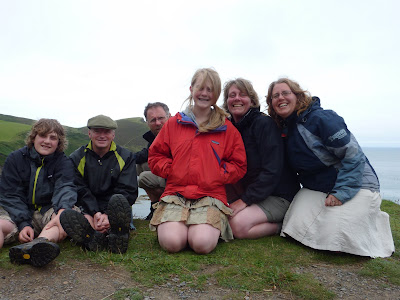 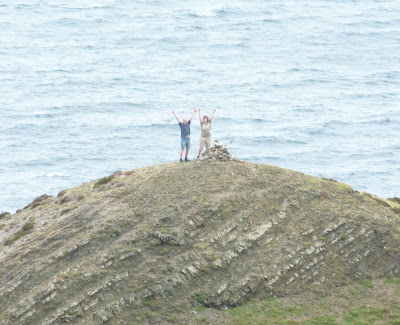 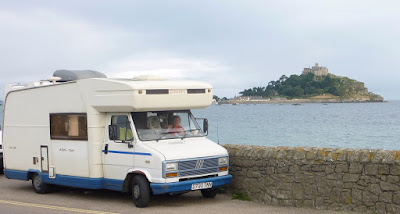 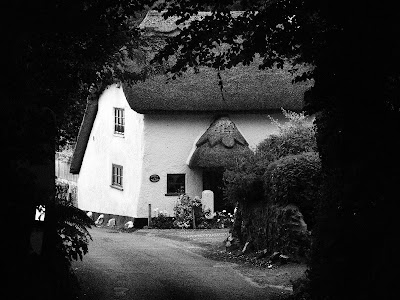