We stayed at Flecknoe for six nights, five pointing East and one pointing West after we’d been to Braunston and back for water and elsan. After weeks and weeks of Covid 19 lockdown when we didn’t see any of our mates, the easing of the restrictions not only brought a glimmer of light in the tunnel, but also made Flecknoe feel like a bit of a social whirlwind. First Bob and Mandy came to see us; they had intended to bring Matilda Blue and do a bit of boating with us, but that plan got scuppered when one of the lock gates on the Watford flight broke so they came in the car instead. It was lovely and sunny when they turned up, Dave had cut the hedge and put some chairs out...

...but the moment Ann-Marie brought the scones and tea outside it started raining. Of course physical distancing was still in force so we couldn’t all just go and sit in the boat, and it seemed very bad form for us to go inside and leave Bob an Mandy out in the downpour, so despite handing out umbrellas we all got thoroughly soaked. As did the scones, the tea, the butter dish, the jam pot and the cream. We should have all been miserable and abandoned the whole thing as a failed disaster, but boaters are made of sterner stuff, and we all found it rather funny

That evening, after the rain had stopped, we went just the other side of the hedge to have a lovely meal with Gordon and Helena who’ve moved out to Flecknoe from their house overlooking Braunston marina. Even with the restrictions, they still managed to be the perfect hosts. Gordon never let anyone’s glass even approach empty, and Helena produced some amazing food without fuss or apparent effort. They’re some of our most favourite people and so easy to be with. We love spending time with them.

When Colin and Julia came to visit a couple of days later, in order to avoid a repeat performance of the cream tea drowning, we erected a makeshift shelter made from an old tent groundsheet. 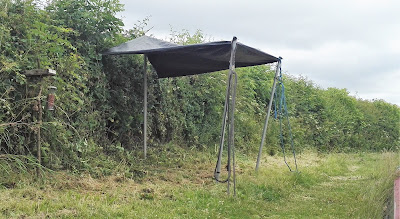 They’d come up to Braunston to order a new cover for the wheelhouse on Smith’s Lady, so it was a perfect opportunity for them to come over for lunch under our canopy and to have a catch up. It was great to see them again and we’re really pleased that they got to see Legend in its natural environment, ie in a canal with more than just the roof visible from the bank. Of course not one spot of rain fell while they were there.

Before we left Flecknoe we scored a friends jackpot by driving over to Rugby to see Lindsay and Paul and had lunch in their ever growing garden. Linz has done an amazing job repainting Happy Daze, it looks really stunning and has spurred us on a bit with ideas about touching up and sign-writing Legend. Another happy afternoon with some more of our favourite people.

Far too soon the social fairground ride came to and end. We said goodbye to Flecknoe and retraced our steps back to Wigram’s Turn where we made a right turn under the bridge to stay on the GU.

It is a bit unusual to have to turn off a canal in order to stay on it, but this is because of a historical anomaly that is worth explaining.

The Oxford canal was up and running years before the Grand Union was even thought of, completed in 1790. For 15 years it was the only - and therefore very profitable - route from Birmingham to London. However, to use it, boats had to follow a huge Z across the country, firstly via the Birmingham & Fazely and Coventry canals to Hawksbury junction, then round Brindley’s tortuous contour bends on the Oxford with the final leg down the unpredictable and just as bendy River Thames. For the first few years this wasn’t a problem as most of the trade on canals was local; coal from mines to cities, lime from blast furnaces to fields, wool to the mills and finished products back to the market etc. But very soon the long distance trade that canals made possible became more lucrative and investors began looking for something better. After the earlier canal building techniques of following contours gave way to William Jessop’s more ambitious cuttings and embankments of the Canal Mania years, a more direct route was proposed in order to speed things up. The Grand Junction Canal, later to become the Grand Union, had to cross the Oxford at some point, and it seemed sensible to do it between Napton and Braunston where the former could use a couple of miles of the latter’s navigation to save a bit of digging. As it turned out, the tolls that the Oxford Canal Company charged GUCC boats for using their five mile stretch of water were so extortionate that it might have been more prudent to build an aqueduct. Eventually the Grand Junction bought out Oxford and swallowed up the five mile stretch, cutting the Oxford into north and south sections.
Which is why the North Oxford Canal doesn’t go anywhere near Oxford, why the South Oxford Canal confuses everyone by going north from Oxford, and why boats on the Grand Union turn off it at Wigram’s Turn in order to stay on it.

We came down the Calcutt and Stockton flights with a very shiny, newly painted boat called Rickman. 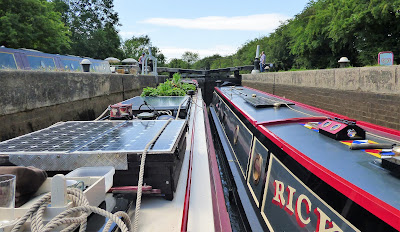 We’d noticed it a couple of times around Braunston and we’d commented on how perfect and expensive looking the paintwork was, so there was quite a bit of trepidation as we carefully followed them into the locks, trying to avoid scuffing against them. It was quite windy in some of the pounds, which didn’t help, but they were lovely people and happily forgave Dave the odd bump. 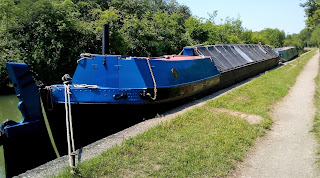 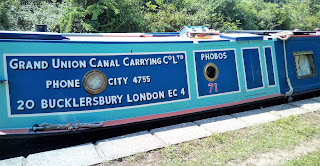 … a Star Class motor called Phobus and a Town Class butty called Alperton. They turned out to be lived on and owned by a really interesting family who we spent a fabulous impromptu towpath evening with.

While we were at Radford Semele it was so hot that we had a couple of days just crashed out with all the windows open. The weather this summer is crazy, it’s either so hot we can’t move ourselves, or so windy we can’t move the boat, or raining so we don’t want to do either. It doesn’t make getting across to Stourport in a hurry particularly easy, but considering our recent history, anything that involves navigation of any form is fine by us.

Going up Hatton really brought home to us just how far we’ve come as boaters. When we first came up these 21 wide locks nine years ago, we really didn’t know what to expect; it’s a big challenge if you’ve never done something like that before. We put a call out on social media for volunteers to come and help and ended up with 14 people, all eager to wind paddles and push gates. And although we had a fabulous fun filled day, when we look back we realise just how chaotic it was. Now, with just the two of us and two and a half thousand more locks under our belts, Legend gracefully ascends, drama free and controlled under our watchful eyes, 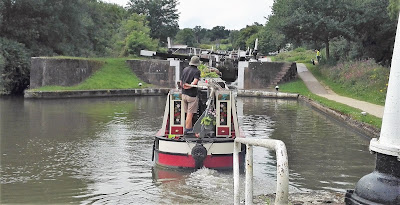 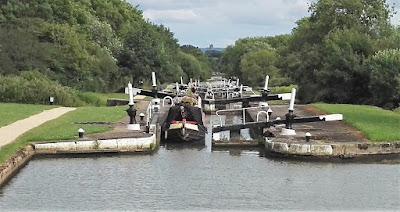 ...and we even have time to shut the gates behind the pair of boats going up ahead. We’ve learnt a lot.

We stopped at the top of Hatton for a few days before crossing the long pound to Kingswood Junction. While we were there we walked over to Kenilworth to look at the castle... 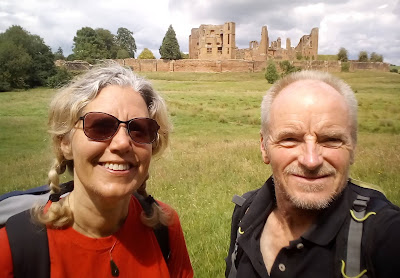 ...and pick up - of all things - a couple of copies of the Waitrose newspaper. While we’d been at Wallingford we’d got hooked on doing the crossword and the sudoku puzzles on a Friday morning. (We’d also got hooked on the free coffee and a sticky, but we think its probably a good idea that we can’t do that till lockdown is properly lifted) So now, on a Thursday or Friday, if we find ourselves within three or four miles of a Waitrose, we’ll feed our compulsion and get a bit of exercise at the same time. To be fair, we have been walking a lot since we left the Thames and have only missed going out on the days when it has really been horrible. Here’s some nice walking pictures. 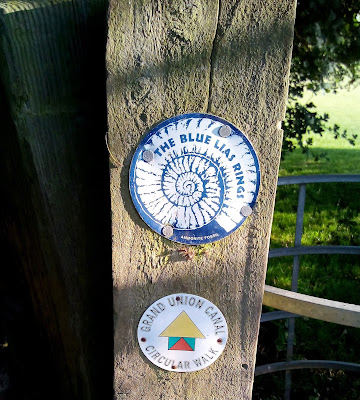 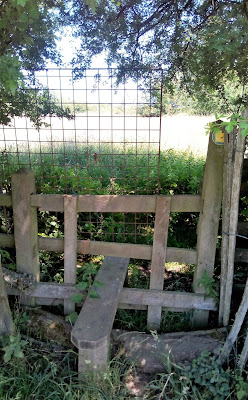 Some farmers don't make it easy. 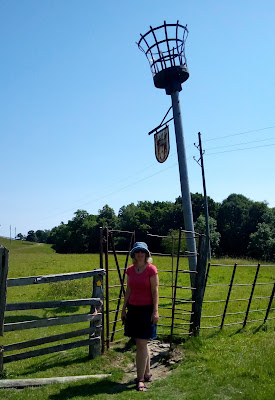 A Beacon of Light. And a beacon 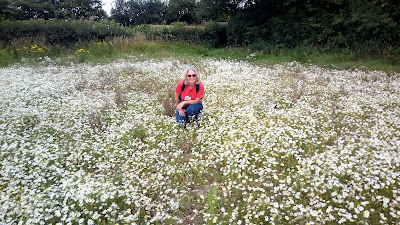 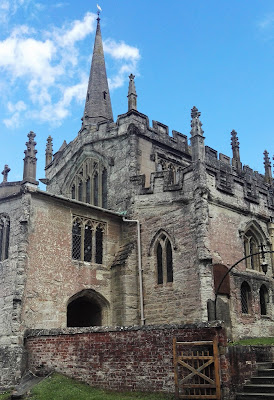 The section of the GU from Braunston to Birmingham was drastically modified in the 1930s; all the locks were widened to accommodate two narrowboats side by side and a good deal of the edges were concreted. Lots of the concrete edges still remain and are very useful for painting and other maintenance jobs. Better still, the towpath changes sides quite regularly, so after three weeks, by the time we left the GU, we had brand new paint on our red stripes and gunnels on both sides of the boat, and Legend was looking better than ever. 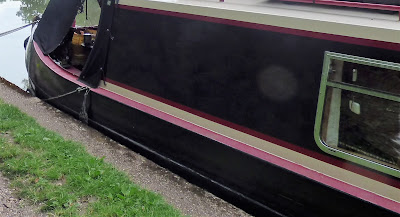 So, after three very enjoyable weeks on the GU, we turned left and slid under the Lapworth Link towpath bridge at Kingswood and through the lock to join the north Stratford Canal for the next step on our journey.