Kate and David came for a boat trip from East Riddlesden to Brunthwaite Bridge, just before Silsden. The Daves crewed the boat through the swing bridges while the girlies stayed inside for some quality time. Ann-Marie was on light duties, resting her poorly knee, but still managed to rustle up some very good soup and crusty bread for lunch.

Over the next couple of weeks while Ann-Marie was banned from excessive physical activity, the Daves went out a few times for some big manly walks across the moors, fields and woodland of West Yorkshire. 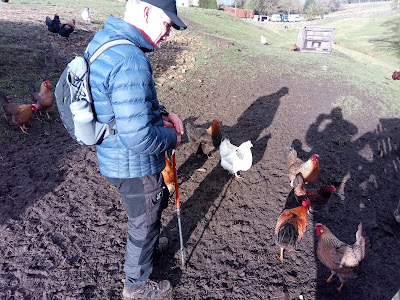 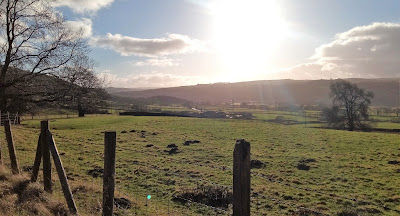 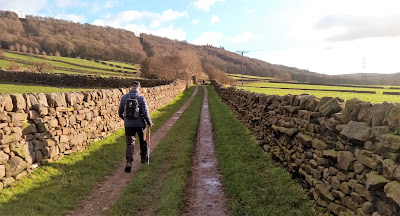 Silsden Reservoir looking rather empty.
They recklessly rambled over Rombalds Moor, slipped and slithered round saturated Silsden reservoir, ambled aimlessly about in Airdale, and merrily marched for miles along the Millennium way. Most of their adventures followed the roads less travelled and once again proved – should further proof be at all needed – that the existence of a right of way by no means guarantees the existence of a path. At one point, having already squelched their way through ankle deep gooey mud and got lost following a sheep track, the increasingly vague footpath signs they had been following finally petered out in a farmyard. On one side was a smelly shed full of nervous looking sheep, and on the other an even smellier shed full of very mucky, very large and very agitated bullocks. All the mooing and bleating did not go un-noticed by goodness knows how many dogs in some other shed, all of whom went berserk, no doubt salivating over the thought of fresh walkers for dinner. Apart from the way they’d come in, there seemed to be no obvious exit for the Daves to take, however the map and the GPS both agreed that they were still on the footpath. With no other option, (and NO, Dear Reader, for a pair of ex-truckers turning round is NEVER an option) they briskly walked across the yard to where, secret passage-like, there appeared a small gap in the buildings with a little gate. Beyond, there was a lane leading to the Millennium way and salvation. Farmer Palmer clearly thought that any o’ them bobbly ‘atted ramblers following the right of way through his farmyard would benefit from some traditional country entertainment.

We liked being at Silsden and we’ll probably go back to there, and back to Bingley as well, before we carry on over the canal summit after Easter. The views from the canal as it clings to the side of the Aire Valley just get better and better.

We’ve got several friends up here too, so it’s been good to be in their neighbourhood for a while and rekindle old relationships.

There’s also a little pocket of parkruns to choose from around here, and they’re all very different. Some are flat, - well flatish; this is Yorkshire after all - and some, like Cliffe Castle in Keighley, are murderously hilly. Some are all tarmac while others have grassy sections, so our Saturday mornings have become very interesting and very sociable indeed. Ann-Marie has been volunteering while her knee gets better, (marshalling, bar-code scanning, token sorting and generally cheering everyone on)... 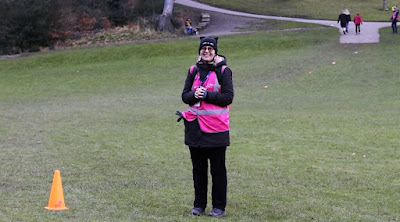 ...and Dave has settled into a fairly respectable time of just under 29 minutes. Not bad for an old bloke.

Unfortunately there had been reports of unoccupied boats being broken into at Kildwick and Skipton. The police had increased patrols in the area, but it still seemed like a good idea to avoid going further on for a while. So, we changed our original plan, which was to moor at Kildwick, and instead, with both David and John promising to look in on Legend every couple of days, we locked it up and left it at Brunthwaite bridge while we went off to Ireland to see Chloe, Shandy, Caleb and Matilda. We had an early evening flight from Leeds Bradford, - just up the road and a first for us. 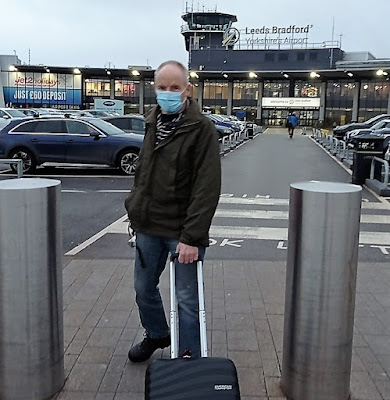 It was all very easy and slick; we were in, up, down, out and hugging our very excited grandchildren in no time. 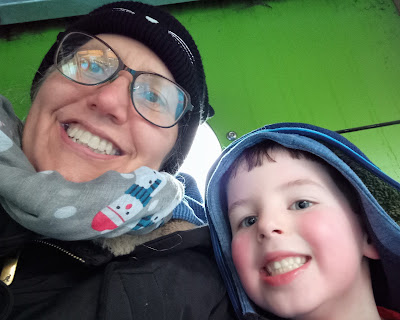 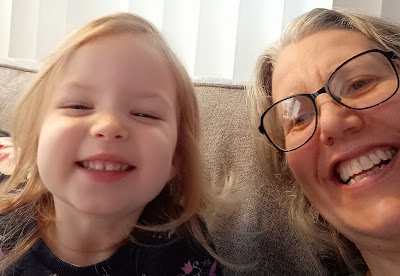 We had intended to stay for a week, but as soon as we got there we knew that was going to be too short, so Ann-Marie phoned up and changed the flights and parking to give us two more days. That meant we’d be able to help Chloe with the kids while Shandy was away to Scotland for some ice climbing experience - another step towards his mountain leadership qualification - and it also meant we’d be there over two Saturdays and a perfect opportunity for a spot of parkrun tourism. Chloe ran the London Marathon several years ago, but work, kids and life in general have meant she’s not done much running recently. However, she’s had a parkrun barcode for a while and never used it, so she jumped at the chance to join us (and 200-odd other hardy souls) on Saturday morning at Antrim Castle Gardens. 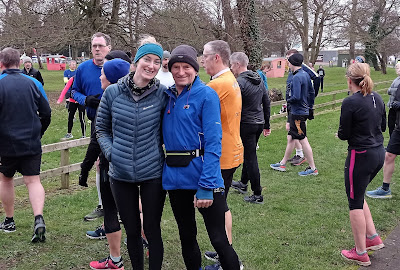 (To be fair, she figured that as was going to have to give us a lift anyway, she might as well join in.) Ann-Marie was bar-code scanning and clocked Chloe at 33:24; impressive with no training whatsoever, and a good incentive to come back for another go.

On the Monday Shandy took Dave out to the east coast to Newcastle, where they met up with Sam and Mark for a “wee dander” (which roughly translates to “a vertical scramble up unforgiving granite and heather”) up Chimney Rock and Slieve Donard, two of the “Irish 100”. 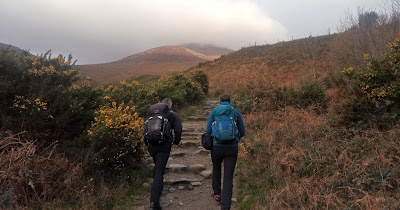 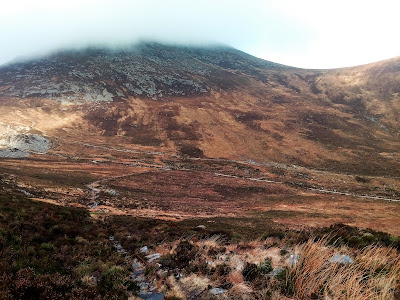 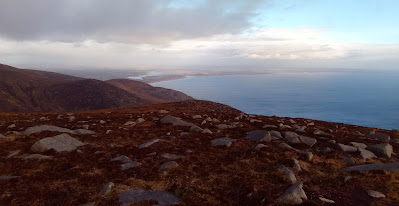 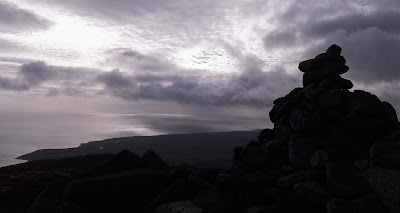 The overgrown tracks of an unbelievably steep incline railway still remain from when there was a working quarry on Chimney Rock. The boys followed these up to Carrs Face, then scrambled up to the 660m summit. That was enough for Dave for one day; it was the first time he’d done any serious hill climbing since we were up in Lancashire and Yorkshire 7 years ago and twinges in his knee and foot told him it would be a mistake to overdo it. When they got back down to the saddle and the Mourne Wall, Dave took the quarry track back down to sea level and the car park while the other three climbed up another 200m to the summit of Slieve Donard.

The rest of our holiday was full of real quality time getting to know our grandchildren again after so long without seeing them. 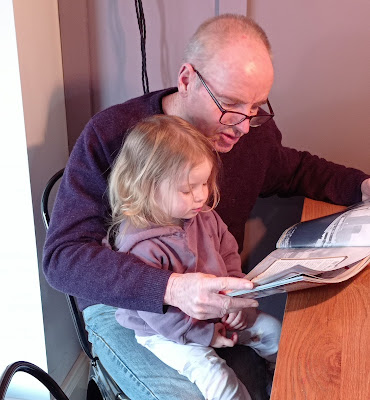 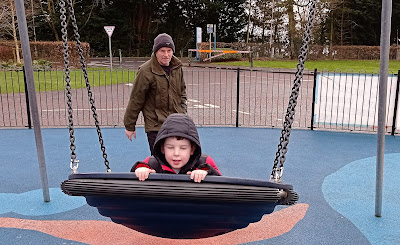 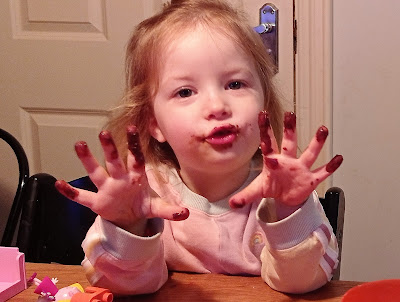 Sunday afternoon came around far too quickly and we had to say goodbye. We came back just as Storms Dudley, Eunice and Franklin began following each other across the UK, so the flight home was a trifle bumpy. With the jet stream behind us we got back 20 minutes ahead of schedule and came down hard, fast and sideways in a snowstorm. According to David, who used to work up there, being on top of a Yorkshire moor with its runway perpendicular to the prevailing wind, means that landings like that are par for the course at Leeds Bradford.

It was sad to leave our little Irish family, but good to find Legend safe and sound. The ravages of Storm Dudley hadn’t swept it over to the other side or whisked any of our roof-tat into the water, so it wasn’t long before we had the fire lit, the dinner in the oven and the electric blanket warming the bed up.

The next morning, making the most of the relative calm between storms, we set off in the frosty sunshine for Kildwick, stopping at Silsden for water. On this section of the L&L the CRT sanitary stations are at Bingley, Skipton and Gargrave, but the winter maintenance closures and emergency repairs meant that Bingley and Gargrave were unreachable, so the people at Silsden Boats were very kindly letting passing boaters use their tap. As well as a poorly knee, Ann-Marie had come back from Ireland with a nasty cold, but she bravely battled on, working all the swing bridges without complaint.

Just after the last swing bridge we met David who was out for a walk with Dylan...

...so we boated alongside them into Kildwick. As we were tying up the weather turned and we could see grey mist rolling down the valley towards us, so we all piled inside for a brew and a warmup till it had passed.

David had a Significant Birthday during the following week and we felt very honoured to be included in the family celebrations, which lasted for all of it. First there was lunch at Bistrot Pierre in Ilkley... 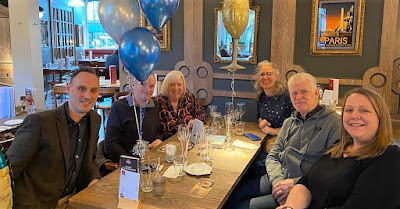 then an evening in Otley Courthouse theatre to see Kris Drever, and finally a brilliant family party in Emma’s house with wonderful food and far too many cocktails. 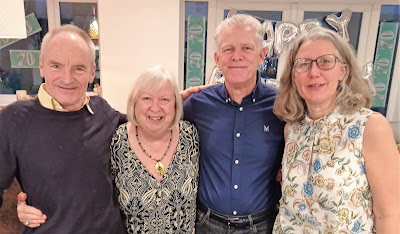 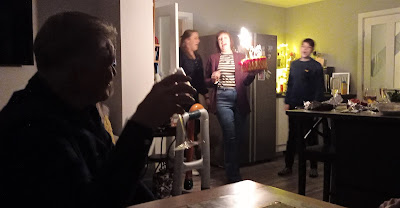 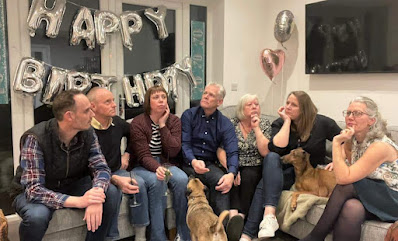 What a fabulous way to celebrate!

We stayed over on Emma’s very posh airbed before reluctantly going home to get Legend ready for the next adventure. Frankie, Harry and Thibault were already in the UK visiting their family in Hoddesden and would be on their way up to stay with us in a couple of days, so we were tremendously excited, with lots to do and lots to plan. Having not seen any of our kids and grandkids for ages it will be great to get to see them all in a fortnight. Hopefully in the future, as the world comes round to the reality of living with Covid, we’ll get to see them more often again.