Many apologies, Dear Reader. I thought I’d published this post before Christmas, but here it is patiently waiting on the laptop.

Well as you might imagine Dear Reader, with a month of lockdown No.2 followed by a spate of tier 3, there isn’t a lot to report.

As planned, when we got short of water, we dropped down the two locks to the tap... 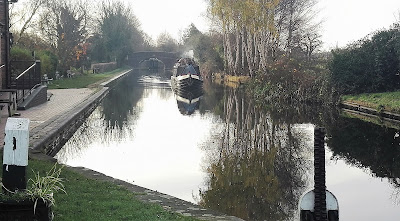 ...filled up and reversed back up one of them to the Dog and Doublet, where we stayed for the next three weeks.

While we were there Dave managed to do enough scavenging to refill the firewood box, which was handy. Last year at Wallingford, we ran out of wood completely and spent the entire winter on coal; very easy and controllable, but not cheap and it doesn’t keep you fit like wood collecting does. When Dave is outside with the bow saw cutting logs up, he gets a constant stream of passers by telling him that fire wood warms you up twice.

The up-side of not moving the boat has been that we’ve been able to properly explore the beautiful Kingsbury Waterpark and the RSPB Middleton Lakes. These are former gravel pits in the Tame Valley just south of Tamworth and regular walks around the lakes with camera and binoculars have kept us sane during our extended stay. 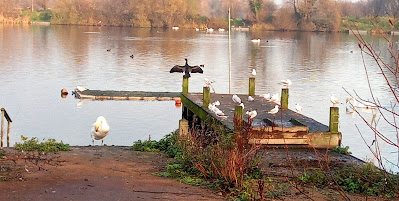 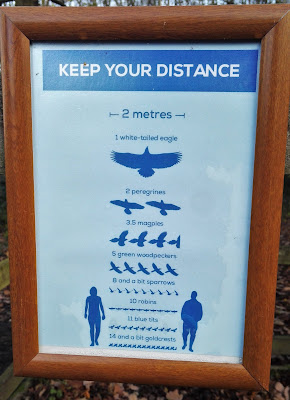 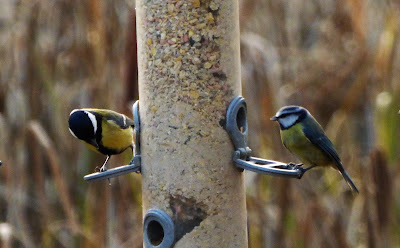 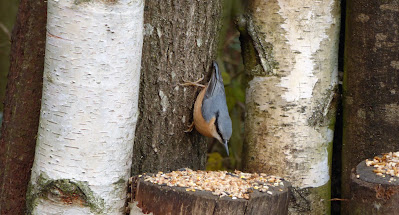 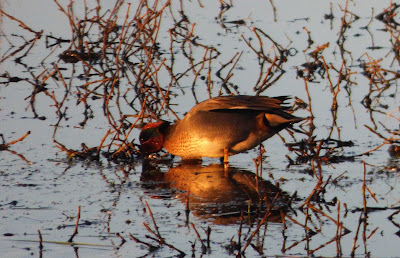 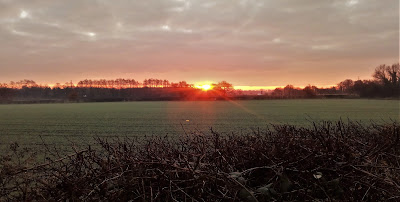 And of course, three weeks of having our bird table up in the same place meant that we had plenty of regular feathered visitors outside the boat window. 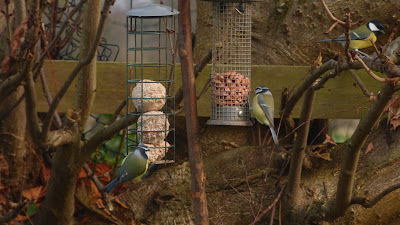 When we replaced the brake pipes on the Kia, we had a two foot length of 3/16” cupro-nickel pipe left over. By happy coincidence that is the exact size of the leak-off pipework on the Lister. The leak-off pipes carry excess fuel from the injectors back to the diesel tank, so they’re not under pressure, but ever since we’ve owned Legend the compression joints have been damp. As he had it all in bits, and a three week window, Dave took the time to get some new compression fittings and a few spare olives and do a proper job of it. He even incorporated an anti-vibration loop. 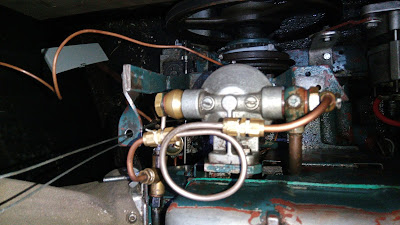 We got the new stuff off Ebay, and had it delivered Click and Collect to the Nisa shop in Kingsbury. Not all Ebay sellers do that, but if they do it makes mail order very easy and convenient for us and we’ll be doing it again whenever we can.

On Dave’s birthday the second lockdown ended, so to celebrate, we made a picnic and drove over to Hopwas for a walk through the woods. Unfortunately the red flags were out on the firing range, so we walked round the edge instead. 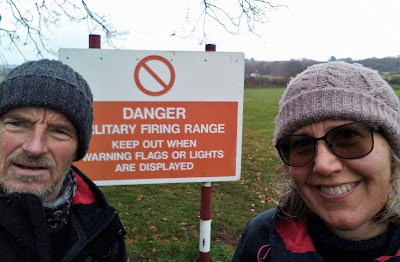 And it was far too cold for a picnic, (what were we thinking?) so we brought it home and ate it in front of the fire, followed by birthday cake and a film. 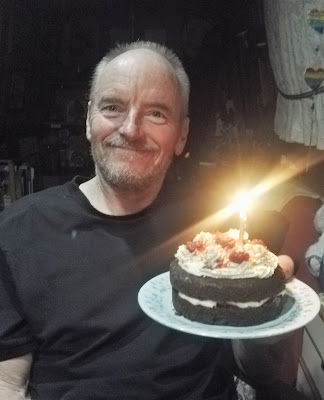 As we weren’t going anywhere, we got the dining table sanded down and re-coated with 4 coats of Ronseal clear yacht varnish. Over the years, the previous finish had got a bit worn, especially at the edges where our forearms rest on it. 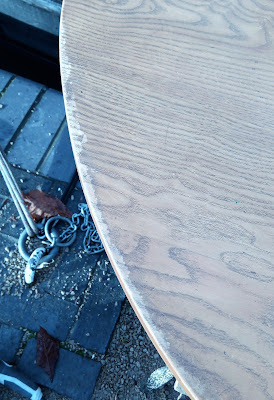 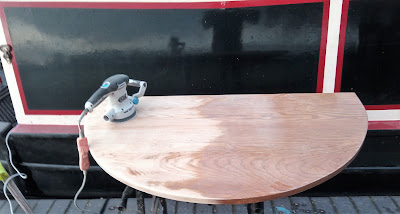 The new varnish really brought the grain pattern out and it looks really good and shiny again we’re very pleased with the result.

With all the travel restrictions during lockdown we were over a month between the hotel and the pub at Bodymoor Heath. When we finally did move from the Dog and Doublet it was only to go down the rest of the Curdworth flight to the Waterpark mooring about half a mile away. 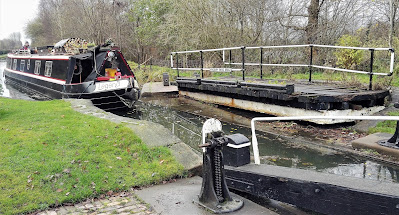 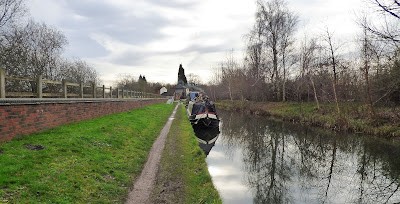 Not much of a move, but enough to count, and it took us past the tap and the bins.

That half mile made walking into Tamworth - something we’ve not done before - seem much more feasible. Despite having passed this way several times, despite having driven to the outlying supermarkets, and despite having had new tyres and even an MOT done here, we’ve never walked round the town itself. We’ve missed a little gem. 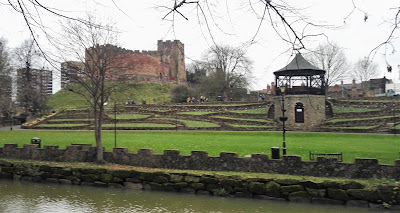 The frontage onto the River Anker is very pretty with the castle remains behind it, and although we didn’t spend a long time in the town centre we still managed to get a couple of Christmas jumpers and a purple coffee from Costa before walking back. The path along the bank of the River Anker to it’s confluence, and then along the River Tame to the canal aqueduct was very well paved and nowhere near as muddy as we were expecting. All in all we had a lovely day, made all the better for getting to see Nigel at Glascote boat yard, and we look forward to going back to Tamworth after the pandemic is over.

After only three days at the Waterpark we set off up the last bit of the Birmngham and Fazeley. On the way we stopped outside the marina for water and to empty the cassettes and the recycling, then  turned right onto the Coventry.

At Glascote locks we met a beautiful reproduction tug called Ted which mad us drool a bit, then we carried on to Poleswoth where we moored up on the rings just before the Bull’s Head.

Without much boat moving, we hadn’t really given the engine a decent run since the rebuild so the three hour trip round to Polesworth was it’s first proper test. When we stopped the Dave checked the oil and was dismayed to find that the level had gone up, meaning we had a leak from the diesel pipes that run inside the engine. We’ve had this happen before, it’s something that Listers are known for especially after parts have been disturbed, but it meant we’d have to stay put till it was sorted out. Dave started by running the engine with the rocker covers off, and he could see that the high pressure pipe unions on two of the injectors were dribbling. He tried tightening them up but it didn’t work and he ended up overtightening them. On closer inspection it looked as if the collars inside the unions were worn and/or fractured. 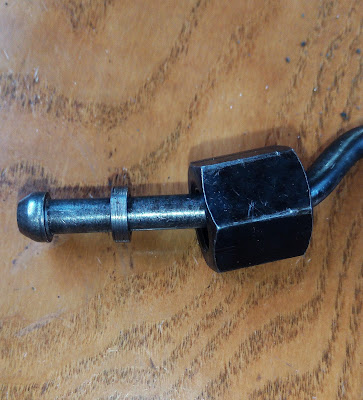 The Lister specialist who we got the pistons and barrels from has his industrial unit in Walsall - only 40 minutes away - so we gave him a ring and asked if had a couple of new injector pipes. He thought he did, but it was Friday and he wouldn’t be back in the unit till Monday. We’d have to wait to find out if that would sort it out.

Over the weekend we met up with Kim & Luke and the boys in the little park by the river, they live in Dordon, a 20 minute walk up the hill from Polesworth, so it was really good to be able to meet up outside while were there.

We decided to make snowmen out of branch slices for Christmas presents, so Dave set up Santa’s workshop in the dining room while Ann-Marie started knitting scarves. 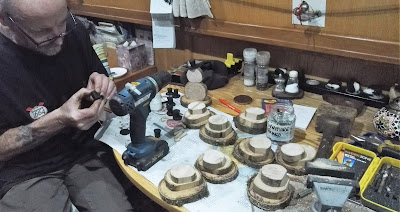 After a bit of experimenting we found that the best way of attaching snowmen bottoms to snowmen tops and snowmen hats was by drilling a hole all the way through them and using a wooden kebab skewer.

On Monday morning Dave walked back to Bodymoor Heath for the car. Although it’s a good 20 miles by canal, it’s less than 10 as the crow flies and he had a very nice walk despite half of it being through an industrial park, mainly because he came across a snack bar and got a very welcome cup of coffee. 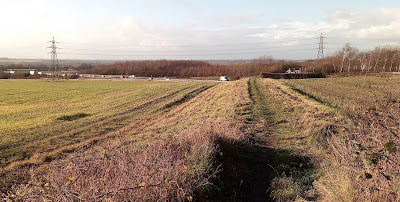 Back at the car, he drove over to Walsall where he picked up the new injector pipes and did a spot of shopping before coming back to the boat just as it was getting dark. There never seems to be enough daylight in December to get anything done.

In the morning he was back in the engine room. Frustratingly, the new pipes didn’t stop the leaking. Dave was very unhappy and gave up in despair.

In the afternoon we walked up to Dordon to meet up with Kim and the boys after George came out of school, then had a look at the Dordon Christmas lights and did a raid on the Co-op before coming back to the boat.

The next day was Ann-Marie’s birthday. Dave was back in the engine room in the morning getting even more frustrated, but he gave up again and we went to Telford for a bit of Christmas shopping and a birthday latté. When we got home we cut some replacement bases for the snowmen, because the original ones had dried out inside the boat and cracked. After a matinée film Ann-Marie made a delicious lasagne for dinner followed by birthday cake and a quiz night.

Back to the ongoing engine saga. After asking on the Lister engine forum and talking to Paul in Walsall, we decided to get a new set of injectors. (Which will be reconditioned exchange ones. New ones don’t exist.) It’s something we’ve been toying with for ages, it’ll help with the smoke issue, but they’re £70 each and the old ones still work, albeit not perfectly. However, if the union where the pipes join is worn or misshapen and is causing the leak then that’s what we need to do. Paul had some, so we arranged to pick them up the next day, along with a couple more new pipes. While he was collecting them Dave had a chat with Paul and picked up a few tips about fitting them, including making sure that there is a fibre washer installed on the end of the injector, but ONLY ONE. He said it is quite common to come across engines where someone has replaced the injectors and assumed there was no washer in place (because it just looks like metal) and put another one in. He said finding three or even four is not unheard of. Of course each extra washer moves the injector nozzle further away from the ignition point and makes the engine less efficient. Dave had a look and found that two of ours had two each, and the other on had three. He took them all out which meant taking the cylinder heads off again to make sure he’d got all the bits of washer out, but he came out of the engine room feeling more encouraged than he had in weeks. The new injectors not only cured the leak, but virtually stopped the smoking.