Thursday 10.02.2011
Like a well-oiled machine, today went perfectly to plan. Maui took their van back with friendly efficiency and returned our security deposit. Would we recommend them? Certainly. We took Kiwi Ken on a 7500km trek up mountains, down gorges, along gravel roads in the middle of nowhere, stopping wherever we felt like it for tea, food, a look at the view or the night, and he behaved impeccably. The staff couldn’t have been more helpful and even though we had the smallest van in their range he was quite big enough for the two of us. After handing the keys back we were once again homeless with all our worldly possesions on a trolley. 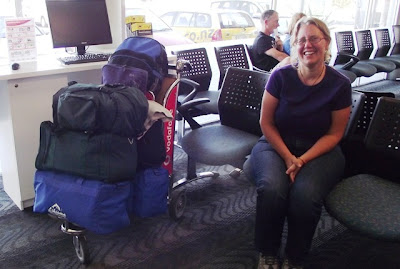 The flights were almost un-eventful; there was a bit of a drama when the cabin crew called for anyone with medical training, but happily it was nothing serious, although for a while we were in a scene from the film “Airplane” with a line of people almost falling over each other in their eagerness to offer assistance. “Surely there’s something we can do.” “Don’t call me Shirley.”
This is our luggage being loaded onto White Knuckle Airways bound for Cairo.

Then, when we landed at Melbourne, two men from the Quarantine section came on board and whisked one of the passengers away before we were allowed to disembark. We reckon it was the squawking noise coming from his enormous hat that gave him away.

We touched down in Adelaide bang on schedule at 5.10pm, but by the time we’d taxied to the gate and made our way to the carousel, Dave’s Uncle Michael - who was waiting to pick us up - had searched the airport twice and was having a third look behind the vending machines. Happy hugs and hellos, then all our stuff in the back of Michael’s van and off we went to Julie and Ian’s beautiful home in Adelaide. 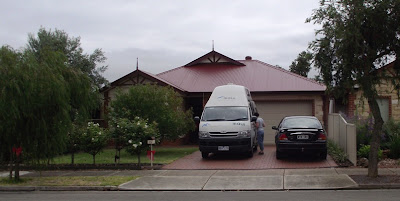 We’re staying around Adelaide and Christies Beach for the next few days while we pick up our next van and meet all Dave’s cousins who live round here.
at February 13, 2011