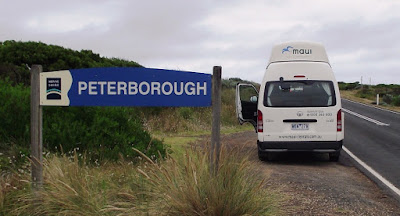 We finally got to Warnambool and turned onto The Great Ocean Road. The first 35km from Allansford to Peterborough isn’t very exciting, or very oceany, but after we got to the Bay of Islands it got a whole lot better.

There are big, impressive limestone stacks, caves and arches along this coast and they all have names and viewing platforms with car parks signed off the road. You do feel a bit “Off the bus – Click – back on the bus” kind of thing, but it has to be like that or people would either damage themselves or what they came to look at. This is London Bridge.

There used to be another arch joining it to the mainland but it collapsed on the 15th Jan 1990, stranding two people who had to be lifted off by helicopter. Rumour has it that they were very embarrassed as they were having an affair at the time.

This is The Arch. 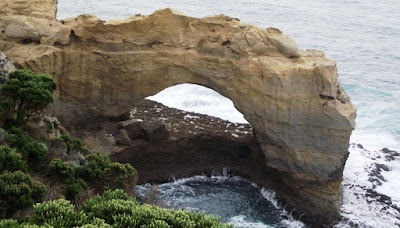 We spent the night in Port Campbell.

We were up early, the milk had gone off overnight, (there’s something wrong with our fridge, when we get to Melbourne we’ll get Maui to have a look at it) so no morning cuppa. We got to the Loch Ard Gorge before the masses and spent quite a while exploring. We walked down onto the beach, round the cemetery and down the steps into the gorge itself. While we were there we saw an Echidna; 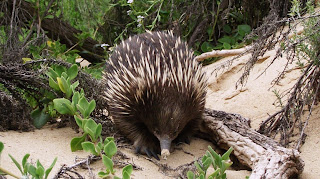 a cross between an ant-eater and a porcupine. They’re supposed to be very shy, although this one was a bit of poser.
Next stop was the Razorback.

Then the Twelve Apostles. There are penguin colonies along here; we didn’t see a penguin but these are the tracks they made going into the sea that morning.

After the limestone gives way to other rock, the road really starts to impress as it winds round bluffs and into gullies.

We stopped at Sheoak Falls. 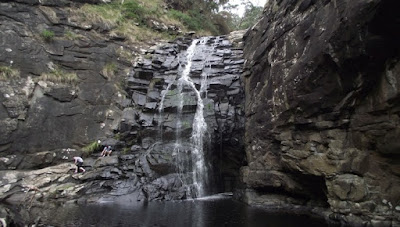 Very pretty; imagine what they’re like after heavy rain. We also saw another koala and Dave had a go at landscaping. 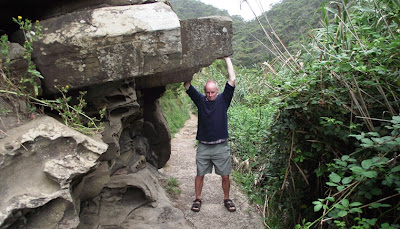 We did some shopping in Apollo Bay. (A cup of tea at last!) Then carried on up the coast through Lorne to Anglesea. The road has one last tight bunch of hairpins at Eastern View before it goes under the Memorial Arch and starts to level out. This plaque is beside the arch. Once we were off the scenic trail we put our foot down and headed for Geelong for the night.
at February 20, 2011