Today was pretty much all driving, and sadly, not on wonderful twisty mountain roads, but on Highway 1 through Auckland. For the most part it’s motorway, but it does go past the Sky Tower 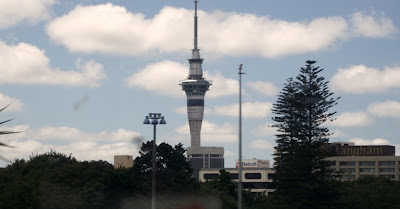 and over the Auckland Harbour Bridge, both of which are worth a look. Before that we drove from Coromandel Town along the side of the Firth of Thames to Thames, where we found a bakery and some yummy stuff for lunch. Then we went across the Waihou River and its wide delta where we found this. 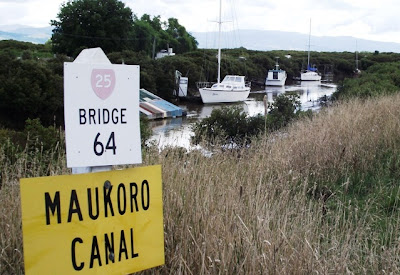 We’ve seen quite a few canals in NZ, mostly for hydro power, some for drainage, but this was the first one we’ve seen with boats on it. We think it’s the Kiwi version of the Middle Level; a ditch that some fool put a boat in.

We got off the motorway once we were north of Auckland and headed out onto the Whangaparaoa Peninsula. As we got towards the end it all looked a bit crowded and touristy, so we went a bit further up the coast to Orewa. The tide was coming in over a big flat beach when we got there, so even though it was nearly 7pm the sea was still warm enough for a splash about in the breakers. After that we had a walk along the estuary 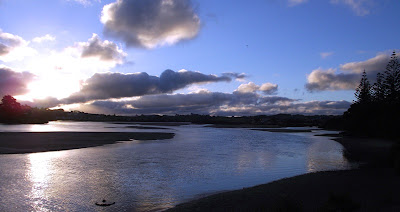 and watched the sunset before coming back to the van for tea. These flowers were in gardens at the side of the path. 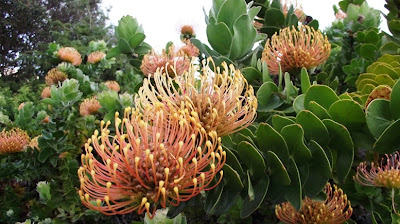 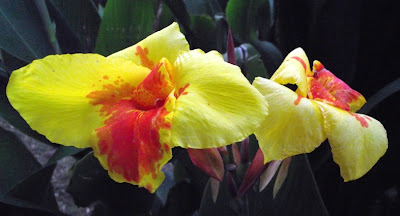