There was a boardwalk through the Mangrove swamp at the edge of Rawene village, so before we left in the morning we had a short, but very interesting history lesson about how the site of one of the biggest saw mills in NZ is now being reclaimed by native habitat. Back in the van we continued on Highway 12 towards the west coast. At Opononi we stopped for a walk along the beach. This enormous sand dune is on the other side of the Hokianga Harbour where it finally meets the Tasman Sea. 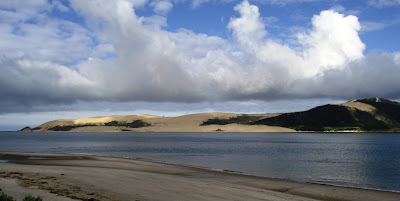 There is a water taxi over to the other side which takes people over for a spot of tobogganing down the sand.

At Omapere we drove up to the South Head lookout and spent half an hour over-awed by the splendour of it all. 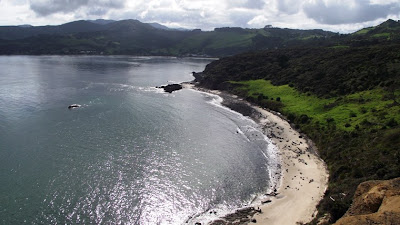 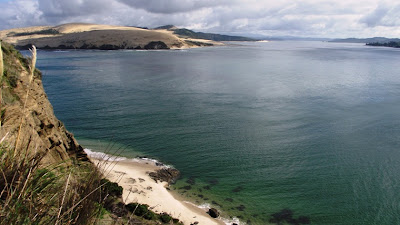 After that we turned south, still on the 12 and wound our way into the Waipoua Forest, home of the Kauri Sanctuary and Tane Mahuta, ‘Lord of the Forest’; the largest Kauri in the world. Kauri are trees. Big trees. To the Maori they’re sacred and all the really big ones have names. They occasionally used smaller ones for their canoes, but even they were huge by our standards. When the Europeans came they felled thousands of these ancient trees for ships and buildings. Now the remaining few are carefully preserved and revered as much as they ever were. On the walk down the path into the forest, there are information boards telling you all about Kauri, but no matter how much you read about girth and height and cubic meters, nothing prepares you for this. 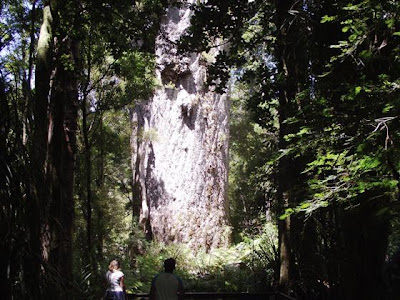 It’s like a wooden cliff. This is the second largest, and was already growing when Jesus Christ was lying in a manger. Standing in the same spot, Dave took this, 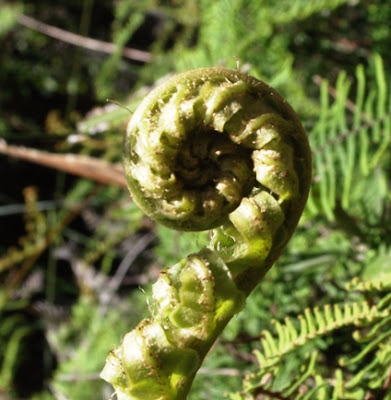 which we thought was rather poignant.

After that we re-traced our steps back to here.

Auckland; City of Sails. As you know by now we’re not that good at cities, but we thought we’d make an effort, what with it being the biggest, and covering a greater land mass than London, and being built on 21 extinct volcanoes, and having the tallest tower in the southern hemisphere. We found a nice little leafy suburb and had dinner, before wandering down Queen Street and immersing ourselves in the buzz of city nightlife. This is the base of the Sky Tower. 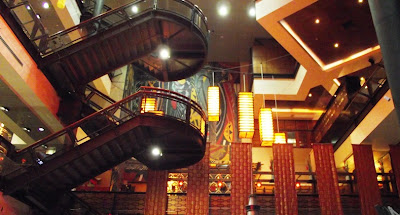 After a good look round we decided that a morning of Auckland sightseeing would be a fine way to spend our last day in NZ.
at February 13, 2011