There was a women’s “Duathalon” event taking place in the park just behind where we’d parked this morning, so we went to have a look. The event consisted of a 1.5km run, followed by a 15km bike ride, then another 1.5km run. We got there in the middle of the first transition. Lots of fit, and not-so-fit-but-enthusiastic, women were putting an awful lot of effort into the event. 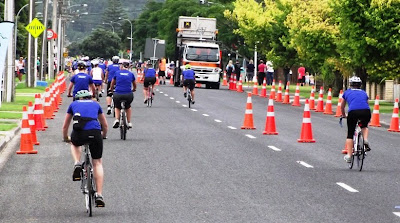 It was all very inspiring and we stayed to cheer home the winners before carrying on up the road north.

We stopped at Piroa Falls. 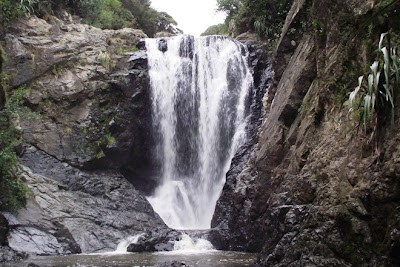 There is are three swimming holes at the bottom and although we took our cozzies with us, there were quite a few other people there, so we had to make do with a paddle.

Next stop was a public toilet. These aren’t just any old loos though, they’re the Hundertwasser Toilets in Kawakawa and they’re world famous. 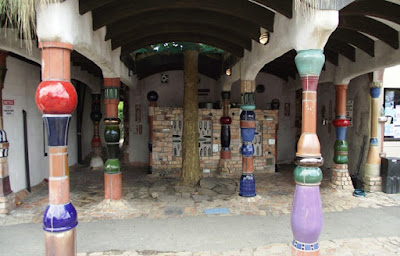 This is the window in the Gents. 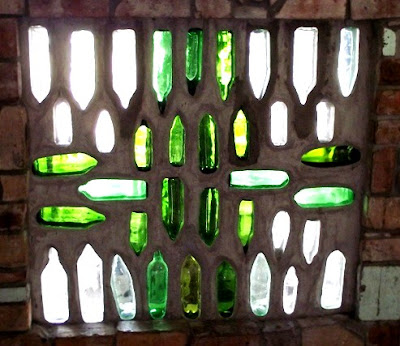 The whole town is a bit quirky; this is the base of one of the street lights. 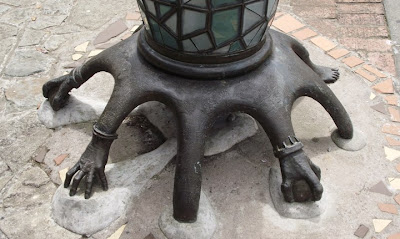 From there we went up the coast, past Opua and the ferry to Russell Island, and stopped in Waitangi. This is a very famous town in NZ’s history. The Treaty of Waitangi brought peace after the wars between the Maouri tribes and European settlers in the early 1800s.

Coincidentally it was signed today, the 6th of February, in 1840, so today is Waitangi day! The main road through town was closed and everyone was out celebrating or, it seemed - if they were under 16 - jumping off the bridge into the river. We went along and joined in the party. This is a Kiwi hot dog; 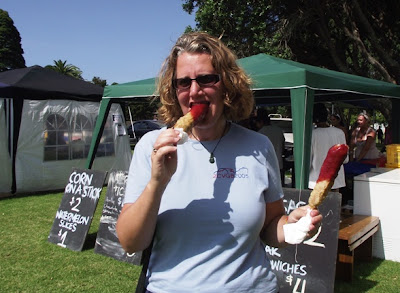 we’ve been meaning to try one since we first saw one. It’s a deep fried battered sausage on a stick dipped in spicy ketchup. It looks awful but it tastes great, and nobody bats an eyelid as you walk off eating it.

As the crowds were thinning out we went to the Waitangi Treaty Centre where we found that in the spirit of celebration, today was free entry day! We could have spent a whole day looking round; the most spectacular exhibit is a war canoe

which was made to celebrate Waitangi Day in 1940 using traditional methods. The carving is amazing; this is the prow. 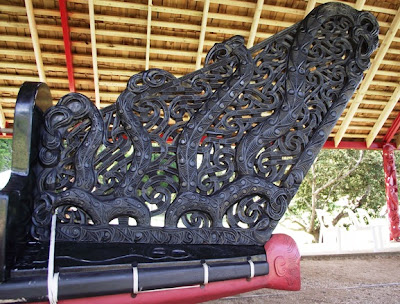 This is a picture of this and other canoes in the water for the 1940 celebrations.

We found lots more amazing carving in the Marae, or meeting house. 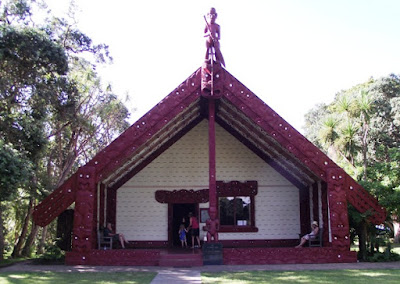 It’s the first time we’ve ever been inside one; this is what we found. 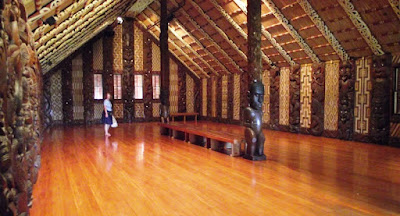 Every carving is different and incredibly intricate 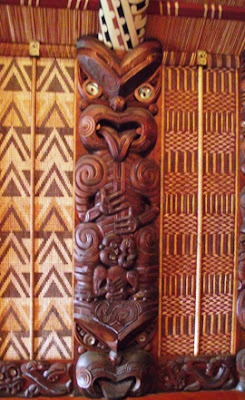 and the panels between them are made from woven flax. We got back to the van about 6.30 and it was still really hot and muggy; only one thing for it – a dip in the Pacific before tea. 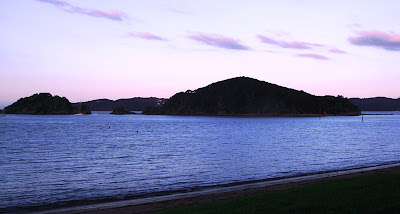 Where we were parked was smack on the main road so after tea we cleared off to Kerikeri. This is the furthest north we’re going; we’ll have a look round tomorrow before heading back to Auckland for our flight out to Adelade on Thursday.
at February 06, 2011