As there were several walks starting from our camping ground and it was a nice sunny morning, we followed a sign for “Rivendell”. After half an hour of rain-forest track we came to the film location from Lord of the Rings. There’s no evidence of the film set now, but that doesn’t stop it being a magical place, especially as it was all misty where the sunshine was catching the wet grass. 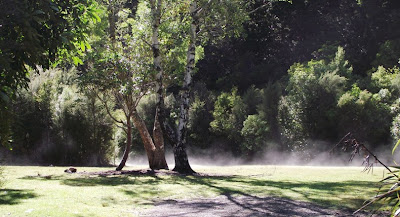 We’re following Highway 2 for most of this week, after leaving Wellington the first important thing it does is climb the Rimutaka Pass. 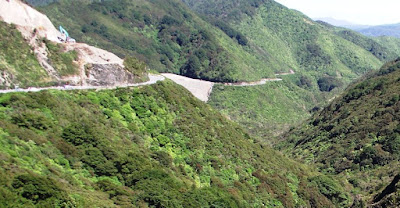 There’s quite a bit of work going on to modify a couple of the biggest bends, the amount of earth and rock moving that has to take place is incredible.

Further up Highway 2 we almost drove past a sign pointing to “Stonehenge”. Couldn’t resist that one! Stonehenge Aotearoa turned out not to be just a copy of ours, but a fully functioning astronomical instrument, designed by the local astronomical society specifically for where it is. 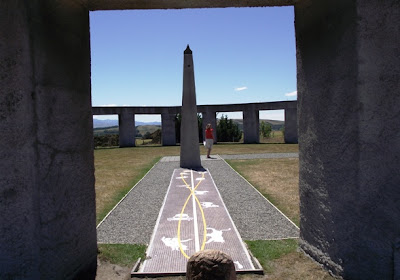 Although we were a bit sceptical when we arrived, by the time we left we were thoroughly impressed and quite a bit wiser.

Our camp-site for the night was as basic as it comes; $5 a night with a loo and a tap, just outside a lovely little pioneer town called Norsewood. This area of NZ; the Tararua district, was settled by people from Scandinavia around the 1870s. There's a pioneer museum in the town, so we'll have a look in the morning. We had our tea then went to bed looking out over sheep and mountains.
at January 25, 2011