The whole of today was spent on Highway 6, or just off it, in the rain. After such a scorcher yesterday it seems impossible that the weather could have changed so dramatically.

From Lake Wanaka we drove up the Makaroa River valley in the increasing drizzle, stopping at Blue Pools, where there was a very wobbly suspension bridge and some fantastic deep, clear pools in the river. 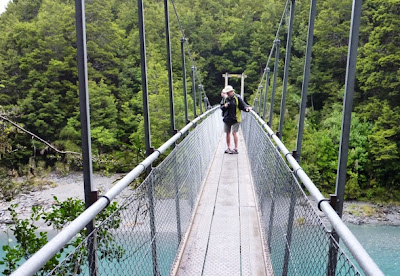 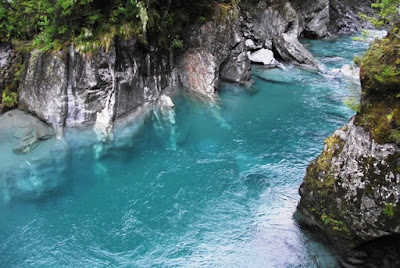 We got back to the van, hung our wet things up and carried on. We drove up and over the very dramatic Haast Pass and Gates of Haast 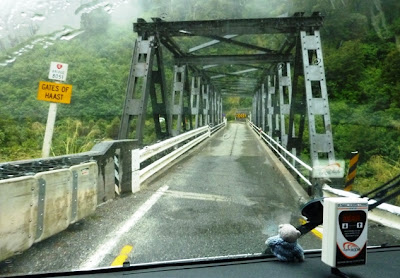 then followed the Haast River to, of all places, Haast Village and Haast Beach where we got some very expensive - but unobtainable anywhere else for 120kms – diesel. Shortly after that we saw a little sign pointing to a little fishing village and advertising Whitebait Patties 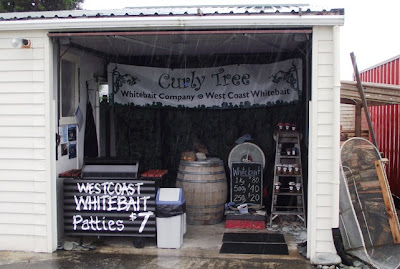 we’d heard about them, so we pulled in. A very friendly Kiwi made one for us; it’s basically a whitebait omelette sandwich. Doesn’t sound too clever but it is delicious We bought some eggs and home-made jam as well. Yumm!

A bit further on we stopped at Ship Creek for lunch; the rain had slowed down to drizzle again so after toast and jam we tried to go for a little walk along the shore, however the sand flies soon had us heading back to the van. We’ll have to get some better insect repellent while we’re on the west coast.

We stopped again at Bruce Bay; Dave made a penguin out of pebbles 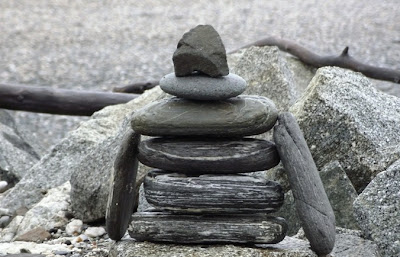 then we drove on to Fox Glacier. We put our wet macs on again and sploshed up to the information sign, to find that as the path had been washed out we couldn’t get up to the glacier. 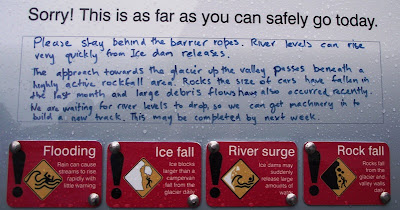 We tried another path on the other side of the river, which meant another trip over an even wobblier suspension bridge, only to find that that was shut too. With the van looking like a laundry we went 30kms further on to the Franz Josef Glacier. There was no problem reaching this one, just an hour’s walk in what was fast becoming a downpour. 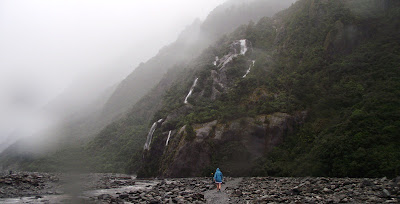 We kept telling ourselves that this is a once-only trip, we’re not coming back, if we don’t see stuff this time we never will, and it’s only water. Half an hour later we were at the foot of the glacier and at the point where we couldn’t get any wetter. 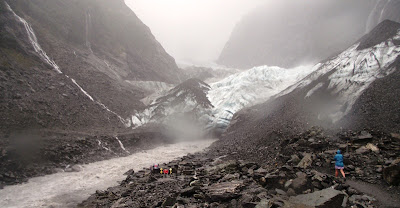 It was worth it though; it is truly breathtaking. As we walked up the alien landscape of the valley below the glacier, looking at the waterfalls crashing down the steep sides and seeing the raging torrent of cold, grey water pouring out from beneath a vast wall of ice, it made us feel very small.

The size, the power, the mind-boggling age of the ice, the sheer beautiful brutality of it all is something we won’t forget. Another half- hour later two very wet, but happy, travellers got back into the van, changed into dry clothes for the second time that day and set off to another DOC camp site on Lake Lanthe. When we got there the picnic tables were under water, so we parked as far from the water’s edge as possible.
at January 19, 2011