From Kaikoura we went north to Blenheim where we had a couple of hours on-line in the library. Blenheim is one of the big wine producing areas in NZ and large, neat vineyards stretch away from the road as far as the eye can see.

In the afternoon we drove up and over the Mt Richmond Conservation Park to Nelson on the ever stunning Highway 6. Nelson is the second biggest city in NZ, but it still manages to have a happy, little sea-side town atmosphere. We pulled into the car-park next to the information centre in the city centre, to find it not only had public loos, but also free one-night camper-van spaces. Result! We locked up and went for a walk along the river-bank at the edge of the city, where we came across a Tui. 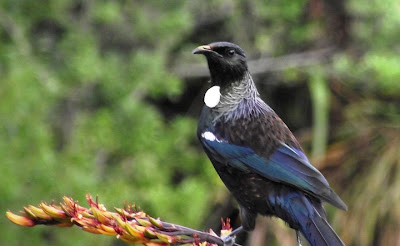 The white bit on its throat isn’t something that got stuck there, it’s part of its plumage. We then followed a path up Botanical Hill to “The Centre of New Zealand”. This point, at the top of the hill, is where early surveyors took references from when surveying the country. 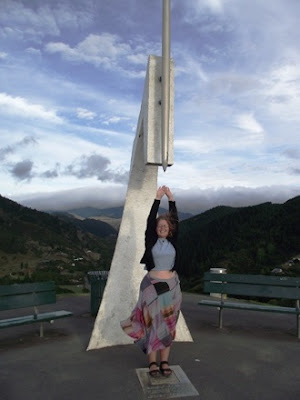 From the top the whole of Nelson is spread out below you.

And the Conservation Park behind it. 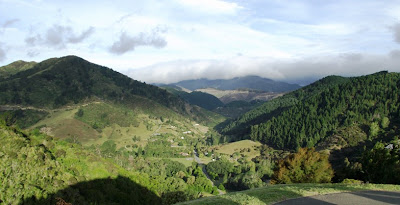 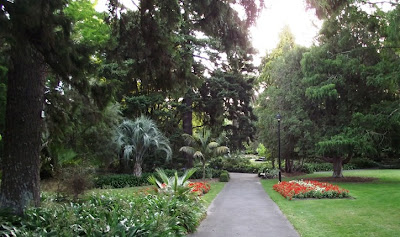 a beautiful botanical garden from that was planted in the late 1800s. Most of the original trees are now giant specimens, and two years ago a corner of it was transformed into a Chinese ornamental garden. 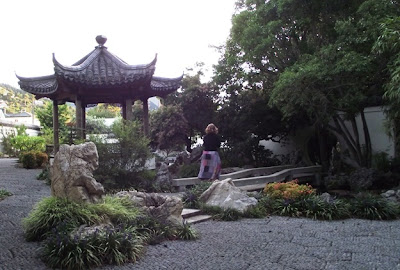 We walked back to the van via a kebab shop and, apart from two fire-engines responding to a false alarm at a nearby café at 1am, we had a peaceful enough night.
at January 22, 2011