We left Dunedin on the coast road in the morning, stopping for elevenses at Brighton. We caught up with Highway 1 again and followed the Southern Scenic Route. This is well signed and really shows off the best of the lower South Island. It leaves Highway 1 at Balclutha where we did a bit of shopping, and goes right round the Catlins Conservation Area on its way to Invercargill. We took a diversion off to Molyneux Bay

and had lunch at Kaka Point looking out over a very fierce looking Pacific. In the afternoon we followed the signs to Nugget Point, where we saw some spoonbills nesting on in the incredibly steep cliffs with some more fur seals on the rocks at the bottom. We had a windswept walk out along the path to the lighthouse. 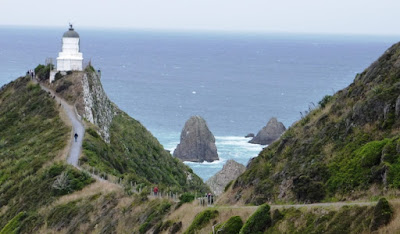 There was a Yellow Eyed Penguin colony on the other side of the headland; the information board said that the best time to see them was after 4pm. Guess what? Yep. On the dot. We walked down to the hide and looked out of the window. As if we’d ordered it a solitary penguin had just come out of the water and was standing on the beach preening itself. 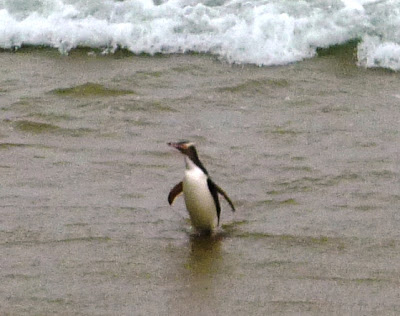 Just before we left it was joined by another one. These are about 3 times the size of the little Blue Penguins, but just as cute.

Back on the SSR we carried on towards Invercargill, turning off to have a look at Porpoise Bay. A little way down this very quiet road we came to the township of Waikawa where there was a mobile fish & chip shop next to a car park with some public loos. We can take a hint. After we pulled in we were joined by 2 more vans with the same idea. Very peaceful night.

We continued down the Porpoise Bay road to Curio Bay and finally a car park where we left Kiwi Ken and followed a path to Slope Point; the most southerly point of South Island. There’s nothing between here and Antarctica except stormy seas. 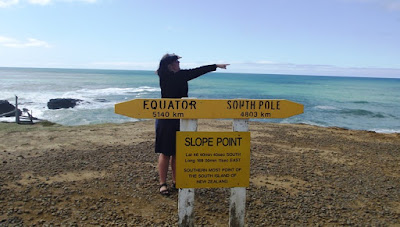 We finally got into Invercargill just after 12. We found a dump point and washed out then parked up and had lunch. Later on we went for a quick look round, bought a camping toaster (crumpets for breakfast. Mmmm!) and had a coffee in McWifi. Ann-Marie managed to transfer our unresponsive e-mail account from Live to G-mail and got it working. She’s a star! We can now get back in touch with everyone, except that we reached the download limit so it will have to wait till next time. 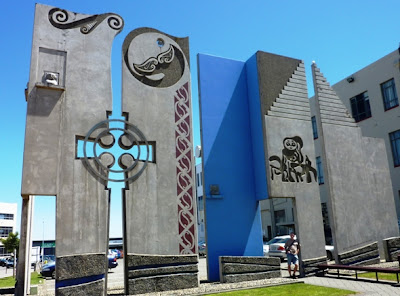 From Invercargill we headed west, again following the SSR, this time on Highway 99, round the Longwood Mountains and the Longwood Forest Conservation Area. We got to Tuatapere at 6.20; the petrol station shut at 6. Because we’d only got ¼ of a tank left and the next place we were sure would have diesel was over 100km away we thought it best if we stayed put for the night. We did have a little drive out on some gravel roads to a couple of local beaches

but there wasn’t anywhere to park so we returned to the town and stopped on the side of the road near the loos.
at January 16, 2011