We got the van fixed today – twice. After breakfast we went to Maui’s service garage in Queenstown, where they fitted a new grey- water spout, replacing the one we broke yesterday. Then we drove off on highway 6 towards Cromwell and Wanaka We stopped at Arrowtown; an old prospecting town with a restored Chinese gold-mining village. Conditions for those who worked here were grim, to say the least. 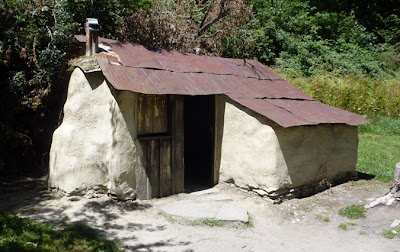 We followed the Kawarau gorge and stopped near Giibbston to watch some insane people bungie jumping off a bridge. 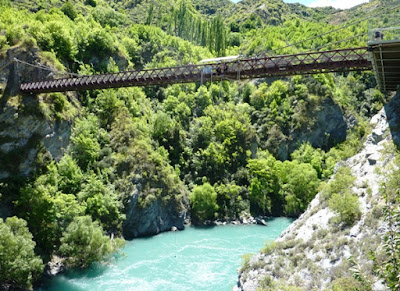 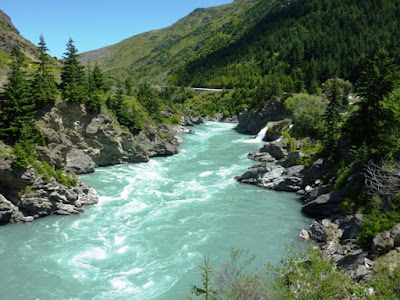 there was a picnic site next to it so we stopped to have lunch in the shade of some eucalyptus trees. As we were pulling out we went down a pothole in the entrance and there was a loud clonk. We looked back to see our newly mended waste pipe lying on the floor, this time with its tap and bracket, and a big puddle of water where our tank was happily emptying itself. Rather than going back to Queenstown we looked through our handbook and found a garage in Wanaka. They did a much better repair and it now doesn’t drip like it did before. It still is in a very vulnerable place though, We’ll have to be extra careful how we turn off the road from now on or we’ll end up bashing it again.

In Wanaka we couldn’t resist Puzzling World; a big 3D maze and café. 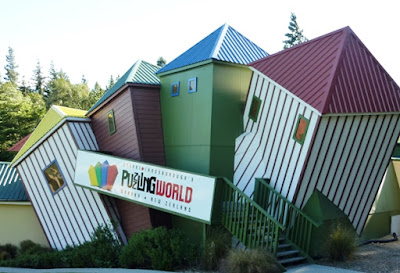 There were dozens of little wooden puzzles on the tables and we had a brilliant time in the maze. The average time for finding all four towers in the right order and getting out again is an hour. With our combined genius we took 45 minutes, and were extremely pleased with ourselves.

We carried on up highway 6 alongside Lake Hewea with the scenery getting more dramatic every mile, the road then crosses a 500m pass back to Lake Wanaka; very dramatic. We stopped at a DOC campsite on the shore of this beautiful lake and were lulled to sleep by the waves washing the driftwood strewn beach.
at January 19, 2011

What a wonderful pictures........
Queenstown To Wanaka