Canterbury Plains to the coast.

We left the Top 10 Camping Ground at about 9am, drove back along Highway 75 to Christchurch, found a big supermarket and a Mc-wifi, and then went back into Maui Campervans to have our table fixed. In the afternoon we drove in the opposite direction towards the Southern Alps and Mount Hutt. One of the many free guides that we’ve picked up since we arrived has a 14 day itinerary that goes right round the south island and covers most of the best bits. We’re going to modify it a bit to end at Picton where we catch the ferry to North Island. We followed Highways 73 and 72 across the Canterbury plains 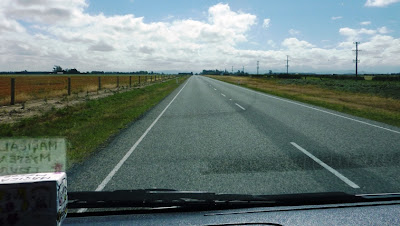 with sheep, cows and venison farms all around us 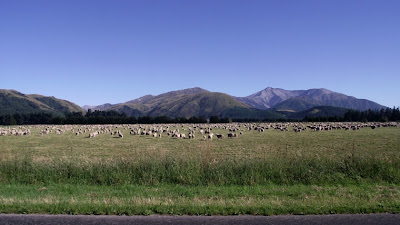 and then over the Rakaia River. When we hired the van they gave us a “Tourism Radio”; a GPS based device that plays through the car audio and gives you information on whichever part of the country you are travelling through. As we approached the bridge, it told us about a walk along the Rakaia River Gorge, so we pulled into the picnic area and went to stretch our legs. Like all the other rivers we’ve seen, the Rakaia is nowhere near as big as it is during the spring melt, but even in its reduced summer state it’s still quite formidable, and due to the clay that it has brought down from the mountains looks like very thin grey paint. 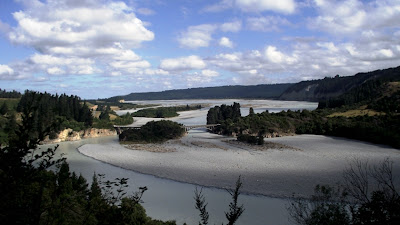 We walked along the path for an hour or so before driving on to Methven for the night. Methven is best known as a skiing base in the winter, at this time of the year it’s very quiet. We parked in a side street not far from the public loo and had a very peaceful night.

We left Methven and carried on along Scenic Route 72 towards Geraldine. At Mt Somers, the Bingy-Bongy Woman (as we’ve named the voice of Tourism Radio,) told us that there was a turning to Clearwater Lake. Not wanting to let her down we followed it and it took us about 20kms up an unsealed road into the mountains. At the end there was, sure enough, Camp and Clearwater Lakes, and a sort of shanty town made up of holiday homes. We had a walk along the shore, watching the waterskiing, and looking at the amazing scenery.

If we’d carried on up the track we would have got to Mt Potts, the film location of Edoras, the fortress city of the Rohan people, but we came back down and carried on into Geraldine where we had lunch.

We spent the afternoon in Timaru on the east coast, paddling in the Pacific 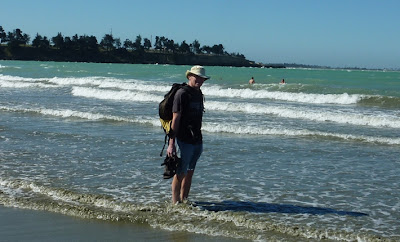 and with a happy dose of serendipity, watched the final concert of the 100th Caroline Bay Carnival. 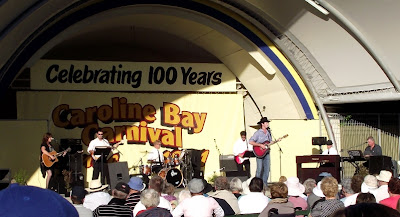 Not wanting to stay in the town for the night, we headed out on Highway 8. Ann-Marie found a little town on the map called Pleasant Point. The sign said “The Name Says It All” so we pulled in for the night.
at January 11, 2011