***We can't get onto our E-mail at the moment. We are trying to resolve it and will be back on line ASAP.***

After breakfast we had a walk around Pleasant Point, which didn’t take long, but did include a visit to Legends Café and a taste of their “World Famous Custard Square” Yum! 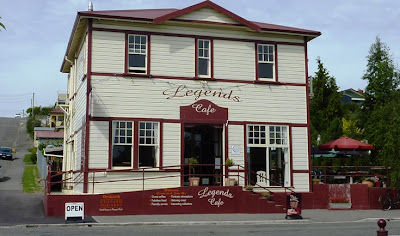 We carried on along Highway 8 to Lake Tekapo, with the scenery getting more dramatic with every mile. The lake is a beautiful light turquoise colour from powdered rock washed down from the glacier. At the bottom end is the Church Of The Good Shepherd, which is a popular place for Kiwis to get married. 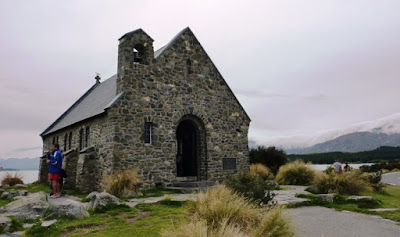 It was a bit warm in the afternoon, so we had a siesta and about 4.30 began the climb up Mt John. At the top is the Earth and Sky Observatory, the Astro Café and the most amazing views out over Mt Cook and the Southern Alps. 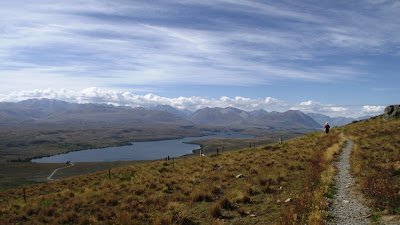 The café shut at 6 and we were just in time to get a Flat White (NZ for Very Frothy Coffee). We came back down the long way along the lake shore.
Starting with Lake Tekapo, there are 8 hydro plants in this part of NZ, all linked together by man-made canals.
On its trip from the glaciers to the sea each drop of water is used to make power 8 times. We followed the hydro canal to the next lake on the power chain, Lake Pukaki, and stopped at the information center car park for the night.
From here there is a perfect view straight up the lake to Mt Cook, but when we arrived - just before dusk - it was covered in low cloud. It was still hidden in the morning but before we pulled out the summit appeared above the cloud layers. 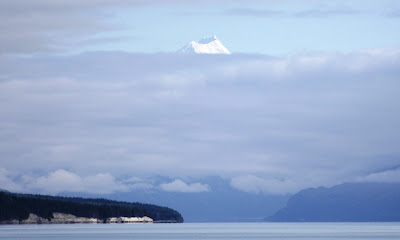 We had to find a doctor today. Dave has been trying to pretend that he hasn’t got a tooth abscess for a couple of days; he now looks like he’s hiding a lollypop and wincing a lot. Our first stop was the Medical Centre at Twizel, but they didn’t have an appointment till 4.30, and advised us to find somewhere in Oamaru as we were going that way. We stuffed Hamster-boy full of pain-killers and set off down the beautiful Waitaki valley. 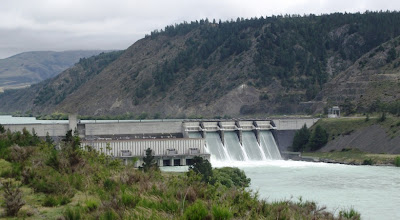 In Oamaru we found Dr Woods, the duty MD for visitors, who prescribed some penicillin. Hopefully that’ll sort him out. We spent the rest of the afternoon walking through town and trying to get into our Hotmail account in McWifi. Windows Live doesn’t want to play at the moment, so our only contact with the outside world is through Facebook. Grrrr.

Just round the corner from Oamaru harbour is a Blue Penguin colony; they come home from the sea at dusk so we found a suitable night stop, then drove up to a lookout point for tea and back down again at 9pm when the viewing centre opened. It was very well organised; there’s a grandstand looking out over the beach, we were told all about their habits and habitat, then just as it was getting dark, waves of little Pingus started swimming ashore and waddling up the beach to their houses in the rocks. It was fascinating to watch; especially as they were there because they chose to be. Nobody trained them, they’re wild animals doing what they want, despite, not because of us.

South along Highway 1. Stopped at Moeraki and looked at the boulders.

These are massive rock crystals that formed in the mud over millions of years and have been exposed by sea erosion. They look as if they’ve been washed up on the shore, or laid by some pre-historic chicken. We carried on to Shag Point for lunch where we walked out to the headland in the howling wind and watched a colony of Fur Seals basking in the (not very sunny) sunshine. 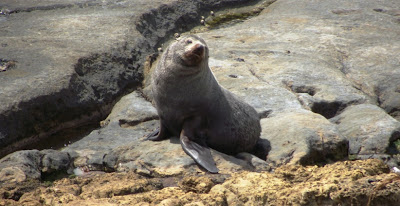 We could have spent all day watching them messing about, but the rest of NZ would have got jealous so we carried on.

At Dunedin we had a washout and then drove out the long and winding road to the end of the Otago Peninsula. Right at the tip is the Royal Albatross Centre and we wandered round the headland pointing our cameras skywards as big graceful birds circled above us. 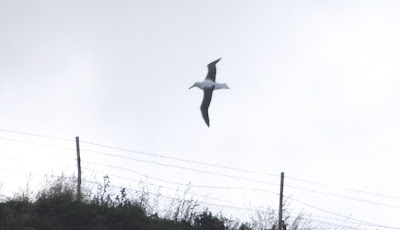 The Centre is a purpose built establishment with lots of information, guided tours, a café and plenty of parking; pretty much the norm for NZ, they do take their wildlife and their visitors extremely seriously. We have been enormously impressed by how easy it is to be a tourist here. Kiwis are so friendly and you constantly get the feeling that someone has gone to a lot of effort to make you feel welcome everywhere you go. Every little town has well signed public toilets; there are camper-van dump stations all over the place and the road signs are clear and consistent, even on the unsealed minor roads.

There was no camping allowed on the peninsula, (we didn’t expect there would be, it would be full of camper-vans otherwise) so we drove back to Dunedin along the aptly named Highcliff Road.

There was a free car park by the harbour with a public loo so we stopped there for the night. We had a walk into town in the evening, took photos of the railway station, (apparently there’s a law which says you have to) 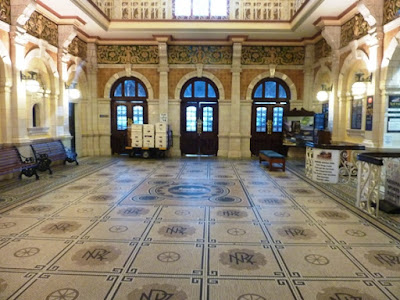 then walked round the Octagon in the centre, before retiring to Kiwi Ken for supper and bed. Dave is responding to the drugs, although he still answers to “Lumpy”. When we got back we discovered that just over the road there was a railway shunting yard with a night shift; it can’t have been that bad though, we didn’t wake up till 9am.
at January 14, 2011