It didn’t half rain last night. We got woken up early in the morning by the wind rocking our little van about and the rain pounding on the roof. Admittedly we were in rather an exposed position, ie, on top of a hill overlooking the Pacific Ocean, but still…

As we were not far from the lighthouse on the most easterly bit of mainland in the world we thought it would be good to go and have a look at it, so we carried on the track for another 6 kms to the end. The lighthouse is at the top of about 500 steps; what a good way to start the day. 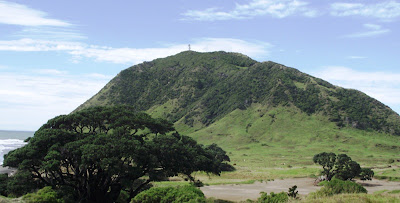 The wind at the top was horrendous; it was a real struggle standing and Ann-Marie had her hat blown off and almost lost it. 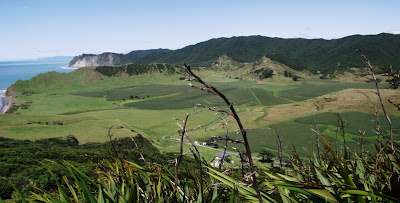 The Pacific Highway along the top of East Cape and round the Bay of Plenty is full of interesting stuff. It wasn’t the brightest of days, but a howling on-shore wind, lots of recent rainfall and an incoming spring tide made it all very dramatic.

This is an Anglican church at Raukokore.

And driftwood all over the road at Omaio.

This is a Marae; a Mauri meeting house. 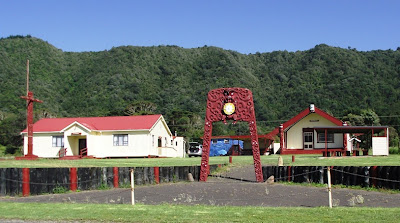 The wood carving is amazing. The East Cape and the Bay of Plenty were where the first Mauri canoes came ashore from Hawaii in the 1300s. Every village along the road has one of these meeting houses and they are all as intricately decorated as this one.

We stopped for elevenses today at a Pacific Coast Macadamia's nut orchard; they sold very nice flat whites and home-made ice cream. Yummm! The gardens round the café were spectacular too and home to some Monarch butterflies. 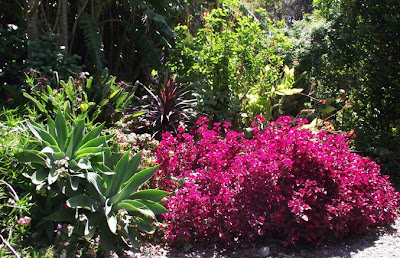 When we crossed the Motu River it was in full flood and going like the clappers. Half way across the bridge we stopped to take a photo and our little Magic Bus that Kate & Anne made for us blew out of the open window and disappeared into the raging torrent! Noooo!

This is our little gang of fellow travellers.

And this is where the bus went. 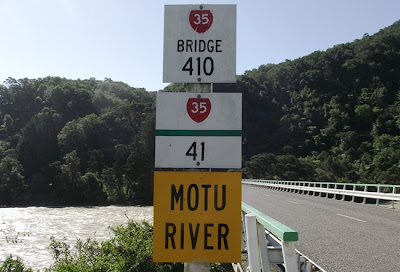 The recent rain hasn’t just swollen the rivers; Fulton-Hogan (NZ’s road mending monopoly) have got their work cut out. 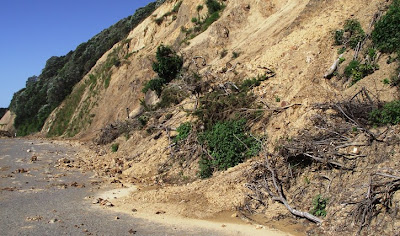 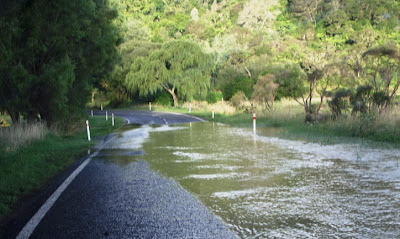 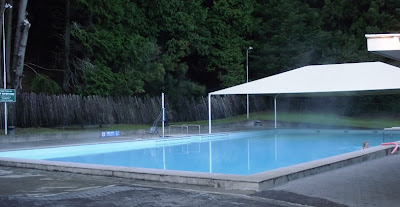 it’s a geo-thermal swimming pool at a constant 38˚C. There is a constant wiff of sulphur, but when you’re swimming in a hot bath you can put up with it. We went to bed clean and wrinkly.
at January 31, 2011