When Start-key and Clutch don't respond, trust your mates.

After leaving Anne’s on Saturday we stopped off near Grantham to say hello to Heather, one of Bourne Borderers who we didn’t see on Boxing Day. Heather gave us a tour round her beautiful 18th century cottage followed by a delicious lunch, then in the afternoon we all went for a walk along the Grantham Canal and had a look at the newly restored Woolsthorpe top lock.

Just after dusk we set of for Spalding and Carole & Alastair’s for the night. Their daughter, son and daughter-in-law came over for the evening to celebrate Alastair’s birthday and we had a fabulous evening. Chinese take-away and birthday cake – what’s not to like?

In the morning we were on the last leg, we’d planned to go to see Ann-Marie’s Godchildren then on to Frankie’s and finally down to Auntie Wendy’s where we would be leaving Ken while we’re ‘Down Under’. We said goodbye to Carole and Alastair, had hugs and kisses, turned the key and Ken went ”Whu-Whu………Whu………….Wh…...” So we put him on charge and went back in for another cup of tea. Half an hour later we had another go; this time he fired up, we all cheered, said goodbye again and had more hugs and kisses. Dave went to back out of the drive, put his foot on the clutch, and the peddle fell off its spindle.

Within an hour we’d rearranged the next two days and Alastair had phoned a very nice auto engineer called Steve. By 2pm Dave had removed the sheered spindle, Steve had turned up for lunch and Ann-Marie’s dad was on his way to pick us up. Ken will be spending a peaceful three months next to Carole & Alastair’s VW motorhome, Steve’s going to weld the peddle back onto its spindle, Alastair’s going to get a new battery for us, we’re staying at Ann-Marie’s mum and dad’s till Tuesday and everything has, once again, turned out fine. Thank you for everything guys. 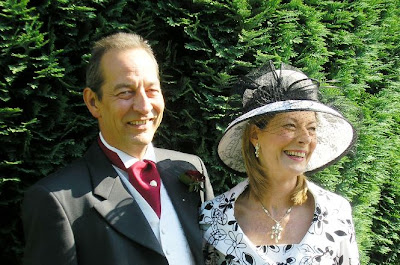 Poor Ken. He got so close. After nearly 6000 miles trundling around Europe, after struggling up and down mountains on little roads that weren’t on the map, after 7 border crossings and two ferry sailings he finally went twang on the final morning of his trip.

When we think of all the alternatives, breaking down on your best mates’ drive is about as good as it gets. Anything else makes our blood run cold.

We are so, so lucky. We have this fantastic network of friends and family who consistently bend over backwards to help us and we will never forget what they’ve done. No matter how listless we get, our list of friends will be one that we will keep forever.
at January 03, 2011

Well done Ken - and well done your mates too.