Fun in the Jungle

We’d left ourselves plenty of time to have a look round Noosa on Friday morning, but a tropical downpour started around 5am and by the time we got up there was a river running under the van and it didn’t look like letting up all day. It was still 28˚ though, when we had to go outside it was quite refreshing but walking about for any length of time was impossible. We packed up and carried on driving north; the countryside getting greener and denser with every kilometre. When we got to Maryborough it had stopped raining, so we parked up and went for a look round the town that was once destined to be the capital of Queensland before the title fell to Brisbane. The streets are lined with traditional Australian houses dating back to the pioneer days and the centre of the city has lots of grand public buildings that have been beautifully preserved. Although it has a fascinating social history and a wealth of interesting architecture, Maryborough is most famous as the birthplace of P.L. Travers; the creator of Mary Poppins. There is a statue of the nanny with her umbrella and carpet bag outside the author’s house. 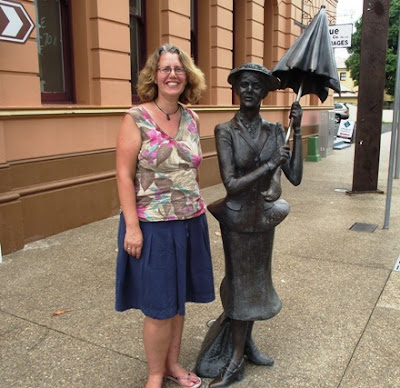 Mary is on the right.
In Queen’s Park by the river there is the most enormous fig tree, 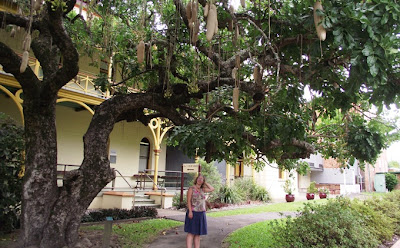 Our final destination for the day, and where we will be for the next few days, was Hervey Bay. Most well known as the ferry port for trips to Frazer Island, this is where Dave’s cousin Mary lives with Steve and their children, Jasmin, Zach and Teagan. The whole family left Adelaide 4 years ago in a converted bus, with the intention of travelling round Oz for a year. After a few months they realised that a year was nowhere near enough, so shortened their sights to Cairns. When they got to Hervey Bay they liked it so much they stopped and have been here ever since. We can understand why; we’d stop here too. They have a the most beautiful house with a fabulous wrap-around first floor veranda and an amazing garden with huge palms and mimosa trees surrounding the lush lawn. 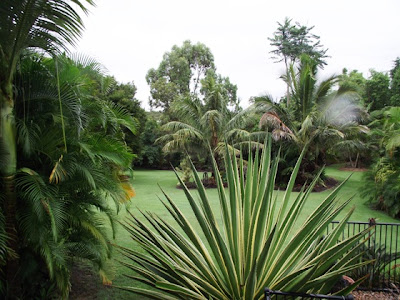 In typical Aussie style they made us feel welcome and at home the minute we arrived and we spent the evening looking out over the bush with a fabulous meal, some terrific home brew and, inevitably, a very competitive game of Skip-Bo.
at March 08, 2011