On Friday morning we set off away from the coast, following the Western Highway to Bathurst where two more of Dave’s cousins and their families live. As it traces the path of the railway that opened up the west side of the Great Divide, the road snakes through the Blue Mountains, so called because of the blue haze from the gum trees that hangs over them. We stopped at Wentworth Falls, 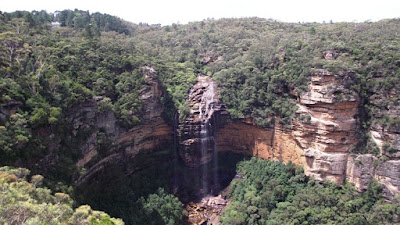 Looking out over the endless and virtually untouched forest stretching out before us we found ourselves in another of those reality re-evaluating moments. Everything about Australia is so far removed from our reference points that nothing prepares us for the next horizon, the next beach, the next mountain. We’re amazed by all of it and happily gaze about in wide eyed wonder. Aussies must think we’re barking. We’ve been seen lying on our backs looking at bats, jumping around on squeaky sand and licking salt off mangrove leaves. We’re like a couple of kids in a giant sweet shop.

We got to Bathurst and found Bernadette and Pete’s lovely traditional house. Pete took us for a tour of the town; the original railway cottages, the big wide streets and the race-track. Yes, race-track. Most of the time it is a public highway, there are even driveways going off it to private houses, but it is a full blown, grown up race track, complete with tyre walls, pits, paddocks and a Dunlop bridge. That evening we went for a drink and met Alice and her daughters Anna & Rosie, then we all went back to Bernie’s for a lovely meal on the veranda.

On Saturday Pete drove us out to a little known conservation park in the Blue Mountain foothills called Blackfellows Hands. Under the shelter of a massive overhanging rock there are cave paintings made thousands of years ago by Aboriginal people. 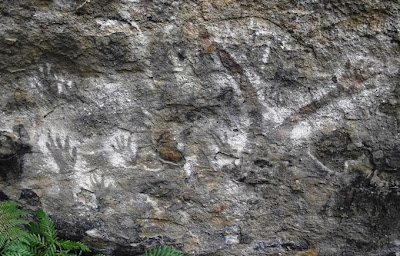 A very quiet and peaceful place to be. We all went round to Alice’s house for another delicious meal that evening. It has been really good to meet all these wonderful people. 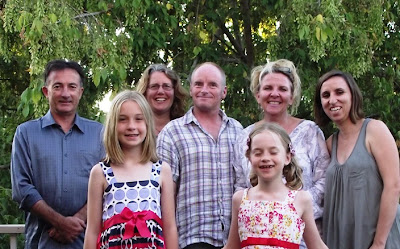 Back row; Pete, Ann-Marie, Dave, Bernie, Alice
Front row; Anna and Birthday Girl Rosie
Dave’s sister Kate came over here about 20 years ago and met most of them too; we don’t know how she managed it without the electronic gadgets we have today. We’ve needed constant Facebook, email & text messaging just to exist. Now we’ve put faces to all the names we must make sure that we keep in contact.

We crossed back over the Blue Mountains on Sunday, this time we took the road less travelled, the Bells Line of Road, to the north of the main highway. It’s a bit longer and bit twistier; all good stuff, but the best bit is that it goes past the Zig Zag Railway. Trains leave three times a day; 11.00, 13.00 and 15.00. We turned up at 10.55. This sort of good fortune is becoming scary. The rules of Karma say that to have the sort of luck that we seem to do, both of us must have been Mother Theresa for a while. 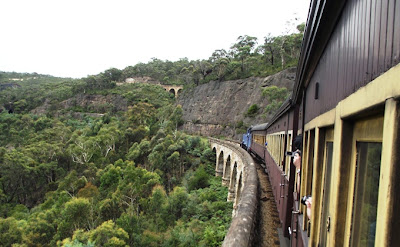 It was a smashing trip; coming back up was even better than going down; the engine really has its work cut out climbing the steep incline. It’s good to see steam power in action with no holds barred. 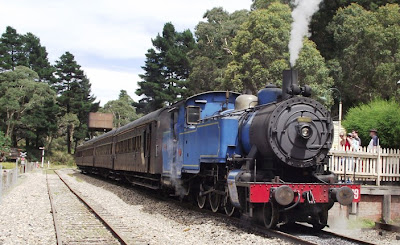 When we got back to Sydney, we went  out with David, Liz and Chris to the naval base at Camp Cove where Rosalie and Mike live. They have the best view in Sydney, looking out over the harbour and the city from their veranda.

Mike manned the Barbie and served up a fantastic meal including kangaroo steaks, which were delicious. They have a couple of wild Kookaburras that come and perch on the balustrade and will eat out of your hand. 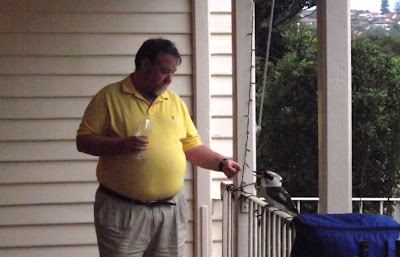 We watched a perfect sunset 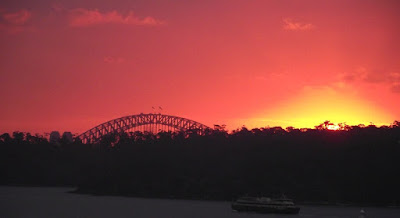 then, as it got dark the city lights began to shine. 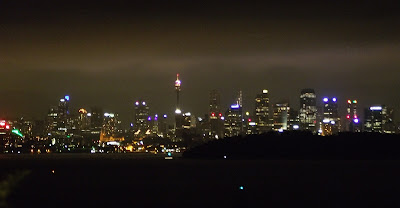 One day the navy will post Mike somewhere else and they’ll have to leave this little chunk of paradise. We think they’ll have to prise Rosalie’s hands off the railings for that to happen.