On Sunday, having abandoned our plans to go to Cairns and our hopes of snorkelling on the reef, changed our flights and travelled 650kms south to Gladstone, we went into the information centre and were greeted by a very enthusiastic lady who thrust lots of literature into our hands about the Town of 1770 and Agnes Water. We were especially interested in a trip out to Lady Musgrave Island, maybe we could get out to the reef after all. Ann-Marie’s family had given us some money for Christmas and spending it on a Great Barrier Reef trip had been something we’d been really looking forward to, so we phoned up and booked two seats for Monday morning.
We arrived in Agnes Water in the dark in the rain and were up and parked at the 1770 wharf by 7am. It was still raining with an on-shore 20 – 30 knot wind; we weren’t sure they were going to sail but the captain and crew didn’t look at all flustered and cheerfully welcomed us aboard.
The Spirit of 1770 is a very capable high speed cat and skipper Dave did a sterling job avoiding the worst of the swells, but even so, the hour-and-a-half trip out to the island was about as rough as it gets. Over half the passengers got sea-sick and the remainder were not looking that good when we finally sailed into the lagoon.
From that moment on though, it became one of the most memorable days either of us will ever have. The water inside the lagoon is a crystal clear turquoise and, compared to the swell outside, flat and calm.
With the cat moored to the pontoon,

and tea and cake dished out to anyone feeling up to it, skipper Dave gave the residents some free food. 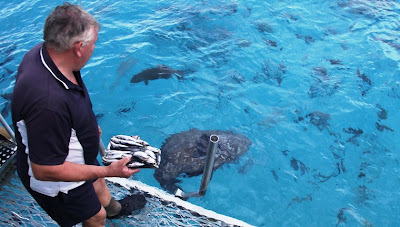 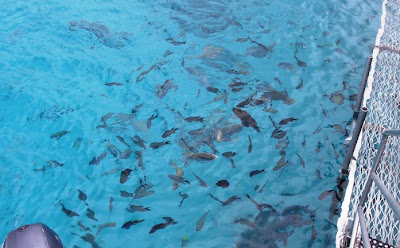 The pontoon has an underwater viewing area, so we got a taste of things to come.

(We bought a little underwater 35mm camera, so when we get the pictures back from that we’ll add some more) From the pontoon we went in a glass bottomed boat to the coral shore where we were given a guided walk round the island. 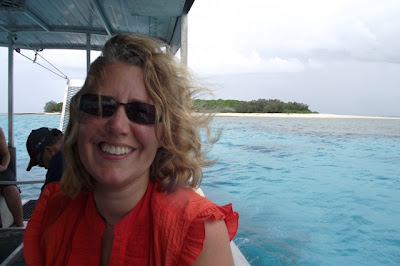 We were told what the trees were and all about the resident birds. We got to hold a sea cucumber, which is soft and warm, 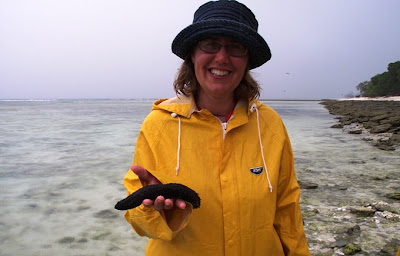 and we saw some black finned reef sharks rounding up their dinner of bait fish. Then an amazing thing happened; a true once-in-a-lifetime moment. It was pouring with warm tropical rain and our little group was walking back along the beach to where the glass bottomed boat was moored. Suddenly someone saw a baby turtle heading for the sea. Then another. Then there were hundreds, all going like billy-o to the water 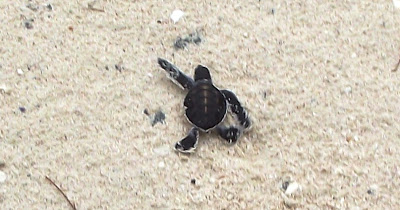 They usually emerge at night but it was overcast and raining so they must have thought it was time to go. Three nests were erupting like little wriggling volcanoes in the sand, spilling out tiny green turtles, all climbing over each other. We spent a delirious half hour watching their frantic race to the sea and scaring off the seagulls who also thought it was fabulous, but for entirely different reasons. Because it was raining so hard we didn’t get much on camera, but we have got a few seconds video that we’ll put on you-tube when we get a fast enough connection. We were willing each one of them on, wishing them well when they took their first flap and glided off onto the sea; bobbing their heads up for breath every few seconds. It was if they'd been waiting for an audience; half an hour either way and we wouldn't have seen them. It is incredible how something so small and new can be so determined and know not only which way to go, but how to climb over things and how to swim and breath underwater.

When the last one was safely out to sea we went back to the boat for a delicious lunch after which we got fitted out with fins, masks and snorkels and took to the water ourselves. We were both completely blown away by everything. Coral, clams, turtles, fish – so many fish! And so big! Ann-Marie has never been in tropical water before, Dave did a bit of reef snorkelling in Belize 25 years ago, but it wasn’t a patch on this. Hopefully the little camera will show some of what we saw; the highlight for both of us must be the giant green turtles. They swam alongside us before gliding down into the depths. After two sessions and several cups of hot chocolate it was time to return to the mainland. The trip back was a lot quicker and a lot calmer; going with the waves instead of trying to climb them, and we got back to Town of 1770 with big grins despite everything we were wearing being wet through.

Why serendipitous? Well, before we sailed, we switched on the radio; the first thing we heard was that the road from Townsville to Cairns had reopened. Some official was babbling on about how they hadn’t been scare-mongering and the water had receded much quicker than they’d expected, blah, blah. If we’d gone to Townsville from Bowen instead of turning round we would have got through. We would have gone on a reef trip from Cairns and thought we were luckiest people on earth.

But we wouldn’t have seen those little baby turtles scurrying down that beach, and for that, we are the luckiest people on earth.
at March 15, 2011