Final days in the east.

We’ve only got 2 nights left in this little van. We’ve been quite impressed at how much we haven’t wanted to kill each other over the last 8 months. Before we stopped work, Dave was on nights and Ann-Marie was on days and we only saw each other at weekends. It was a major concern when we embarked on this trip that being together 24/7 was going to put too much strain on our relationship. We think we’ve done OK. We still love each other, and if we’ve learned anything, it’s been how to get over disagreements and move on. There really is no room for frosty silences when you’re living in something that’s smaller than your average bathroom. A 57’ long narrow-boat with 3 or 4 rooms is going to seem palatial compared to this. Heck, Ken is going to seem palatial compared to this!

We are seriously looking at boats on the web now. There are quite a few in our budget range that we’re interested in and we’ve made a few enquiries and asked to go and see a couple when we get back. We think that taking on something that needs a bit of work would be the best way to go, that way it won’t be too hard to make small changes to suit ourselves. They’re all a bit spread out though, so far we’re looking in Yorkshire, Oxford, Herts, Lancs and Staffordshire, so Ken’s going to have a bit of a trek. (We have had an idea about putting the Acadiane back on the road to do the boat hunting, less fuel and a bit quicker.) 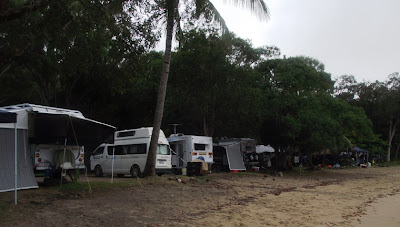 lovely hot showers and a view out over the bay through the back door in the morning. 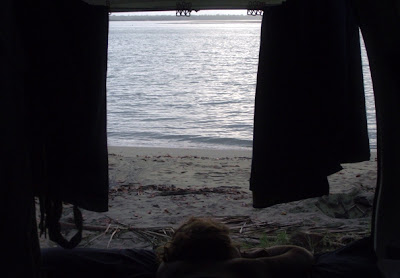 When we left we went to Bundaberg where we took on the might of the Ausie health care system. Dave’s tooth abscess was threatening a re-appearance so we wanted to get it sorted before it went all lumpy again. We’ll have to get him registered with a dentist when we get back. By the time we’d got a temporary Medicare card, seen a doctor and got some antibiotics it was 5pm. We were not that far from Hervey Bay, and it would have been rude to go past without saying hello, so we sent Mary a text and were soon parked for the night outside the house with the fabulous veranda.

After a lovely evening with Mary and the kids and a peaceful night, we spent Wednesday travelling slowly south to a rest stop just up the road from Australia Zoo. We thought a visit there would be a good way to spend our last day in Queensland before we say goodbye to the east coast and fly into the hot, red bit in the middle.
at March 18, 2011