Wednesday was a relaxed affair; we did a bit of souvenir shopping in Alice, had a picnic at the Telegraph Station, and then went back to Ann’s in the afternoon.
Thursday, Friday and Saturday on the other hand, were busy, busy, busy. Part of our planned itinerary from Trailfinders was a three day tour to Ayres Rock Resort, visiting Uluru (Ayres Rock), Kata Tjuta (the Olgas), and Kings Canyon.
The coach picked us up at 7.30 am in Alice Springs and set off south along the Stuart Highway.

It goes on a bit, 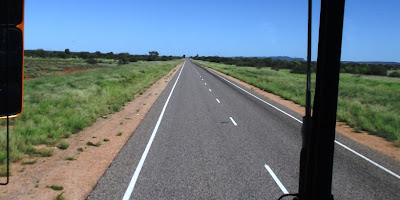 We stopped for half an hour at a camel farm and had our first taste of camel burger, they also have some rescued wildlife there, convalescing prior to their release, including an emu, a dingo and some roos. 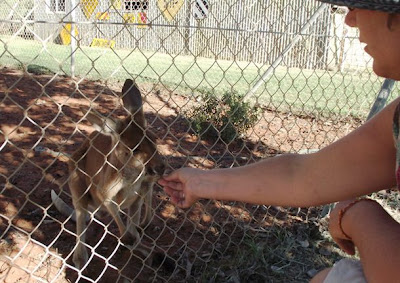 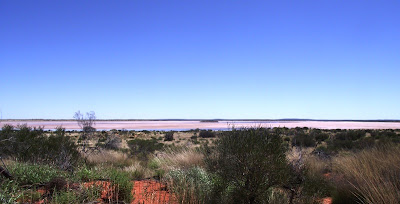 and Mount Connor to the east. 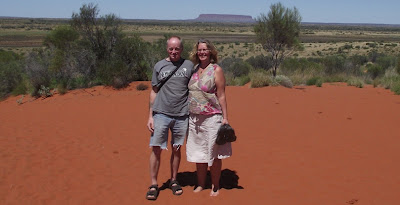 The sand was so hot it was hard to keep still. Mount Connor is called “Fooluru” by the tour guides; there are stories of people getting this far, taking a picture and then going home again, thinking they’ve seen Uluru.

Ayres Rock Resort consists of several hotels, apartments, backpack hostels and a campground, as well as accommodation for around a thousand staff. It is a town in its own right with a shopping precinct, bars and restaurants. Despite this the buildings are very low key and the only thing you see as you approach is the communication tower. This is our hotel with the Rock in the background. 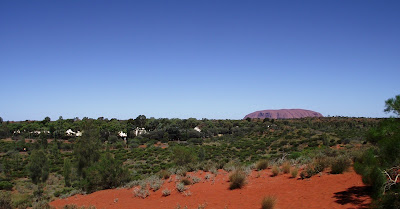 After we’d settled into our room, we were taken out to Kata Tjuta and went for a guided walk through the Valley of the Winds. Kata Tjuta was formed by the same phenomenon that produced Uluru, they differ by the former being composed of much coarser conglomerate material rather than finer sandstone, and they were tilted to a lesser extent when tectonic plate movement pushed them out of the earth’s crust. This has resulted in erosion wearing them away much faster, leaving 32 domes and lots of explorable valleys behind. 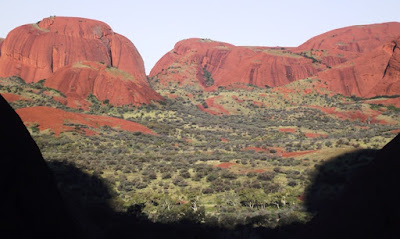 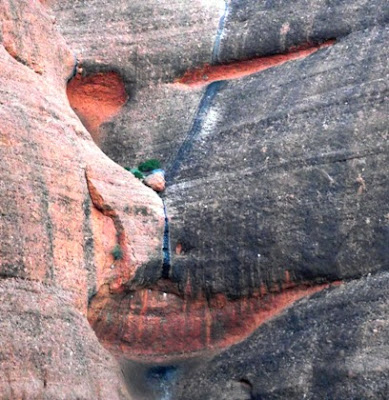 After the walk we were treated to sparkling wine and nibbles while we watched the sun set on Kata Tjuta.

As darkness fell we were taken out into the bush for a steak, kangaroo and sausage barbeque. When we’d all finished eating, we were told to shut our eyes, and on a count of three to open them again. All the lights had been turned out and the sky was glowing with more stars than we’d ever seen. With a total lack of light pollution and a crystal clear sky we had a fab half hour star gazing.

At silly o-clock in the morning on Friday we were back on the coach and out to watch the sun rise on Uluru.

This was followed by a cultural walk around the base, where we learnt about some of the stories the Ananyu people told their children, and how they would have used the caves and waterholes. 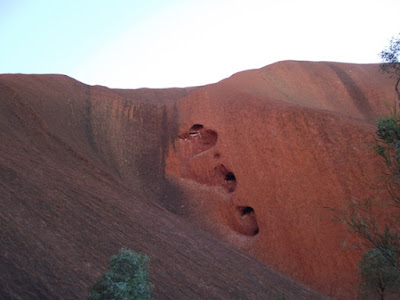 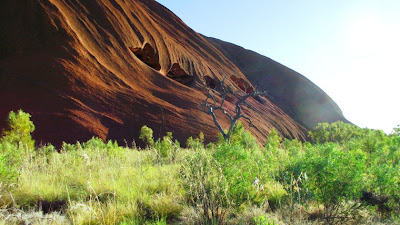 Anthropologists now believe that Aboriginal people have been in Australia for anything up to 60,000 years. They were completely at one with the environment they lived in. Europeans turned up 200 years ago and thought they could improve their lifestyle with western education and diet. The white man’s white flour, white sugar and white toilets very nearly destroyed a race of people that were around before the last ice age. Modern Australians from all backgrounds are now having to deal with the repercussions of European settlement; a monumental task, and one which is going to take time and tolerance to achieve. However, this is a Great Nation, in every sense, and nothing is beyond them.
at March 30, 2011