After leaving Burrill Lake we stopped first at a little place called Vincentia, 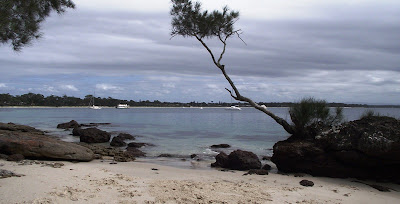 then at Huskisson Bay,

where we went for a walk along the beach and played chicken with some seriously big waves. After that we drove up to Kiama, which is a lovely little town with a famous blow hole on the headland. It’s best seen at high tide with a strong on-shore wind. You know us….Bingo! 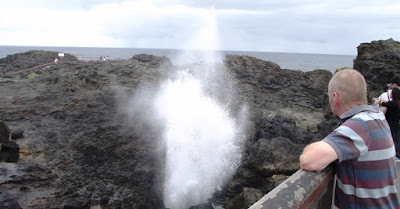 After a meat pie and a cup of tea in the town we headed off to Sydney’s outskirts to Dave’s Uncle David’s house. Ann-Marie’s spot-on navigating landed us outside their door with no problems, and we had three wonderful days with David, Liz, Chris and Libby, 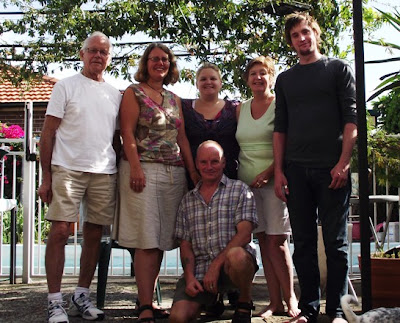 being shown around the big city and feeling really special.
On Wednesday David drove us into the harbour area and we parked underground near the wharves. As we emerged at street level we heard a very loud ships horn. We’d heard it before – the last time was in Gibraltar. 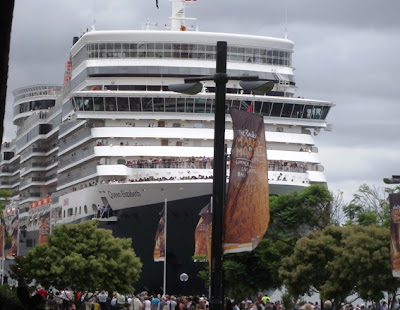 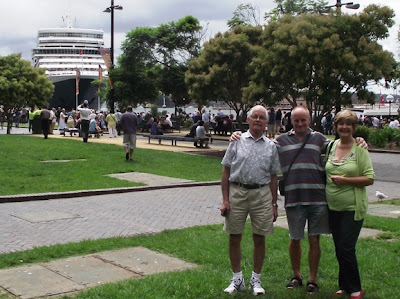 We strolled round the harbour to berth No. 2 where we got on the island shuttle service. It was doing special sight-seeing tours of the harbour, past the Opera House and the big ships.

We got up close to the Queen Mary and felt very privileged; as we were taking photos, some rich people waved their jewellery at us.

Afterwards we had lunch just outside the Opera House.

On Thursday we were chauffeured to Bondi for lunch in a café overlooking the beach. 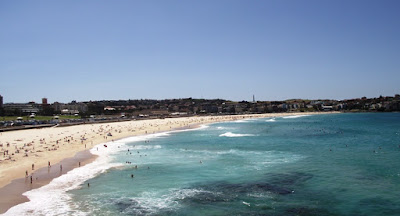 We went for a swim, or whatever being bashed about by the most famous waves in the world is called, and after about 15 minutes, came out fully aware of what all the fuss is about. It was the most powerful surf either of us had ever been in.

David drove us to some more of the other beaches round Sydney and he and Liz pointed out lots of places of interest in this beautiful, vibrant city. In the evening Dave’s cousin Rosalie came round and joined us for dinner, after which we got out the family tree to compare notes and looked through lots of old family photos. A perfect end to a perfect day. It’s uncanny; even though David left for Australia before Dave’s first birthday, and the two of them haven’t had any contact since, there’s still an inescapable bond between them. We felt so comfortable with David and Liz, it’s been like coming home. 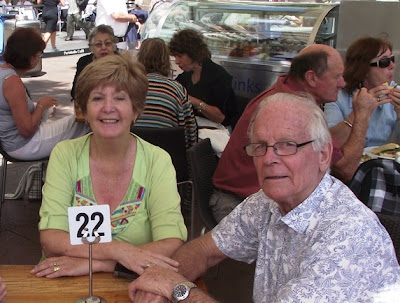