Leaving Portugal, not with a whisper!

We woke up to a clear sunny morning in Praia de Mira on Thursday and took the A17 north towards Porto. It was very different to the A17 that goes past our old house and quite a bit longer. After stopping for lunch in Porto we went north-east to Braga, then parallel with the Spanish border up the fantastic N103 towards Chaves. What a brilliant road; 125kms of mountains, lakes and forests. 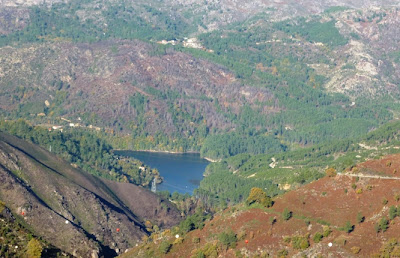 We stopped for the night in a lay-by on one of the loops. There was a mountain spring where we filled up the water tanks and we woke up on Friday morning to find frost on the ground. The road twists and climbs as it follows the Ria Cávado valley past three hydro dams, finally crossing the river just below the fourth and biggest; Baragem do Alto Rabagao. There was a road across the top of the dam so we drove out and had a look. 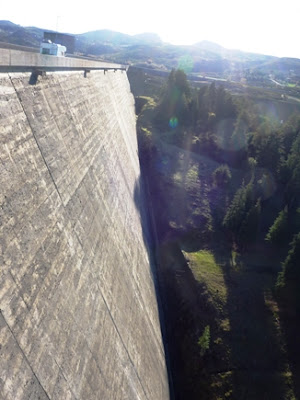 Just before Chaves it climbs up and over a pass then drops down with fabulous views over the valley floor. It was the last big road we drove in Portugal although we were sad to leave this beautiful, happy and familiar feeling country we couldn’t think of a better way to do it. 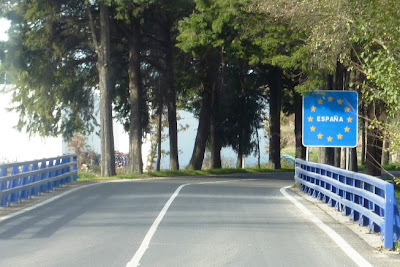 From Chaves we went across the Spanish border to Verin then east along 160kms of the A52. Although this is a fast, modern motorway and nowhere near a challenging to drive on as the roads of the past couple of days, the views are fantastic. 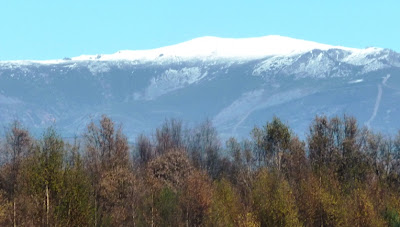 On our left was the Sierra de la Cabera with snow on the 2000m+ peaks, while on our right the lakes and dams of the Rio Tera backed by the Sierra de la Culebra. The motorway itself goes from 500m to over 1200m and has some spectacular bridges. We cut off a corner below León and stopped at Valencia de Don Juan. There was a camp site on the map but we failed to find it, and it would have been shut anyway, so we spent the night in another car park.

There was a splendid castle to look at and a very big river; Rio Elsa, which has a Canal! It’s a flood defence, not a navigation, but a man made waterway all the same. At 780m above sea-level we weren’t surprised that it was a bit nippy, and when we woke up on Saturday morning anyone who’s reading this in November in England will be pleased to hear it was 2˚C. Inside the van! 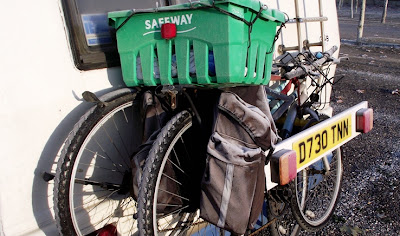 The beginning of Saturday’s drive could be described as mundane; we were on a high plateau on the A231 for 160kms between León and Burgos and it was a bit flat. But we’re scenery freaks and we can always find something to look at; big blue skies with the snow-capped Cordillera Cantabrica way off to the north kept us happy most of the time. After lunch and after Burgos it got a bit lumpier, and we arrived in Logroño at about 1:30pm. This time we did find the very well signed and very nice looking camp site, but as we’d expected, it was shut. We parked the van just round the corner from the campsite entrance and called it a day. We had a walk along the river and through Logroño in the afternoon; the capital of the Riojca area and a very majestic university city with lots of history. 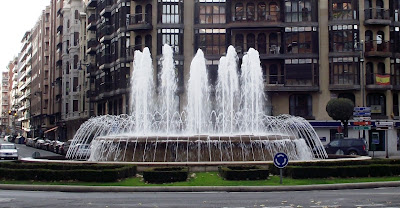 It was like walking round a ghost town; apparently northern Spain is shut from lunch time to 5pm, and then open all evening. We returned after tea to find all the shops full and the whole city thronging with people. It seemed very odd to us but it makes a lot of sense.
at November 29, 2010