It's Sunday. This must be France

We were still heading north-east towards France on Sunday. From Logrono we went to Pamplona, stopping at a campervan Aire de Service, (on the A12 at Junction 18, just in case anyone is ever going that way). Although we'd heard very good things about  Pamploma and had planned to stop for a look, when we got there it was foggy and cold so we hit the ring-road only stopping to get a new gas bottle on the way out. We’ve been on Spanish gas ever since we stayed with Bee & Bill and they had an empty going spare. We changed it for a full one when the little French one we'd hired ran out in Gibralter. We’ve had the heating on in the mountains for a few days so we’ve been getting through gas and, although it wasn’t completely empty, at 12.50€ for a 12.5kg butane bottle we wanted to get a new one before we left Spain. Hopefully it should last us back to the UK and more, we’ll de-hire the French one is Calais.


From Pamplona we turned directly north on the N121 through the mountains and snow. (Yes, snow! Not like it has been in the UK just recently but it was still a shock.) 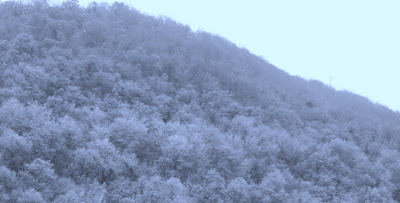 Once we’d gone through the 4km tunnel under the summit at Puerto de Belate the weather improved, the snow disappeared and it was pretty much downhill for 40kms to Irun and the French Border. Shortly after crossing into France we got to St Jean de Luz, which had a campervan parking place right on the side of the main road by the railway station. It wasn’t ideal but we were getting anxious for somewhere to stop; the van is not doing too well with all this upping and downing. There is something wrong with the clutch; it won’t fully disengage most of the time and it’s getting worse. We can cure it temporarily by tightening the adjuster, but that only lasts for so long and we’re running out of adjustment. We’re fairly confident it’ll get us to Jacqui and Al’s, near Toulouse, where we’re stopping again to house-sit while they visit the UK, and Dave is going to have a go at sorting it out. Last time we were there we fitted a new radiator; they’re going to think we only want them for their tool box!

Anyway, after walking round the town and watching some folk-dancing in the square, we spent the evening listening to platform announcements, the TGV going past every hour and un-silenced mopeds. Surprisingly we slept quite well and on Monday morning we went for a walk. We set off in what we thought was, but turned out not to be, the direction of Ascain, a little village in the foothills of the nearest snow-capped peak, near to where a little mountain train leaves for the top. Once we’d re-orientated ourselves and found the village we’d already walked twice as far as we’d intended, but it was very pretty and had a patisserie selling very tasty bread and apple turnovers, yum! We also had a delicious expresso in a bar and apologised to the landlady for interrupting her dinner. 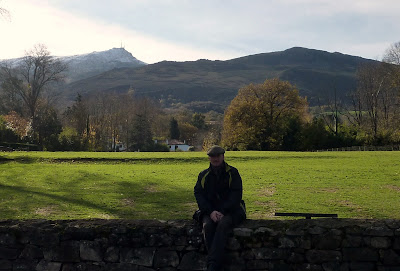 The mountain train was another 3kms further up and we weren’t sure it would be running in the winter so we followed the shorter, flatter road alongside the riverbank back to the van. After lunch, in search of a quieter night we headed out through Bayonne towards Dax, stopping at St Geours de Maremne, just round the corner from a boulangerie. That’s breakfast sorted then! Stopping and starting in the Bayonne rush hour didn’t do the clutch any good but we’re still going, with our fingers crossed.
at November 30, 2010