To Seville, or not to Seville

Well, it had stopped raining by the morning, but the wind was still howling, so rather than being blown off our bikes we walked back along the main drag to the city gates, then into the maze of dead straight but very narrow streets that make up Cadiz proper. Armed with a map from the tourist office, we went wandering. The buildings are all very tall and the plazas seem to pop out from nowhere when you turn a corner. Every now and then you get a glimpse into a beautifully tiled entrance hall, with potted ferns and maybe a table and chair, like an oasis of calm from the bustle in the street. We walked round the outside, where the city walls rise out of the sea, into the medieval quarter, through a botanical garden with two of the biggest trees we’ve ever seen and then back into the middle for a coffee and some delicious tapas 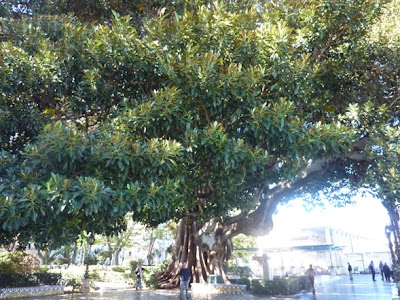 Cadiz is an island with a land bridge to mainland Spain and has a cosy, nautical feel. Like Ely and Truro it’s a grand city in a small space and we loved it.

When we got back to the van, we washed the sand and salt off the windows and, for the first time in a long time turned north. We’ve got to the end of our Michelin atlas of Portugal & Spain; we’re now going back towards the beginning. We’ve come all the way down the Mediterranean coast and it’s time to start working our way back to France up the Atlantic.

We drove up to Jerez de la Frontera, passing the town of Arcos de la Frontera. We came here for a week about 3 years ago, and learnt to sail on the lake. We did think about going back to see it but then we remembered how tricky it was in a little hire car and just waved at it. We stopped at a massive commercial centre to see if we could get some more chemical fluid for our loo; we’ve not seen any since we got into Spain and we don’t have much left. The Spanish equivalent of B&Q, Halfords, Decathalon and an enormous hypermarket don’t have it. Camping shops or caravan dealers would be the obvious place but we haven’t seen one open. Maybe Portugal will be better.

We wanted a full day in Seville so we stopped about 20kms short at Los Palacios and on Wednesday got up bright and early and joined the commuters. Seville is a beautiful city; we could tell that much from driving round it. Sadly driving around it is all we managed. Seville wouldn’t let us in. We did everything right; we checked out the map before we went in and realised that most of the parking would be underground, we picked out the most likely looking above ground car park, figured out the best route to it and went for it. After doubling back a few times, going back to the ring road and having another go, and then discovering that there was another road under the one we were on, we finally got to the entrance. There was no height restriction and it had spaces; so far so good. The trouble started when we got to the barrier; Ann-Marie pushed the button but nothing happened. Dave pushed the button and still, amazingly, nothing happened. No ticket, no upward barrier movement. By this time Dave was all for crashing it, but in the end sanity prevailed. We reversed back into the street and as it was now after eleven and the only parking we had seen up to this point had been nose to tail on-street or, as we’d expected, underground, we raised our hands in defeat and drove off towards Portugal. We really were disappointed; it looked fabulous and it even had a canal. Canal de Alfonso XIII is the canalised section of the Rio Gadalquivir, it’s very wide and it gives Seville a fantastic Thames like river frontage with big pleasure cruisers and floating restaurants. We saw them all from the bridge on the way out.

After passing Huelva, in order to cheer ourselves up we found a little white road that went through a pine forest to a dam. Although the map showed it as being unsurfaced, it was smooth blacktop all the way. There was a picnic area just after we left the main road, then 15kms of forest, then several hundred acres of orange trees near the dam. We reckon most of the water must be for irrigation. The overflow channel is a concrete trough called Canal del Piedras. 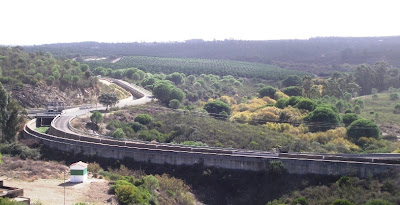 Who says there aren’t any canals in Spain? We found two in one day. Mind you, you couldn’t take a boat down this one most of the time as it’s dry. When it’s not you wouldn’t want to.

We had lunch looking out on orange plantations then set of towards the coast, (where else?) ending up at Isla Cristina, which isn’t really an island but is very lovely.

It’s about the last place on the coast before Portugal and has everything a seaside holiday town should have; a campsite that’s open in November, an estuary full of little fishing boats, an enormous, sandy, shell strewn beach, (we’re going to need a bigger basket) the cleanest streets we’ve seen surrounding a cobbled pedestrian zone and a cycle path network that actually joins it all together. We almost stayed for two nights but Portugal was calling so at about 1pm, after a morning cycling round the town and beachcombing, 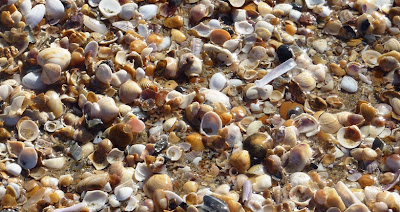 we got back onto the A49 and headed for the Rio Guadiana and the Portuguese border.
at November 12, 2010