After our trip out to see the dolphins we cycled back to the van, stowed all our stuff and pulled out. We’re now heading for Portugal via Cadiz and Seville. We went past the very industrial Algesiras where every garage forecourt has a big sign advertising tickets for Tangiers and other places in North Africa. We met some lovely people in Gibraltar who have a house over there and it sounded fab; we had a hard think about going over for a day or even a week, the reason we didn’t is because we wouldn’t have seen anything in a day, and the van isn’t covered for breakdown outside Europe. The idea still appeals though, maybe we’ll take a fly-drive over there sometime.

We followed the N340 down to Punta Marroqui o de Tarifa, the southernmost point of Spain, 13 miles from Africa. The road is quite high up and the view is amazing. This great big mountain appeared across the sea as we came round the top of a climb and we both said “Well, that’ll be Africa then!” 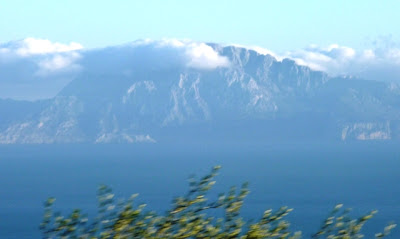 On Sunday morning we left Tarifa and carried on towards Cadiz. Tempted by the symbol on the map for some ruins, we made a detour down a little white road towards the sea. This bit of Spain is a Mecca for wind and kite surfers and it’s not hard to see why. At El Lentiscal and Punta Camarinal the beaches are big and flat and the sand is really fine. The strong prevailing wind has created a massive dune that is gradually swallowing up the forest behind it.

The map showed the road ending at the very impressive roman ruins at the beach, but in fact it carried on up into the mountains, albeit with less tarmac. Of course we followed it to the end, which turned out be three or four kilometres further on and several hundred meters up at a barrier labelled “Military Vehicles Only” in Spanish. Backing down the hill to a usable turning point was a bit awkward but the views from up there were worth it.

We went back to the main road and carried on westward till we got to Vejer where we made another detour to Barbate. Barbate turned out to be slightly run-down and tired looking, but in the town square there was what appeared to be a Moroccan market. All the stall holders had pirate scarves, baggy trousers and pointy slippers and we spent a couple of hours looking round all the unfamiliar and exotic stalls, then watched some belly dancing while eating honey coated cashews and Patatas Frittas. Yum! 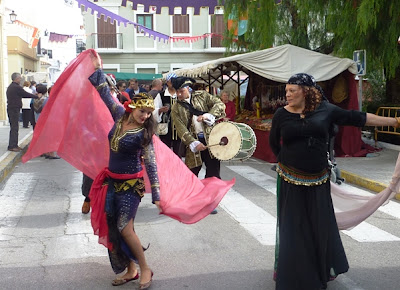 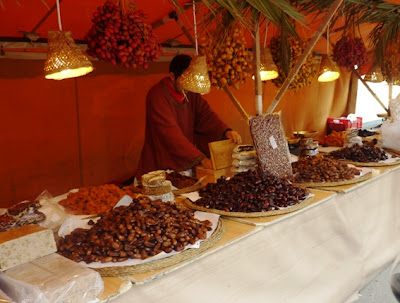 Back in the van we followed some more white roads along the coast, through Conil de la Frontera, before coming across a big sign declaring “Camping. Open”. We followed it even though we didn’t really believe it. Every campsite we’ve seen so far has been shut since October, but as we were out of water and had a bag full of washing it seemed silly not to go and have a look. Camping Roche was not only open, it was also clean, quiet, spacious and had terrific showers.

At five to twelve on Monday morning two clean, happy bunnies pulled out with everything filled, emptied or washed. The weather was a bit rubbish, so we spent a couple of hours on line in San Fernando, just outside Cadiz. At about half past three, just as it started raining, we drove through Cadiz city gates, then round and back out of what looked like a fantastic city, although the cobbled streets played havoc with all our stuff. There didn’t appear to be any car parks; even if we hadn’t been in the van we couldn’t have stopped until we were about a kilometre out, where we’ve parked for the night. We’re alongside Playa de Victoria, which probably looks very nice when there isn’t a storm lashing it. Tomorrow, if the weather improves, we’re going back in on the bikes.
at November 09, 2010