Fish for dinner and Flamingoes afterwards.

It was dull and cloudy on Sunday morning; by the time we got Castro Marim it had started to rain. We did our water filling under an umbrella then drove to Villa Reâl with lights and wipers on. That doesn’t leave a lot of juice for battery charging and we haven’t covered a lot of miles for a while. It’s a good job we swapped most of the lights for LEDs and bought a big 110amp deep cycle leisure battery. We have an isolator switch that separates the interior electrics from the engine battery so we can always start the van, and if we’re careful we can go for about 4 days before we have to drive somewhere. We’ve discovered, by trial and error, that the fridge takes a lot of power on 12v, so we only run it on electricity when we’re plugged in to the mains. The rest of the time it’s on gas; that works well enough to keep the little freezer compartment frozen. We got the LEDs from a little firm called Searolf. Normal LEDs are quite harsh and only operate at or near 12 volts; they sell ones that can tolerate a range of voltages so they don’t flicker when you’re getting low and they won’t blow when you’re charging. And they do them in a range of colours and tones. We’ve got some mellow, halogen-like self adhesive strips that plug together; we had them in our H van and liked them so much that we bought some more for this one. We’ll definitely have some in the boat too. We’re always on the lookout for things to make life easier and we’ve seen several vans down here with solar battery chargers; if we ever find a camping accessory shop we’ll see how much they are.

At Villa Reâl we parked next to the harbour in the rain to find we were in a free wifi zone so we stayed there checking emails and generally messing about on line till the skies cleared, then went for a walk round. The entire town is cobbled; lots of black and white patterns on the pavements, and was built in a grid, rather like a small New York. All the streets are named after members of the Royal Family of the time (Reâl=Royal); the most important in the middle, lesser members further out. We do like to educate our reader. Anyway it’s very pretty and it’s got a lighthouse. 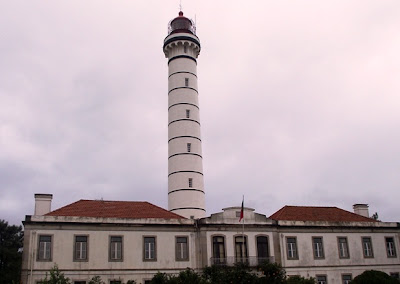 We decided that as we’d been in Portugal for four days and were still only on the other side of the river separating it from Spain it was about time we went further into the country. We got onto the N125 once more and this time managed to get past Tavira before stopping at a nice little spot alongside an estuary near Santa Luzia. There was a pontoon bridge onto the Ilha de Tavira which we walked over then followed the path to the beach. 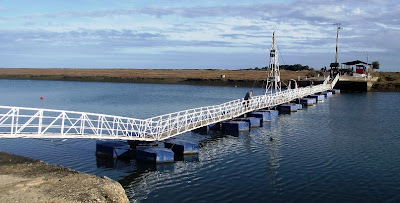 All the sandbank islands along this bit of the Algarve are part of the Parque Natural da Ria Formosa, which covers a vast area of wetland and tidal marshes. It’s very well looked after; there has been a lot of work done to re-establish the dunes and there are flora and fauna information plaques everywhere. With their help, we were able to identify egrets, redshanks and other waders, as well as an endless variety of terns and gulls. Apparently chameleons are native to this part of the world; we don’t know if we saw one or not. Needless to say the beaches are beautiful, and at this time of year, almost deserted.

In the evening we had a walk into Santa Luzia; a small fishing village with a recently, and very artistically re-vamped sea-front. Pictured in the cobbles are shells, crabs and fish as well as abstract patterns and a lot of the houses and apartments are covered on the outside in ornate glazed tiles. 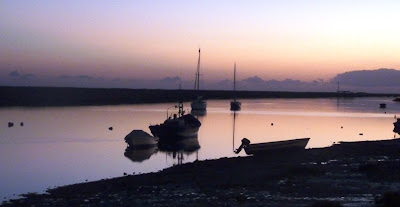 On Monday we cycled through Santa Luzia and on through the middle of some serious road-works to Tavira. We were thoroughly taken with this place; we left the bikes in the middle of a large pedestrian area by the river, surrounded by pavement cafes, shops and a park with a band stand. At the top of the hill in the middle of the town, next to the castle ruins, there is a water tower which houses a Camera Obscura. This is one man’s obsession come to life; he’s constructed it himself from bits he’s collected over the years, and for 3.50€ you get to see the whole town laid out before you on a big dish, while he gives you a commentary and points out places of interest. Fantastic!

There were no end of pavement cafes along the river front and we eventually picked one for lunch. Sitting in the sunshine with the fishing boats tied up to the quay on the other side of the road, Ann-Marie had the biggest tuna steak we’d ever seen and Dave had a delicious sea bass. 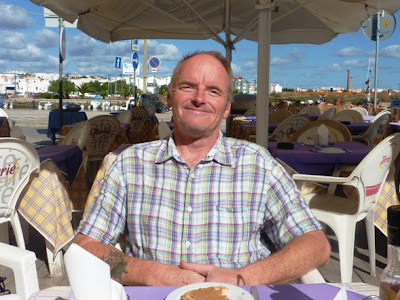 In the afternoon we cycled out through the salt beds. Sea salt is a big industry in Tavira, there are mountains of it all over the place, but that wasn’t what we were looking for. After a couple of kms we spotted what we had come in search of. Flamingos. A big flock at the other end of a salt bed.

We left the bikes by the road and quietly walked towards them. We got quite close before they gracefully took off and landed in the next bed. We took hundreds of photos and Ann-Marie got this amazing shot. 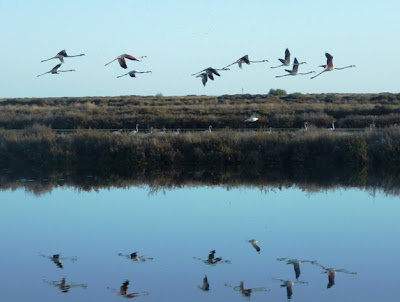