We’d seen pictures of Silvés on post cards and thought it might be somewhere nice to visit, but it still managed to surprise us. It wasn’t by the sea and didn’t look anything special on the map, but it had lots of steep, limestone cobbled streets leading from a very fine castle down to a medieval stone bridge over the river Arade. (The same river the dams were on yesterday.)

Along the riverbank there was a beautiful modern plaza with fountains and statues, then pavement cafes and gift shops.

Further on was the municipal swimming pool, with a wide landscaped area around its tennis courts and car parks complete with outdoor gym equipment and trim trails. The town itself was just big enough to be interesting and explorable, with lots of little shops and old buildings. We found a lovely place selling cork products; from simple tablemats to ornaments and clothing. A waistcoat and tie made from cork looked fabulous and felt like calfskin. There were several pairs of storks nesting on the top of various buildings including two very much photographed ones on this chimney. 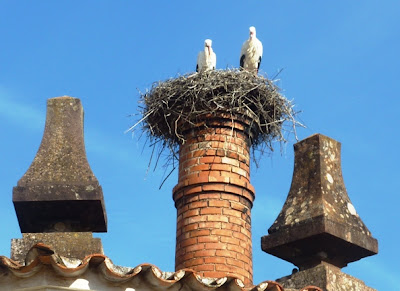 Altogether we thought Silvés was fabulous and we ended up stopping for two nights; if you’re ever down here and fancy a day away from the beach then we thoroughly recommend it.

On Friday we promised ourselves a campsite for the night. We drove in and out of Portimâo, which was very big and full of hotels, then on to Alvor, although we couldn’t tell the difference. There was a campsite on the way out of Alvor but it didn’t light our candle so we went on to Lagos. Just after lunch time we found a quite pleasant and not too pricey place right outside Lagos city walls called, rather grandly, Parque de Campismo da Trindade.
We booked in, put the washing in the machine and went for a walk into the town. Because we’ve seen Lagos on airport destination boards we thought it was going to be a bit on the big urban-sprawl side of things, and there is some of that. The old town however is still very much alive and kicking in the middle of things, it’s also got a lovely big estuary and harbour and some fantastic cliffs and rocky coves nearby.

On Saturday, emptied, washed, full and after making full use of all the campsite facilities, we drove about half a mile round to the next beach. Praia de Donna Anna isn’t very big as beaches go but it has these fabulous sandstone cliffs and pillars on the beach.

The rock they are made from looks like builder’s rubble and you can crumble it in your fingers. The sea and the wind are eating away at it and the cliff edge is obviously eroding at a rate of knots. 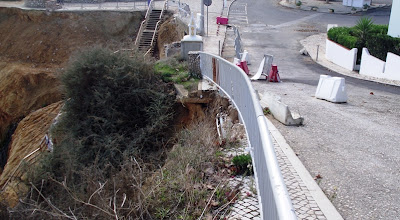 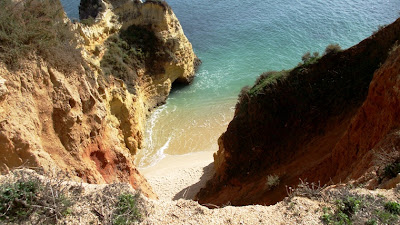 There are warning notices all over and it all looks very unstable with big cracks in it; you can see lots of places where the path used to go that now just aren’t there. Confident that today wasn’t a cliff collapsing day, we walked back along the path to Lagos and looked round the bits of the town that we missed the day before, including a marina with money dripping off the walls. Then we drove on to the end of the road at Ponta de Piedade; there is a lighthouse and a long flight of steps down another, slightly more substantial cliff, to a cave network where the sea comes in and turns it into a giant washing machine 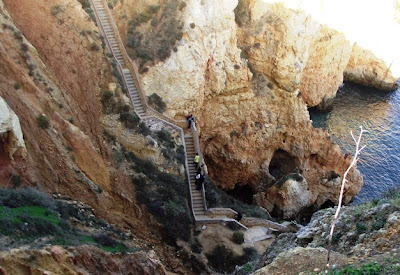 Back in the van we went west again, stopping at Boca do Rio; a middle of nowhere beach that would be completely deserted if it wasn’t for the two or three seemingly resident campervans and the ones like us, stopping for a night or two. 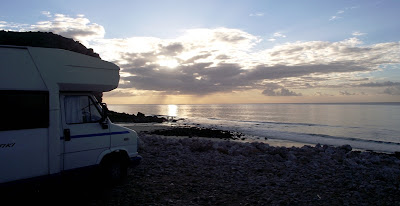 Another night lulled to sleep by the waves.
at November 23, 2010