Dam! We're on the wrong road!

Tuesday saw us in Faro. It was a bit big and touristy for us, we almost fitted into a parking space by the harbour and put a couple of Euros in the meter. That’s when we found out that we’d been an hour ahead since entering Portugal nearly a week ago. It’s on the same time zone as the UK; we were still on Spanish time. We had a quick walk round the town looking at the shops and Christmas lights (it’s still weird seeing them in blazing sunshine). 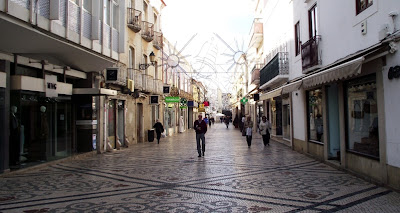 We got our first sighting of nesting storks on top of a church tower in Faro; they seemed to be having some sort of dispute over who owned which nest and there was a lot of flapping and clattering going on. They are really big birds and very graceful in flight, but they make a right racket! 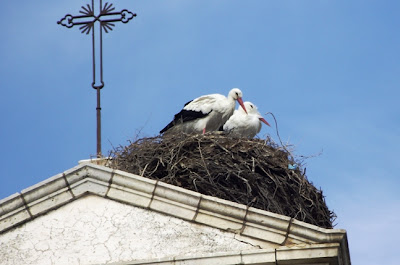 We had a half hour Mcwifi and then returned to the N125. After following the coast for a while we took a little white road towards the sea which got thinner and rougher as the golf courses and villas ran out. it finally ended in a car park in the dunes at Ancao with boardwalks to two beach cafes and another big, deserted sandy beach. 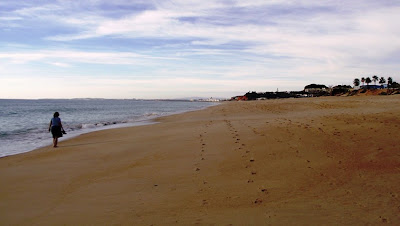 We exercised our calf muscles on the soft sand for a couple of hours picking up yet more shells before finding out that the beach cafes had just shut. We consoled ourselves by finding out that one of them is frequented by Judith Chalmers who apparently owns a house around here.


On Wednesday morning it was grey and rainy again, so with the hope that it would clear up later we set off away from the coast into the hills. We stopped in Loulě in the rain and sat in the van with a cup of tea. After a while it did get a bit brighter so, armed with umbrellas we ventured forth. There was a small but very energetic covered market with some fantastic fish stalls; everything from shrimps to barracuda on sale. Portugal seems to have a disproportionate number of hardware shops per head of population so Dave was in his element.

As the weather was improving all the time we drove further into the hills following a white road towards a dam which we thought would be a nice place for lunch. We wound up the hillside without seeing another vehicle and the picnic area we stopped at was on top of the world and really remote. 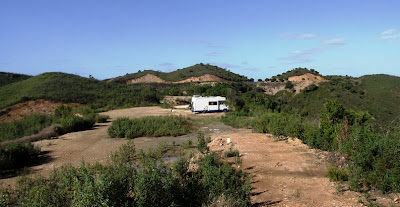 The sun had come out and views were fantastic; just the place for an afternoon siesta. It was only when we tried to follow the road down the other side and found ourselves at a dead end at the base of the dam that we realised we were off the map and actually at a different dam altogether. 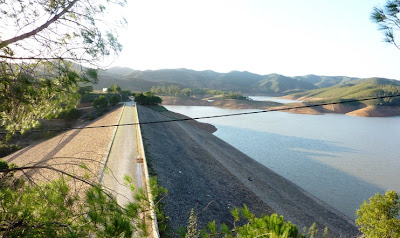 When we’d re-traced our steps and got on the right road it turned out to be thinner and twistier than the one we had been on. After a long day we drove into Silves just before sunset, found an empty car park and stopped.
at November 18, 2010