It's Britain Jim, but not as we know it!

After our quietest night ever at Castillo de Castellar we carefully descended back down to the main road and pointed ourselves at Gibraltar. The early morning traffic began to thicken up as we went through La Linea and got totally mad as we approached the border. We joined a mêlée of mopeds and battered hatchbacks all trying to get through the customs control point at the same time. With hardly a glance at our passports we were waved through and again found ourselves surrounded by the same bunch of maniacs all now racing to get a parking space in a city without any.
Piece of advice; NEVER, EVER try to take a 3m high, 6.5m long camper into the City of Gibraltar! Dave has been driving artics for 20 years and is unfazed by narrow twisty city streets; if the van will fit then he’ll get it in. Even he came close to losing it when, after avoiding all the “No Campervans” signs which sent us round the one way system, we were confronted by a “No Entry” one way, a height restriction another and an impossibly narrow 1-in-4, meaning we had to do a three-point turn across a junction on a hill. The place is full of “Thou Shalt Not” signs, without any helpful ones. We considered ourselves lucky to get back out in one piece and with only the paint we went in with.
Having got back to the roundabout at the airport we found a sign that said “Beaches” and set off in the opposite direction. In less than a Kilometre we came to Catalan Bay; big, almost empty car park overlooking the sea. In we went and there we stayed for three fantastic days. 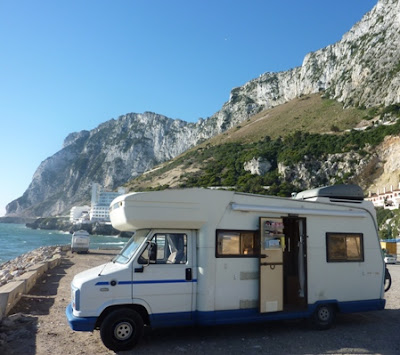 After lunch on Thursday we cycled back in to the city, found a bike rack just inside the Landport Tunnel and walked up Main Street, agog. Everything about Gib is fascinating and slightly odd. There’s BHS, Marks & Spencer’s and a Post Office as well as pavement cafes, Halal butchers, Asian spice shops and back street shops that look tiny but go on for miles rammed floor to ceiling with everything from chandlery to chandeliers. 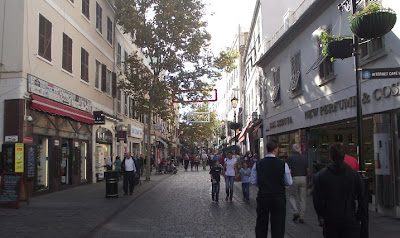 It’s got black and gold street bollards and litter bins embossed with “City of Gibraltar” and it’s overlooked by a Moorish castle. There are red phone boxes and letter boxes, there’s King St, Queensway and Parliament Lane, and every available corner is used for parking mopeds and battered hatchbacks. Space is so tight in Gib that there are only about twelve houses left with gardens. It is slightly claustrophobic till you get used to it. The military presence oozes out of every building; King’s Bastion, Garrison Library, Governors’ Residence. All the signs are in English, prices are in pounds and everywhere you walk you hear a hubbub of different languages. We had some very good fish and chips for tea, outside in the sun, with Christmas lights strung above our heads, served by an Arabic waiter who spoke seven languages. Prices in the shops are expensive, apart from the duty free stuff, which is dead cheap. We paid £2.50 for a jar of peanut butter, and then bought a litre of Bombay Sapphire for less than a tenner. Diesel was 83p a litre; we’ve been paying 1.10€ in Spain and we thought that was cheap!

On Friday we went up the rock. “Up” and “Rock” take on a whole new meaning here; it is just huge. The wind was coming from the east while we were there; the moist sea air gets forced up the sheer rock face and meets the cooler air from the other side at the top. It instantly forms a cloud which then drifts away from the peak to the west forming a shadow over the other side, keeping it cooler and perpetuating the whole process. Watching clouds develop at that rate is hypnotic; it’s as if there’s a giant candy-floss machine at work.
We caught the cable car to the top and got really excited when we saw a couple of the famous apes (actually tail-less monkeys) at the half way point. 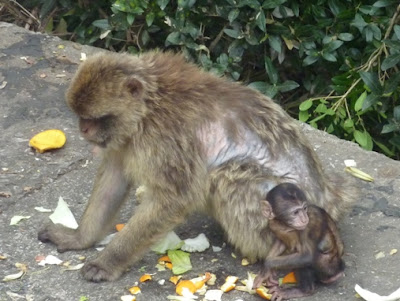 Of course at the top there were loads of monkeys everywhere. They are totally unafraid of people; in fact most people are rather wary of them. They are highly skilled at stealing food; you get a lecture on not opening bags or eating anything where they can see you, but not everyone takes notice. We saw a lady get mugged for a bag of crisps and a young lad lost a carrier bag with a new pair of jeans in it.
There’s a lot to see on the upper rock; the whole place is a nature reserve and there are tunnels and gun emplacements from various conflicts all over the place. We avoided the throngs as much as possible and followed the path from the cable car station to the southernmost point, where we sat on a gun battery in the sun staring at Africa. After lunch we gradually wound our way down to the half way point and then climbed the 400 odd steps straight back up the Charles V wall before taking the cable car back down to sea level. There are over 300 monkeys in 6 different troops at various locations; we found ourselves saying “Excuse me, Monkey” a lot. They are incredibly cute; the parents make little clucking noises when they’re re-united with their offspring and family groups all sit in a huddle grooming each other. Even tiny babies make gut wrenching leaps off the side of the cliff into the trees further down, then chase each other through the branches. The height makes you giddy to start with but after a couple of hours of it you start to worry less. There is one bit at the Douglass Lookout where the path along the ridge is so narrow you can see straight down to Catalan Bay on one side of the Rock and straight down to the City and harbour on the other. 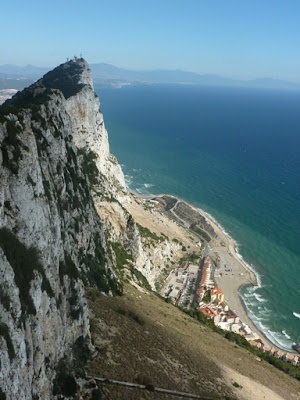 On Saturday morning we cycled into the city again, had a look in the shops, went into a tea room and had a cream tea and generally killed time until 12.30. That was when we’d booked seats on the “Brixham Belle”; a beautiful wooden 1950’s pleasure boat, now owned by Dolphin World, to go out into Gibraltar Bay to see the dolphins. It didn’t take long. We spotted the first pod after about 10 minutes and for the rest of the trip there were always some within sight. In the bay there are several hundred resident Striped, Common and, further out, Bottlenose dolphins and they love playing tag with boats and then surfing through their wake. 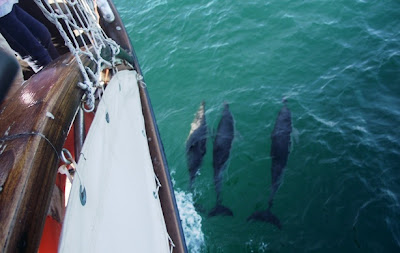 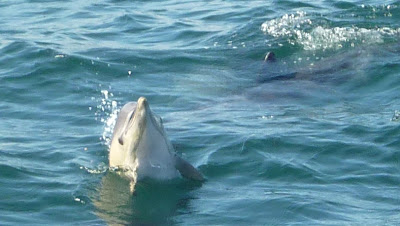 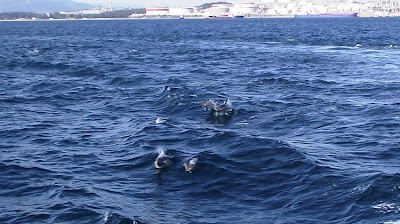 The captain and crew were brilliant; the boat was always in the right position for us to see and they were continuously pointing out the different species and individuals and telling us all about their habitat. It’s amazing watching the acrobatic leaps out of the water just for the fun of it and we’ve got no end of photos of a big plume of water just after the dolphin disappeared. 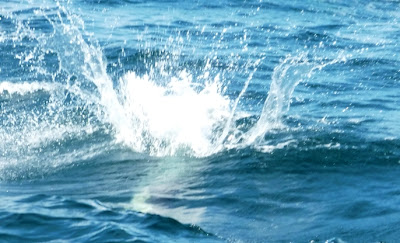 It was very moving; one of those days we’ll remember for a long time.


PS. We think the “Flipper” photo is a Bottlenose. If so, it's Billie who was abandoned by her own pod when she was young and now lives with a pod of Common Dolphins. She's twice their size and they would normally be her prey, but she grew up with them and thinks she's one of them. If anyone who knows about such things can confirm it we’d be over the moon.
at November 08, 2010