I don't think you wanted to do that!

On Tuesday morning we went to check out opening times for Santiago swimming pool after spending the night in the car park behind it. Although it opened at 8am, from what we could make out with our very limited language skills, there was an over sixties session until 10, so we headed off towards Lisbon. At Setũbal we made two rather expensive mistakes. First we turned right at a set of traffic lights when we should have gone straight on and found ourselves on a toll motorway going in the wrong direction. Big Mistake. Second, we went through the wrong toll gate so that when we found a junction to get off at, we didn’t have a ticket. Big Mistake, Huge! They had no option but to charge us the maximum rate of 55€. On top of that there was 40kms worth of diesel to get us back to where we went wrong. Needless to say we were not happy bunnies, and when we went over the toll bridge into Lisbon and went through the wrong gate again, setting off all the alarms, it just about put the tin lid on it. This time Dave walked back to the gate and got a ticket.

Even without the sun shining on it Lisbon looked magnificent, but we didn’t feel much like trying to find van sized parking in the rain, and as we’ve said before we’re not big city people. 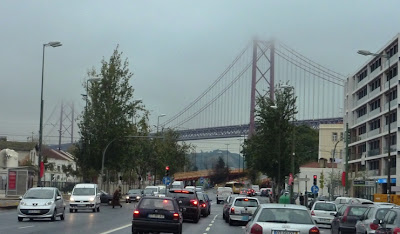 We drove round the coast to Cascaias then up and over the headland to Cabo de Roca; the most westerly point of mainland Europe. In March, in Cyprus, we were at the most easterly point. It’s been a fantastic year! As we watched the sunset over the Atlantic we thought about people watching the same thing 300 years ago when no-one knew what, if anything, was beyond the horizon. We also thought about flying over it in January on our way to New-Zealand. We went to sleep parked under the lighthouse. 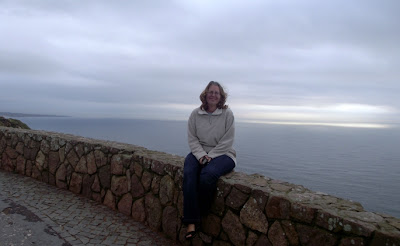 On Wednesday we were up bright and early and off northwards again. It was a rather grey and overcast day so we aimed for mileage over sightseeing. Having said that we did follow a couple of little roads with “scenic route” green lines, we only did motorway stints when we wouldn’t miss anything and, after what will be forever referred to as “The Lisbon Episode”, it was free! We passed the walled city of Obidos, which looked worth a visit, stopped for lunch near Alcobaça, and for a leg-stretch and a look around at Figuiera da Foz, where there was a giant sun-dial on the quayside. 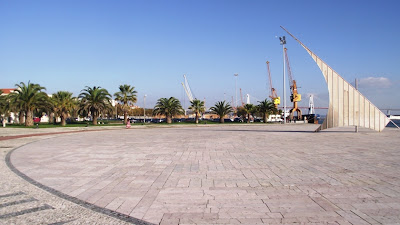 The scenery has changed again; we’ve left the cork-oaks and eucalyptus behind and are now in pine forests. We finished up for the night at Praia de Mira, which, like most of Portugal, is very pretty and clean. No doubt in the height of summer the beautifully tiled hotels and apartments are full of holiday makers. 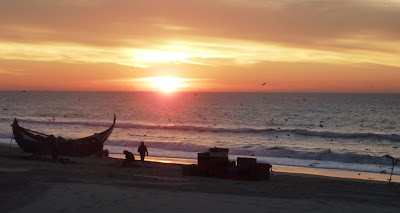 Now, half way through November, everything is shuttered up and the fishermen and the seagulls have the beach to themselves.
at November 25, 2010