One day we’ll go back to Toulouse in daylight and have a good look round; from what we saw it’s worth a day’s wandering, but trying to drive through it at night was a bit of mistake. We took a wrong turn and ended up squeezing the van through some very narrow streets teeming with party people in what appeared to be one of the hottest night spots in France! Great fun, but not getting us where we wanted to be. We got spat out and had a couple more goes before giving up and following the big signs for the Peripherique. Heading away into the night towards Lavaur, we stopped at the tiny village of Teulat. On Saturday we drove into Lavaur; we were going to drive straight through but they’d put on a street market so it would’ve been rude not to stop. We’re glad we did; we bought elevenses and discovered a gigantic cathederal. 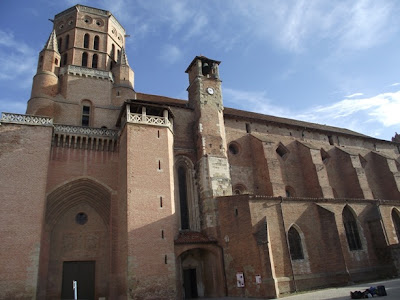 Not as dramatic as discovering the Source of the Nile or Penicillin, but we were happy. The acoustics inside were amazing and there was an enormous pipe organ high up at the back to take advantage of it. When we got back outside it was almost ten oclock and there was a little crowd of people waiting for the statue in the bell tower to hit the bell with his hammer. 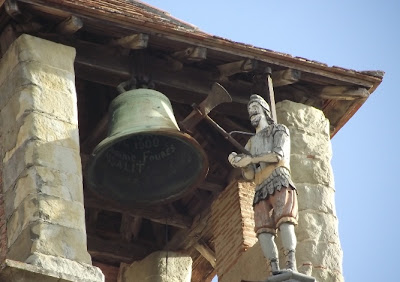 Dave filmed the prestigious occasion, but it wasn’t all that exciting. Our next stop in a busy day was Castres; when we got there it had just shut for lunch so we walked down to the river and back and carried on to Lautrec. Lautrec is a gem; you could drive past it without realising what you’re missing. From the very ordinary looking car park steps lead up to a covered walkway that opens out into a maze of medieval alleyways that weave their way through timber framed houses. 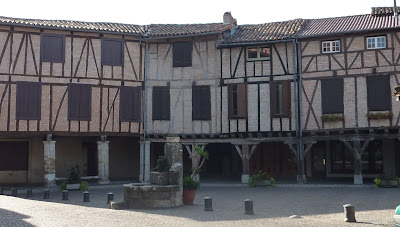 Not only is the whole town crammed on top of a hill that is far too small for it; there is also a large convent perched up there as well, and at the very top a stone cross with a windmill just below it.
The only other way in is through an innocent looking arch that you hardly notice as you negotiate the roundabout. We spent a night in the car park, bought croissants and bread from the boulangerie at dawn on Sunday then set off towards Albi.

We’d heard good things about Albi but seeing really is believing. We had a good view of it as we drove in from the south west; it’s a big cosmopolitan city with a cathedral which towers over the surrounding buildings. Walking towards the centre from where we’d parked we passed grand fountains, formidable looking stone and slate mansions and modern plazas, before entering the old part of the city. Three bridges span the Tarn; overlooking them the massive St Cecile Cathedral and the Bishop’s Palace. Underneath the latter is the Toulouse Lautrec Museum. It was only when we saw it written on the wall that we realised the artist’s name is made up from two places we’d just been to. 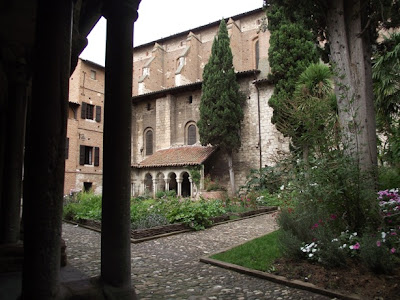 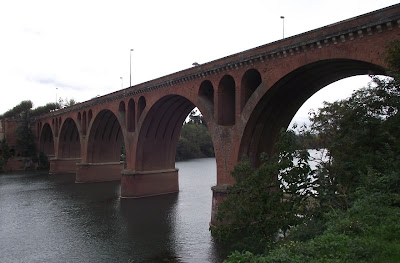 A delicious smelling pizza parlour right outside the Cathedral enticed us in at lunchtime; it started raining while we ate and despite being the last two people left in the place when it closed it hadn’t stopped and we still looked like drowned rats when we finally got back to the van. Towelled off and in dry clothes we left Albi in the general direction of Millau via the Tarn Gorges.

On the road down the valley from Requista we found a good looking lay-by and as we pulled up we realised that we were parked under a big Sweet Chestnut tree. 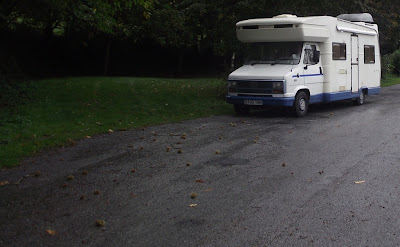 The ground was strewn with spiny cases and we spent half an hour or so collecting a bag full. We had some for starters but we put most of them away to give to people at Christmas.

It rained most of Sunday night and Monday morning. After breakfast we drove alongside the Tarn as much as we could; there was a road closed at Brousse-le-Chateau which meant a bit of a detour up some very wiggly stuff but it all adds to the fun. We had the video camera running for a lot of it; when we get a faster hook-up we'll put some of it on Youtube. We left the river at St-Rome-de-Tarn and climbed up to Montjaux where there is a fantastic view of the Millau bridge, then carried on with some more windy roads through St-Beauzely to join the southbound A75 just before the tolls. We stopped in the Millau Services and walked up to the viewpoint. The bridge takes your breath away; the facts and figures are astonishing, especially when you realise that apart from being the biggest, longest, highest whatever, it also climbs and curves. When the French show off they do it well! We drove over it in a cross wind but the plexi-glass barriers mean you hardly notice. It’s a long way down though! We came off the motorway at the next junction and stopped for the night in a lay-by overlooking the Cernon valley. On Tuesday morning we drove into Roquefort-s-Soulzon; famous for its cheese. There was a convenient campervan services so we pulled in to top up with water. We’d bought a lay-flat hosepipe in a supermarket and this was to be its first use. Dave connected it to the tap and turned it on; at first we thought it had a pin-hole leak, then we saw another one, then another, then we both fell about laughing. In our happy ignorance we’d managed to buy an irrigation hose!

When the water tank was finally full we parked up and went for a walk up through the town. There are seven Roquefort Cheese makers all within a strict 3km x 200m boundary; we went to Papillion where we were treated to a film and a free guided tour of the factory and cellars. It was fascinating; the mould that makes the green veins is cultured in part-baked bread left in the caves where the cheese matures, then ground up and added to the cheese with the rennet in tiny amounts.

We left Roqufort with our cheese quarter in the fridge and set off towards Beziers and the Mediterranean, stopping for the night in a big lay-by along with half a dozen artics. Dave felt quite at home!
at October 13, 2010