On Monday we wanted to get some miles under our tyres; we were hoping to get to past Malaga on Tuesday to spend a few days with Bee & Billy, but before that a bit of exercise felt like a good idea. We followed the coast getting into Agua Amarga around 10am; a quiet little village in a Parque Natural where we parked on the beach near some other vans. 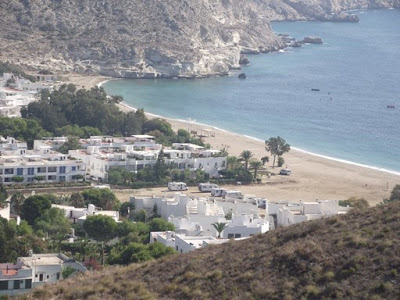 We’d noticed a footpath on the map which went from there to El Plomo; the next cove about 5kms away. It was a steep hike up, then an equally steep controlled fall down to a deserted, beautifully clear, sandy bay. 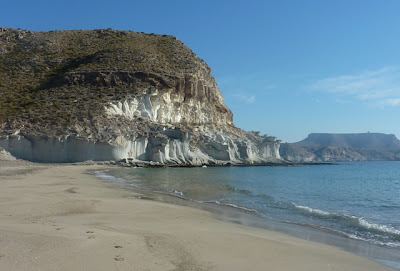 The sea was perfect for swimming, there was a six foot deep drop from the rocks that could have been made for diving and we had the place to ourselves for about an hour. In fact the first people we saw were another couple that we passed as we were on the path back. By the time we’d got back, had a walk round the village and had lunch it was about 3pm; as we were in such a lovely spot it seemed silly to move on. Total mileage for the day; 30km. Hey hoh, that sort of sums it up.

On Tuesday we proceeded in a westerly direction along the A7, AKA the Mediterranean Freeway at a steady 55mph. We bypassed Almeria and then drove for about an hour with nothing but poly-tunnels as far as the eye could see in every direction. And the eye could see a fair way; the motorway runs along the base of the foothills of the Sierra de Gaddor and you have a view out over a delta towards the sea. Apart from the occasional building poking out there is nothing to see but off-white plastic sheeting. As we drove along we got the odd glimpse inside some of these huge structures; row upon row of tomatoes, peppers and fruit trees along with loads of other things we didn’t recognise. There is so much of it you can’t get your head round it; the covered area must run into hundreds of square miles, and most of it looks like it’s small private enterprise stuff. On the other side of the road as the mountains get steeper it starts to thin out a bit but there are still quite big swathes clinging on quite high up. Again, it’s employing local people and attracting foreign money into Spain, which has to be a good thing.

We stopped at Motril to catch up on emails, then on to Malaga, and out to Alhaurin el Grande, where Bee & Billy live. They’re friends of ours from the UK and have been out here for 7 years with 8 dogs. Since we’ve been here we’ve had paella, been to a carvery, had a trip into Malaga and been out for a quiz night. Finaly, on Friday we all had a day out up at the impressively named Embalse del Guadalteba-Guadalhorce; a beautiful reservoir and dam in the mountains. The water is aqua-marine and although we took swimming togs was just a tad too cold. 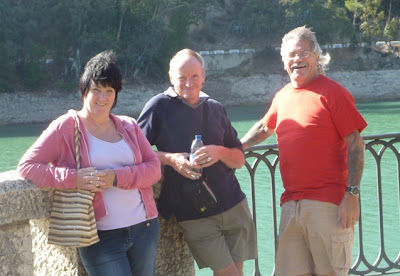 We stopped at a restaurant for lunch then carried on along the river through the Garganta del Chorro; a vertically sided gorge with the railway bridge made famous in “Von Ryan’s Express” going over it. 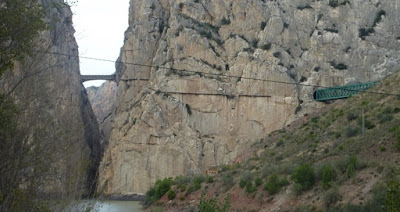 The road through the mountains is spectacular; towering sandstone cliffs with enormous gouges carved out of them, ancient testimony to previous river levels.

On Saturday we’re back on the road again, with another new tyre (yes, we should have got two in France), and our destination is Gibraltar. There is talk of getting a ferry to Morocco; we’ll have to wait and see!
at October 30, 2010