We’d been driving every day for a week, so on Saturday the van stayed put. We cycled into Puerto de Mazerron, had a wander round and posted some cards. There was a bike shop with some electric bikes; Dave had a go on one and was suitably impressed. They were different from others we’d seen in that the motor was mounted on the front down tube driving the pedals and there wasn’t a twist grip to activate it; you simply started pedalling and the motor gave you a helping push. It was a strange sensation, but one you could get used to. We’ve made a decision regarding bikes and boats. Despite there being some very cheap electric bikes out here, were going to keep the hacks that we’ve got till we’ve been on the boat for a while then assess how useful something like that would be. If it ain’t broke etc. We rode back to the van and spent the rest of the afternoon on the beach. 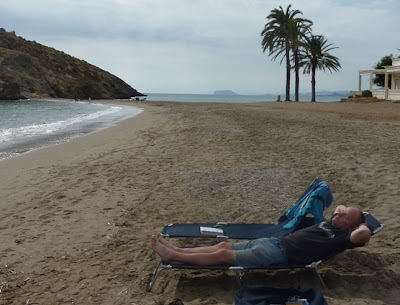 Sunday was a day of contrasts. We were up at dawn for a morning dip in the sea and a shower on the beach; a Spanish couple out walking their dog must have thought we were mad, but it was incredibly invigorating. We watched the sunrise while Dave turned a very fetching shade of blue, then we had lashings of tea to warm us up again. We packed up and set off inland; we’d picked up a leaflet from the tourist office with directions to some hot springs not far away so we went to see if we could get there in the van. The unmade track to the spring followed a “Rambla” - a dried up river-bed – and it looked a bit much for our low ground clearance so we parked up and started walking. 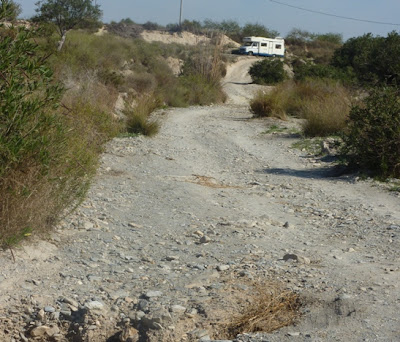 After about a kilometre we came to a large concrete circle with a pipe coming out of the ground. At the other side hot water was pouring out into a string of shallow pools. And it was hot; 55 degrees! Too hot to stand under and the first pool was like a very hot bath. There was no-one about so we got our kit off and floated about in steaming, slightly cloudy mineral water under the blazing sun for about half an hour. 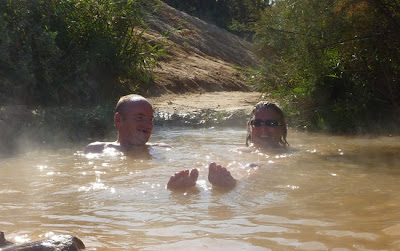 Suddenly we heard a car pull up and we both leapt out and wrapped ourselves in towels just before a Spanish chap in swimming trunks came through the bushes. We got dressed and walked back to the van feeling rather light headed but with very smooth skin. We carried on to Lorca, then came back to the sea at Aguilas where we drove down to the seafront and parked in the harbour car-park. There was another UK van there and the lady in it very kindly gave us (via a memory stick) a load of useful info about wild camping in Spain and Portugal; where you can park, where to get water etc. People are so nice.

We walked into the town and had an ice-cream followed by a siesta in the back of the van, then set of down the coast again. We’re sure that where we spent the night has a name but it’s not on the map. It was somewhere between Sopalmo and Carboneras, there was a little beach bar where we had a beer before tea and there was a big building project going on in the hills behind us. There has been a lot of building going on in southern Spain. “Urbanisations” dominate a lot of the view; thousands of identical villas separated by flowering hedges and palm trees sprawl out around bright green golf courses. Each brightly painted block ends abruptly against a perimeter wall, beyond which the arid land is being feverishly churned up in preparation for the next sector. No doubt the local economy is benefiting hugely from all the foreign wealth, and there really is no argument against that, no matter how much you think it is all a blot on the landscape.
at October 26, 2010

yeah yeah lovely but hey you don't know what your missing .....Got up this morning Brrr cold but no frost today , no its raining instead whoopee! went to WORK,,,, still cold ended up working till 8 pm ,rain stopped so now just cold oh look another day over , see who on earth would want to be wasting their time drifting around Spain i ask you !
:)