Wednesday was Bob’s first big day out; Jacqui & Ali up front and us and Donna & Richard, who are here for a week, on cushions on the floor in the back. Ann-Marie tried to get everyone singing “The Wheels on the Bus” but all we could get out of Ali was “Bob-Bob-Bob-Bob....” 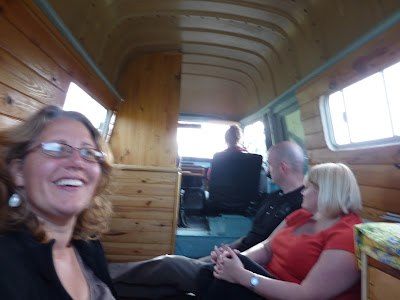 It was a really good day; we went to Montech followed by Moissac. On the Canal Du Midi at Montech there is the Pente d'eau de Montech; a massive diesel powered inclined plane. Two train engines on rubber tyres push boats and the water they’re floating in up a concrete channel by-passing five locks.

While we were there a couple of boats came down the canal and we watched them go through the top lock. 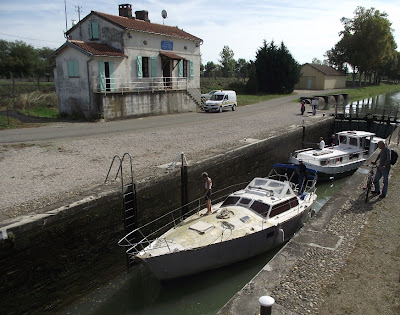 Moissac is a pretty little town, the Canal goes right through the middle and La Garonne flows along the edge. It’s mostly notable for L'abbaye Saint-Pierre, a medieval abbey and cloisters that survived crusades, civil wars and the Revolution only to be unceremoniously slashed in half in 1860 to make way for a railway. We stood in the footbridge over the line looking in amazement at this magnificent ancient monument as a train hurtled through the middle of it. Then we got a French stick and had a picnic on the river bank.

On Thursday morning we went to Castelsarrasin, the nearest big town, where there was the weekly traditional French market including a big shed with livestock. We spent a couple of hours wandering around looking at all the cheeses, breads, flowers, fabrics and animals. Then, predictably, we went for a stroll along the Canal which runs along the edge of the town. The mix of vessels along this beautiful waterway is fascinating; big Dutch style barges moored alongside traditional British narrowboats, with river cruisers, yachts, even a 40’ ocean-going catamaran adding to the colour along the towpath. 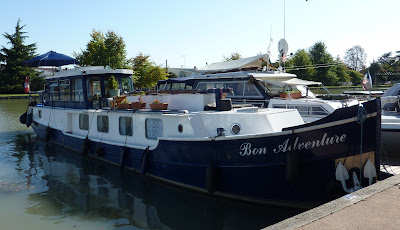 In the afternoon back at Coutures, a big white van came down the lane and a very nice delivery driver handed over a lovely new shiny galvanized steel 1986 Fiat Ducato radiator. There was much rejoicing!
We have no connection with Hartlepool Radiators, only as satisfied customers. their website is dead easy to use, postage was about half what normal mail would have been and the right radiator got to us. Nuff said. 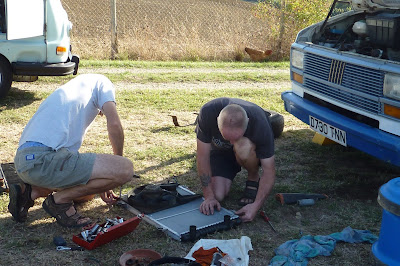 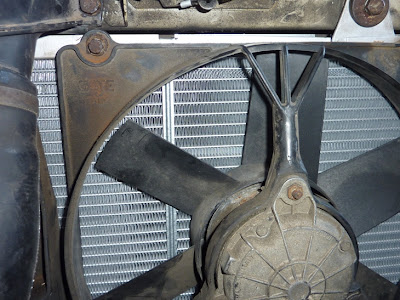 Earlier on Dave and Ali had fixed the cooling system on Bob, he had come out in sympathy with the Kon-Tiki and was overheating as well. His problem turned out to be a sticking thermostat combined with a burnt-out fan motor. They pulled a fan off Ali’s dead Subaru, fitted it to Bob’s fan housing and had just got Bob fixed when the courier arrived. We don’t just throw this together you know. So there were two happy vans outside and lots of happy people inside. The cooker mechanic phoned to say he’d be arriving in the morning, with luck normality would soon be restored. We decided to continue our travels on the morrow; taking Donna and Richard to the airport at Toulouse and then going off towards the Med.

Friday update. Last night was a farewell from Coutures. We played pontoon for M&Ms; Ali was out first ‘cos he ate all his money. Jacqui and Ann-Marie attacked a bottle of gin and took no prisoners and it all ended with fits of giggles when Jacqui declared that everyone had to speak French proper accents. This morning was a gentle affair; lots of coffee and asprin. The electrician came and couldn’t find anything wrong with the cooker. (It packed up again about an hour after he left; more waiting!)

We left in the afternoon with Donna & Richard on board and dropped them off at Toulouse Departures about an hour later. If we’d been stuck anywhere else, the last two weeks waiting would have felt like forever. In beautiful Coutures it’s just been a lovely two week holiday with our mates. They decided to put off their trip to UK till we come back this way in December. Tonight we’ll stop somewhere between Toulouse and Castres and decide on a route to Spain.
at October 08, 2010