The best thing about Beziers for us was the 9 Ecluses on the Canal du Midi. In fact there is a staircase of 6 locks, but if you count all the gates and the little gate at the end you get 9. They’re all electrically operated and controlled by a lock-keeper and only open for passage at certain times. As luck would have it we got there just as seven boats were going down the last couple of drops. The chambers are a sort of long oval shape; river cruisers fit in 3 or 4 at a time like big jig-saw pieces. 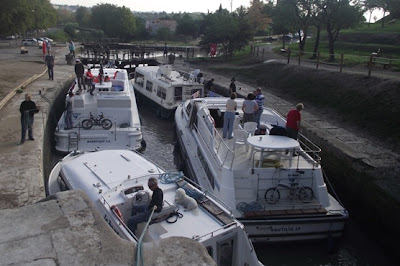 There is another motorised water-pushing boat-lift here as well; it’s a different design to the one at Montech, having only one set of wheels on either side with the diesel engines mounted in the gantry, and looks a lot less used, but apparently it’s in full working order. 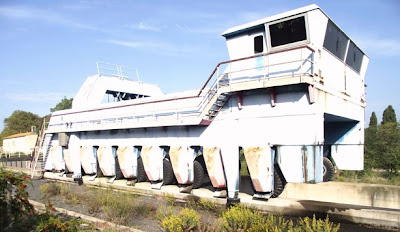 We walked along the canal to the very grand aqueduct over the River Orb then up through some back streets into the city. There’s a large tree lined plaza in the centre of Beziers, leading to a park that slopes down to the railway station; otherwise it was too busy and crowded for us. We drove out towards Narbonne then turned towards the sea, getting our first sight of the Med at St-Pierre-sur-Mer. At Narbonne Plage, after driving past countless “Interdit Stationment au Camping-cars” signs on the seafront, we turned back inland and found a lovely quiet spot at the top of the cliffs overlooking the sea. The view was fab; we didn’t want to park down there anyway. 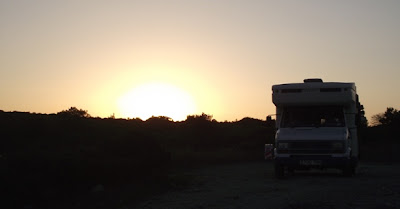 Narbonne is about half the size of Beziers and much more our kind of city. On Thursday morning we parked in a convenient Brichomarche car park and walked along Le Canal Robine which cuts right through the middle. 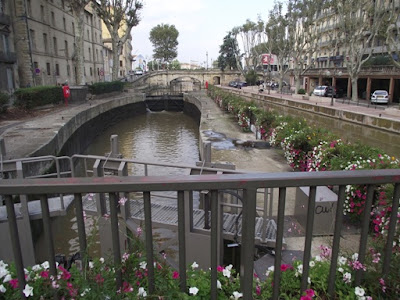 On the edges of the riverbank there was a “Tat-on-a-Blanket” type market with everything from live piglets to plastic flowers for graves, but one street away we found the fabulous indoor food market. We wandered round for ages looking and smelling. The place was packed with fish, meat, bread, cakes, sweets, cheeses, olives and much more everywhere we looked, and all beautifully displayed. We bought a big apple and pine nut cake called, appropriately, a ‘Narbonnaise’. Back outside we found a smaller market also selling food and after being given cheese and sausage to try, bought 4 very tasty dried sausages in various flavours, which will no doubt join the Roquefort cheese in its attempt to leave us with a permanent reminder of its existence in every crevice in the van.
Thursday afternoon saw us in Carcassonne, or more precisely, La Cité. Much has been written about this 19th century restoration of a medieval fortified city, done by a bloke called Viollet-le-Duc in the Gothic-Disney style. 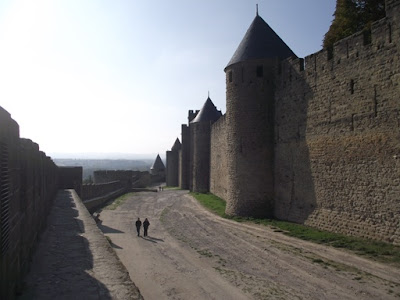 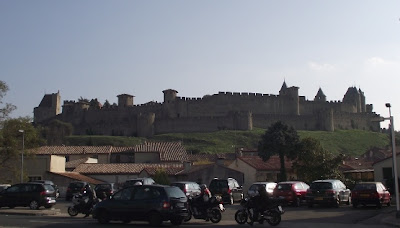 While it could be described as the biggest folly ever built, it is certainly impressive, dominating the skyline from miles away with 50-odd pointy towers and over 3 miles of spiky, impossibly high walls.
From Carcassonne we went south, through Limoux to Alet-les-Bains where we found an open campsite just before dusk. Val d'Aleth Camping gets ten out of ten in our book. We’d had 6 nights off grid so we were more than happy to get plugged in and make full use of a washing machine and a very clean shower block.
On Friday morning we left as late as possible so our washing had every chance of drying then carried on with the Kate Mosse tour. We went south to Couiza, and then to Rennes-les-Bains. (Dave reckons Les Bains ought to be a northern stand-up comic.) We followed the road to Bugarach, where we parked and went for a stroll around the village. Somehow this turned into a two and a half hour trek through the mountains following signs for a roman bridge. We found the bridge; it was very high up, narrow and had no sides. 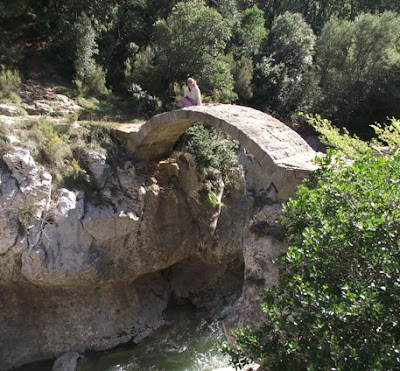 We though it looked a bit delicate, but we figured that as it had been there since roman times it would be ok for another few minutes. After we went over it we found a plaque which said it had been rebuilt in 2004. 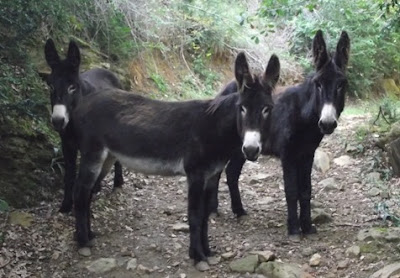 We also found some mules, some mud, some rock climbing and some spectacular views. We got back to the van and retraced our steps to Rennes-les-Bains; there was a height restriction that made going on impossible in the van, luckily Ann-Marie spotted it marked on our map. We circled round, climbed up to Auriac and then under the gaze of two magnificent chateaux; Peyrepertuse and Queribus, before dropping down onto the road for Perpignan. We went straight through the middle and out to Canet-Plage where we turned south along the coast road, getting into St-Cyprien-Plage just in time for tea. Happily there we no parking restrictions, so we had a night right on the edge of the beach. We had a stroll along the sea front before bed and in the morning Dave went out for provisions and found we were 20 yards from a patisserie. It doesn’t get much better than that.
at October 21, 2010