On Saturday we knew we’d be crossing the border into Spain. We don’t speak more than four words of Spanish and “I’d like to buy a 185 R 14 tyre for a camper-van please.” aren’t any of them. Ann-Marie had a brainwave and from free wifi in McDonald’s car-park googled ‘tyre dealers’ in the town we were in. Less than an hour later we were on our way down the Cote Vermeille with a brand new spare. We followed the wiggly road round the coast, crossing the border at the Col de Belistres. We stopped for a few minutes at the top. The spot height on the map says it’s 165m above sea level; it felt an awful lot higher than that, especially with a gale force wind trying to chuck us off! 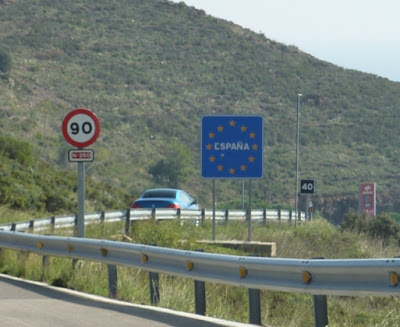 We spent our first night in Spain in the little seaside town of L’Estartit. On our evening stroll along the seafront we passed the tourist office which had a poster in the window advertising a vintage bike rally the following day, so after night of being lulled to sleep by the wind we watched about 50 old bikes pull away on a tour of the local villages. 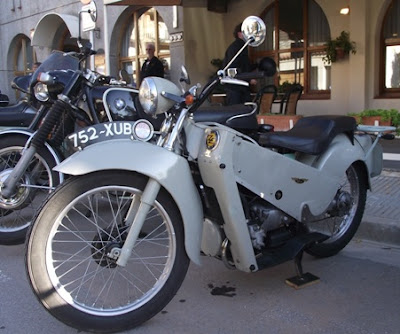 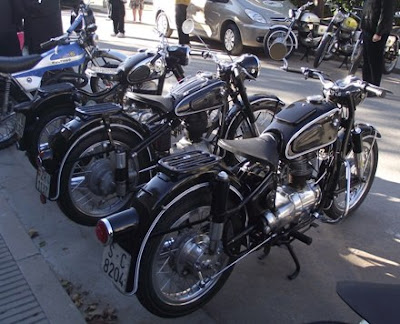 After that we set off, following the coast again and headed for Barcelona. When we got there we threw caution to the wind and went straight through the middle; Dave doing his best impression of a Spanish trucker. We popped out the other side, did a quick email check and post for the price of a McFlurry, then climbed up the edge of the Parc Natural La Morella before dropping down into Stiges. Here we found a wide promenade to park beside and a fabulous sandy beach to walk along in the morning. 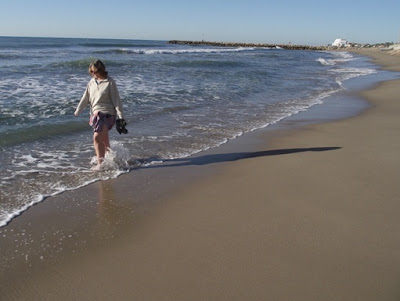 On Monday we fancied a change; from Reus we headed inland towards the mountains. Every pass we climbed revealed a bigger and more impressive vista in front of us. This country is just so big! God knows how we’ll get our heads round Australia. At the top of Coll del Moro (475m) we stopped for lunch. We were going to eat in the van but there was a restaurant that looked friendly so in we went. We sat down at a table, there wasn’t a written menu but the owner came and told us what was for lunch. We did a lot of nodding but apart from “salad” and “steak” had no real idea what we’d agreed to; an hour and a half and 5 courses later we staggered back to the van. And it only cost 20 €! Fabulous, but we had to walk about for ages before we could think about carrying on. From there we went in a big loop back towards the coast. When we got to Morella we found a Campervan service area; fairly rare in Spain, but getting less so. (There is a book which lists them, Click Here, but we didn’t realize its importance till we got here and we haven’t been able to find it in a shop yet. We have since found this site; its in Spanish but google translates the directions well enough.) There were only two other vans there and it had a lovely view of Morella’s fortified town and castle so we parked up for the night. 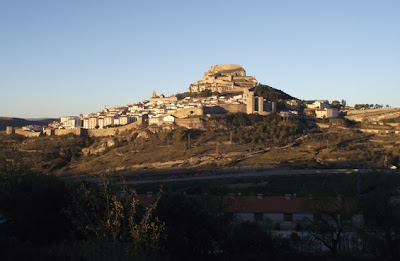 We had a walk up to the town gates that evening, but it was getting late so we left exploring it till the morning. As we were at 1250m an extra blanket seemed like a good idea and we woke up to find the rising sun lighting up the castle and the thermometer saying 6 degrees. We emptied and filled all our various tanks, drove up to the car park just outside the gates and walked into the town in the sunshine. The castle hardly needs signs; you just go up...and up! On the way up we stepped into the Basilica for a breather, and were gobsmacked! Neither of us had ever been inside such an opulent building. The end containing the alter was a 40’ high mass of columns, spirals, balconies and flying buttresses; every inch smothered in gold leaf with cherubs, angels, eagles and goodness knows what else sticking out from or curled round every possible part. 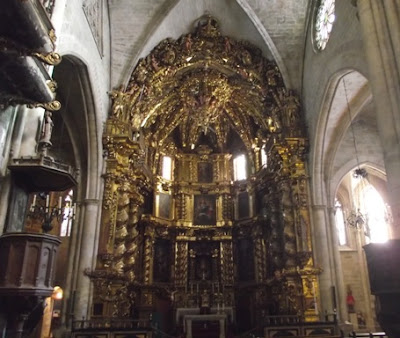 The climb up to the castle was really worth it. It cost 3€ to get in; we got an information sheet in English, there are multi-lingual signs everywhere and we spent nearly two hours going up and down and learning a lot about Spanish civil history. 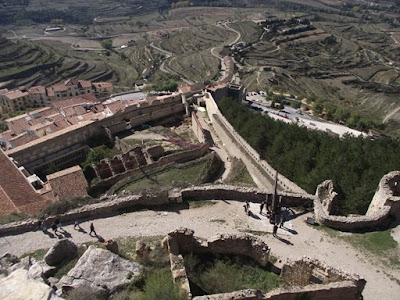 When we came back down we wandered through the town; lots of steep, narrow streets with overhanging buildings and scores of little shops selling locally produced goods. We were lured into a pottery and found a gorgeous jug for the boat, and got the Spanish version of Cornish pasties and sausage rolls at a bakery.

We wanted a slightly warmer night so set off for the coast once more, turning south at Vinaros, passing Castellon and parking at Platja de Xilxes in what is becoming our usual style, i.e. overlooking the sea, followed by a cycle along the prom, game of rummy and bed. 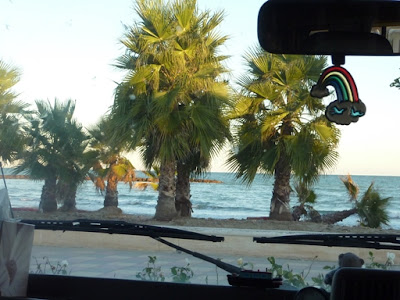 On Wednesday the idea was to cut off a corner and avoid Benidorm, so we went south, around Valencia then into the mountains again. We passed Yecla and Jumilla before we got lost in Cleza; Ann-Marie’s uncanny map-reading/guessing skills got us out on the road we wanted towards Mula. Then there was a twisty climb up and snake down to Alhama before the final leg through the growing plains towards Mazarron, just west of Cartagena. We found a fabulous spot at the end of a little back street almost on the beach after our longest day’s driving yet.

238 miles; mostly round hairpins and quite a bit on roads that aren’t on the map. Spain has been extensively rebuilding and re-surfacing its roads over the past few years. This means two things; first, it now has the best highway network in Europe and second, all the maps are out of date. Even our 2010 Michelin Tourist Atlas. So after all that we went for a refreshing swim in the Med before tea.

On Thursday we didn’t feel like going far and thought it wouldn’t be a bad idea to go off for the day then come back to Mazarron for another night in the same spot. We happily bimbled off into Cartagena, without realizing quite how big it was. After taking a wrong turn and weaving the van through a very scary and very seedy bit of what is otherwise a grand and majestic university city, we parked and had a quick look round on foot. As you may have already noticed we’re not big city people; beautiful though Caragena is, it wasn’t long before we were out on the road again. We had a quick stop at a shopping mall to check emails then went off to have a look at La Manga del Mar Menor. On the map it’s a 20km spit of land poking out into the Med with a road on it; in reality it’s 20km of hotels and apartments with sea on either side.

You begin to get a glimpse of just how big Spanish tourism is as you drive along. At the end it becomes less developed with several vacant lots and abandoned projects; no doubt victims of the recession, and there were a few campers parked up for the night on what must be very expensive real-estate. We’d not intended to stop but the view changed our minds, we had a stroll to the end and another night being lulled to sleep by waves breaking on the beach.

On Friday, even though we were up to watch the sunrise, the day vanished before our eyes. We had a couple of coffees worth of on-line time in the mall at Cartagena, trying to find out why Tesco’s Finance has taken six days to clear a payment instead of three. Grrr! Then we did a bit of shopping, then we found the Area de Servicio and filled and emptied everything, then went back to the beach at Mazarron. Not much, and only 60km, but it was still half past four when we got in the sea!
at October 26, 2010