A Van in Vendee

With our step safely back on board we drove to Locmariaquer at the end of one of the arms that form the Golf Du Morbihan. 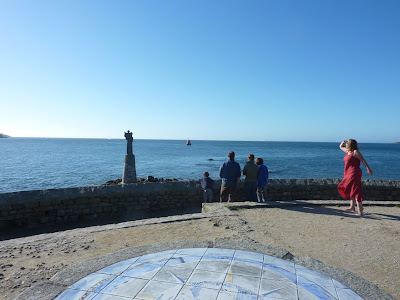 After a look round and a walk along the beach we went back to Auray, then on to Vannes, dodging round the “Route Barré” signs for the half marathon that was being run that afternoon. We ate our lunch overlooking the river in Vannes then went down the other arm to Port de Crouesly. 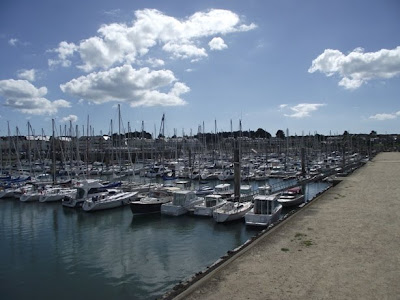 We looked at the hundreds of gorgeous sailing boats moored in the marina then walked past the harbour entrance round the headland to Port-Navalo; fewer, less posh boats. 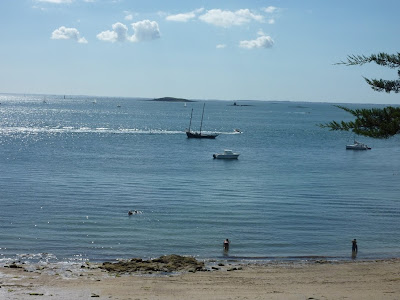 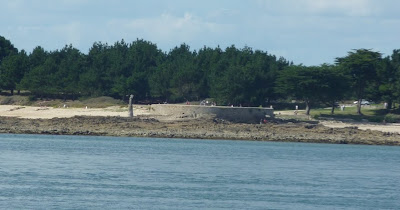 We took photos across the entrance of where we’d been in the morning and then, due to the fact that Ann-Marie had stubbed her little toe on a tree root and needed some sympathy, we had an ice-cream on the way back.
We then set of westward again looking for a night stop. Ann-Marie came up trumps on the navigation department by picking out the perfect spot. 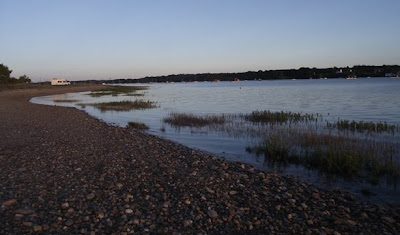 We were on the Vilaine estuary, pulled off the road on the river bank, with the gentlest of waves lapping the shore about 20’ from our door. Dave made a little camp fire on the shore and we watched the sun set into the sea then ate campfire toast and chocolate digestives while the stars came out. 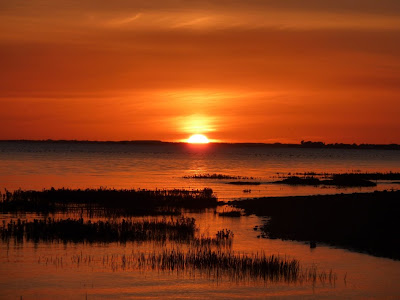 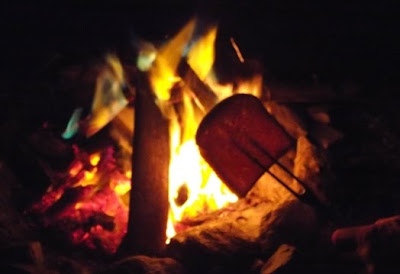 The next morning, Monday, dawned with a mist over the river and a Cormorant flying display. We gave marks out of ten for pairs synchronisation and wave skimming.

A quick breakfast then off again, leaving Brittany behind and heading south into the Pays De La Loire. Round the headland at Piriac and through the salt marshes surrounding Guerande; colourful wheelbarrows and heaps of drying salt around the tidy productive ones, egrets and wading birds picking through others. Through La Baule with its fantastic beach that Ann-Marie remembered from a childhood holiday; then it had big crashing waves, on Monday it was like a mill pond. On to St-Nazaire where we turned south across the spectacular suspension bridge over the mouth of the Loire. 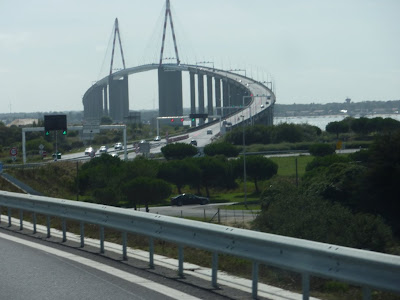 We stopped for lunch at L’Ermitage on the Cote de Jade. The tide was right out so we walked down the long flat beach out to the sea and picked some mussles for tea. (If this is the last post, you’ll know why!) 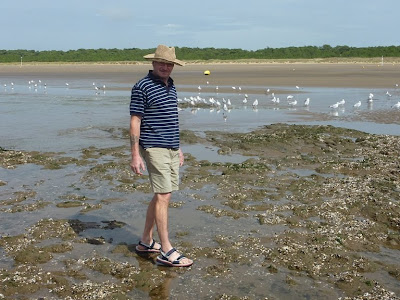 We carried on down the Atlantic coast through Pornic, Bourgneuf, Fromentine and St-Jean-de-Monts, finally stopping at St-Giles-Croix-de-Vie where, thanks to three different supermarkets, we finally managed to get our gas supply sorted out. If anyone is thinking of going abroad for an extended period and is relying on bottled gas it’s worth knowing that the (commonly available in the UK) Calor Gas 7kg blue butaine bottles don’t exist. In fact Calor Gas doesn’t exist. You need to get a contract with a French gas company, hire a bottle and change your regulator. (And find a little gubbins adaptor-thingy; hence the supermarkets.) Then you have to carry the French bottle around inside the van ‘cos it won’t fit in the gas locker and you’ve got two empty Calor Gas bottles in there anyway. More stuff cluttering the place up.
We decided that after three nights on the side of the road it was time for a campsite so after a walk round the town and another ice cream (Ann-Marie’s toe still hurt) we set off again. We stopped at one or two closed sites before finding one that looked open at Brem-sur-Mer. The barriers were up but the reception was closed. It was getting late, so we drove in, found a pitch and set up, closely followed by a French van doing the same thing.
It’s a very pleasant site, lovely showers, electric, water and very quiet. It should be 17 euros a night. The mussels were delicious; if we’re still here in the morning and we see someone we’ll pay them.
at September 15, 2010