We got to Sparsholt College on Tuesday morning. We all knuckled down and got well ahead of Carol’s schedule for setting up for the 2CVGB National Meeting. Just as well; it rained constantly on Wednesday. The set-up crew sat in the information tent watching the fire buckets fill themselves, dashing out whenever it looked as if it might brighten up to bang another sign into the increasingly muddy ground. On Thursday morning there was still the odd shower but by opening time at 2pm we were ready. We’d had rubble laid on the entrance and exit gates, and a bark chip roadway spread across the main drag through the site. A steady flow of club members started arriving, and barring having to push the odd one through a gateway, two days of rain had very little adverse effect on what turned into a thoroughly enjoyable meeting. The weather got better through the Bank Holiday and most people went home with dry tents. On Saturday we had a little stall in the flea market; Citroen paraphernalia at incredible prices. We now don’t have anything in the van that doesn’t belong in it. For Dave the highlight of the meeting was the Rocker Cover Racing; a just-a-bit-of-fun-but-can-get-intensely-competitive contest where home made vehicles, constructed from at least one 2CV valve cover and powered solely by gravity, race each other down a sloping track. Dave’s started off as a simple three wheeler, but then Heath-Robinson took over; he thought it would be fun to have a video record of the descent so he mounted his camera on it. The bad news is he got knocked out in the first round, for the good news click here.


Ann-Marie’s favourite was a tour round the college farm on a tractor & trailer where she got to see piglets being born and held a day-old one, and had her finger suckled by a calf.

On the Saturday night there was a toga party; we put a couple of bed sheets to good use, made head-dresses out of a nearby hedge and were thoroughly overshadowed by a lot of people who’d put far more effort in. We do, however, claim kudos for not wimping out and wearing a T shirt underneath. 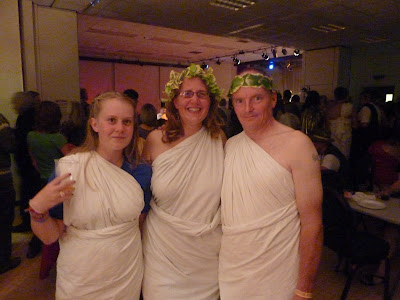 The Meeting ended on Monday; it was all over so quickly. Coops & Carol did a fantastic organisation job and we were proud to be part of their crew. By Tuesday afternoon the site was spick and span and Dave and Coops were in a big Transit heading for Lincolnshire to put all the equipment back in the club’s lock-up. We stayed on their driveway that night and on Wednesday morning headed back up north via Ann-Marie’s parents house to say goodbye; we’re at a party near Sherringham this weekend, then down to Dover and on a ferry on Tuesday.

Of course being at the National meant we also got chance to see loads of our mates from the 2CV club and let them know what we’re up to. Talking of which; we’ve had a change of plan. What – us? Who’d have guessed?

Before buying our boat we were going to take five months going round the world; Singapore, Australia, New Zealand, Fiji, America, home. We’d talked to a couple of travel firms who put trips like this together and finally picked Trailfinders as the most helpful and intuitive. They’d found us some fantastic hotels and fly-drive packages, tours, train journeys and all the flights; all the things we’d asked for. We knew it was going to be a lot of money, but we’d told ourselves that it was going to be the trip of our lifetime; we’d never again be in this position. On Wednesday night we went online and transferred the money for the trip out of our savings and into our current account. At 3am we were both still wide awake.

We’re still going to go to New Zealand and Australia, where a lot of Dave’s Cousins live, but for a much shorter time and not until after the height of the tourist season at Christmas. We’ve never had a holiday longer than two weeks before; a round the world trip would just merge into a blur, and when it came down to the wire we simply couldn’t justify spending what amounts to half a narrowboat on a five month jolly. We wrote an apologetic email to Trailfinders and transferred the money back. We’ve been invited to Frankie and Harry’s for Christmas in their new house, so we’ll probably be flying out around the 4th of January and getting back to go boat hunting sometime in March or April. From now until the end of December we’re going to swan about in the warmer end of Europe; we’ve got friends in Toulouse, Malaga and Bordeaux, so that gives us somewhere to aim at.

Lists - Dave’s got a Day in the van on his own on Thursday, so he’s got a little list of outstanding things to do. Nothing has been added for quite a while though.
at September 03, 2010