Here we are then, driving on the wrong side of the road and feeling stupid in shops. Because we’re us, we managed to get a new phone and a cheaper contract in Dover with about 15 minutes to spare before we sailed, then sorted out our European vehicle recovery over the phone while sat in the queue for the ferry. The crossing was happily uneventful; drove on, ate sarnies, read book, drove off. On our first night abroad we met up with Carole and Alastair, friends of ours from Lincolnshire. They were on their way home and parked up in a lovely campsite at St Vallerie sur Somme, near Abbeville. We pulled up outside the gate, walked in and had a very enjoyable evening with them. After two or three glasses of red it would have been irresponsible to have driven anywhere so our first night outside the UK was spent in the visitor’s car park. A bit cheeky but definitely the way to go. On Wednesday morning it threw it down from about 2am. There seemed little point doing anything apart from driving, so that’s what we did. It didn’t stop raining till we were the other side of Caen, from where we headed to Bayeux. 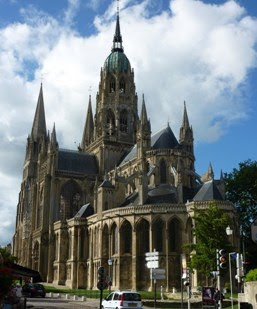 Bayeux Cathedral is breathtaking - sort of Gothic Disney - and huge! We’ve never seen so many stained glass windows. There is restoration work going on and one of the windows has recently been renovated. We were wandering round inside with our mouths open as the sun was streaming through the new glass, lighting up the wall next to it.

Of course you can’t go to Bayeux without visiting the Tapestry. Neither of us was quite prepared for was how big it is; 70 meters long! It’s beautifully displayed in a protective environment in a dedicated museum. You get an audio handset which explains the story the Tapestry depicts as you slowly walk from scene to scene alongside it. There’s lots of other stuff to see in the city and we thought it was well worth visiting.

When we left we headed north to the coast and found a campervan site near Omaha Beach. 6 euros a night with electric; can’t be bad! We had a walk down to the sea after tea, but a combination of cliff erosion, dusk and a high tide meant we never reached it.

On Thursday we carried on along the coast for a bit and drove down to Omaha Beach. 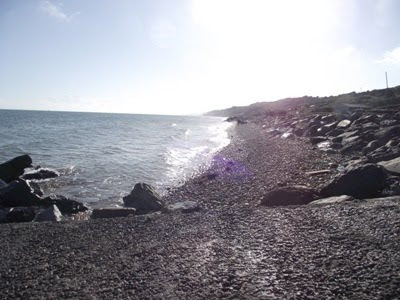 At first it looks very ordinary; grassland leading down to the sea, a café and some dinghies in the dunes, a few tourist wandering about. But then you notice that the tourists aren’t actually wandering anywhere, they’re standing still, and you know that they’re thinking what you’re thinking. Sadness, gratitude, guilt, relief all rolled up together. It’s a very moving place, long may it remain so.
We drove down to Granville, then followed the Rue De Baie, which hugs the coast round to Le Mont Saint-Michel. After finding a site and having an early tea we walked the 2km along the access road. 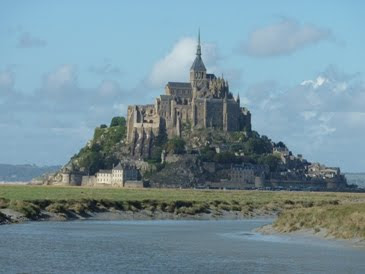 Mont Saint-Michel is very different from it’s English counterpart; it’s a lot bigger for one thing, and it doesn’t get cut off by the tide. It’s also far more commercial with souvenir shops, restaurants, hotels, even a cash machine. The view from the ramparts is amazing; we were there at low tide and there was nothing but sand for miles. It was strange to think that only 6 weeks ago we were looking out of the van windows towards St Michael’s mount.
at September 11, 2010

Spending your first night in the visitors carpark was most appropriate - you are, after all, visitors!! xx

Glad to see you are doing a cultural trip round Europe! Enjoy the vin/vino and keep up the good work with the blog. Enjoying it hugely!
Mary ( Pig Dke)