Plan A on May Morning was to move to Kilby bridge, but it was so lovely at Wistow that we decided to stay another night. We went back down to the garden centre with our measurements and returned with a new rug for the lounge. We wanted a red one but they only had blue or green left, but having got it home we think it looks better. There's already enough red.

We potted up some of our herbs, taking Bob’s advice to add some grit to the compost for drainage. Bob gave us a little chocolate mint plant and a huge bunch of Rosemary that he’d trimmed off theirs. We took some cuttings and saved the rest for drying.

We also booked a couple of flights to France for August. We know it’s a risk, at the moment foreign leisure travel isn’t allowed, but things are starting to open up, and Ann-Marie booked them through an easyJet offer which allows changes to the booking, free of charge, up to 24 hours before check-in. The only slight snagette is that at the moment compulsory pre- and post-flight Covid tests are £200 per person. All the time flying is for business only the money flows like water with impunity, (don’t get me started) however we’re sure that once leisure travel is allowed, neither Joe Public or the airlines will stand for that.

Anyway, Chloe has booked flights down there as well, so if it all goes ahead we’ll get to see all our children and grandchildren for the first time in a year and a half, all at once, for a fortnight in the south of France. It’s 14 weeks away and we just try to not think about it too much because we both get far too emotional when we do. Originally we’d thought we’d go down for three weeks, but that would mean putting Legend in a marina (££) and an extra week of airport parking (££). We decided that instead of three weeks in the summer, we’d rather have two and another two in the winter.

In the afternoon we took our car to Kilby Bridge and walked back. After that we had a brew and a planning meeting with our mates about the next leg of our journey through Leicester.

Just as we were about to set off the next day another boat came past. The next lock was only just round the corner so we gave them a little while before we untied. When we got to the lock we were surprised to see them still waiting, but it turned out there was a little river cruiser coming up, crewed by a couple who’d only just bought it and had never been boating before. Everyone pitched in to help, imparting what little knowledge time allowed, and we gave them a couple of piling hooks. They were very appreciative, but just between us, they were doing us a favour. Over the years we’ve acquired about a dozen piling hooks, as they often get left behind or dropped, and these days we use chains on the armco so we were glad to see some of Legend’s excess weight go.

Then we were off down a few more locks... 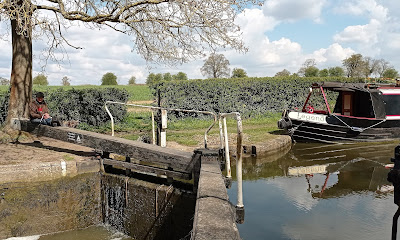 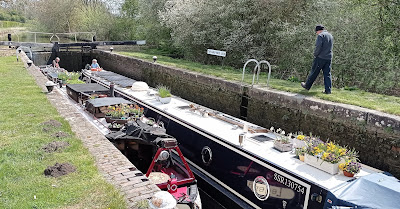 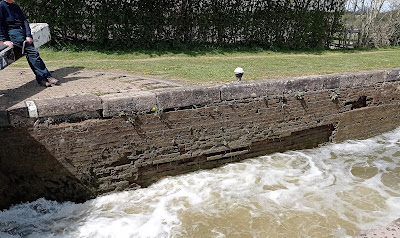 Rather dodgy brickwork! That's going to need some attention before long. 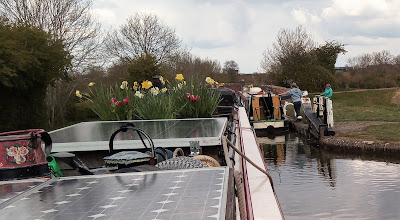 Wide locks are so much easier with two boats.
...and on through the lovely Leicestershire countryside to stop on the 48hr moorings at Kilby bridge. 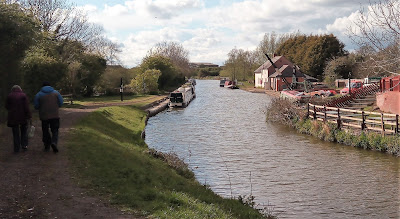 We had a wander up to Wilko in Wigston, but they didn’t have any exterior black gloss either. There’s still no rush though, the tow path is on the wrong side for a while yet.

The next day we moved both cars up to Birstall on the other side of the city. After a coffee in the White Horse we had a delightful walk back down the river corridor, through the parks and gardens, passing the National Space Centre and the Abbey.

The site of Leicester Abbey 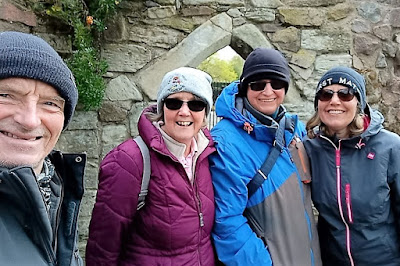 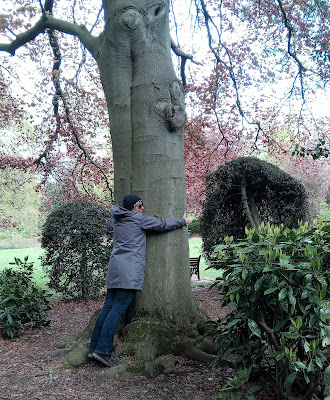 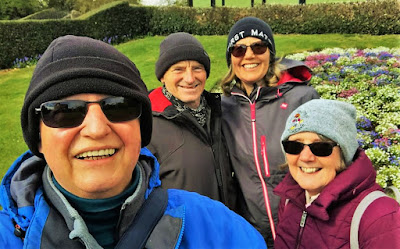 We then followed the tow path into the city centre to check out the moorings at Friar’s Mill and Castle Gardens. After that we got a cab back to Kilby Bridge. We could have done a shuffle and brought one of the cars back, but we’d have missed out on a beautiful walk and the taxi fare was only £10 so it really didn’t seem worth the hassle.

At 10am the next morning we set off for Gee’s Lock. We’d checked it out on Google Earth and found  a stretch of straight armco between there and Blue Bank Lock, below which Linzi had marked some mooring rings, giving us a couple of options. After boating through the ever encroaching city at Wigston, we were pleasantly surprised to find ourselves out in the countryside again as we went round the loop at Glen Pava. 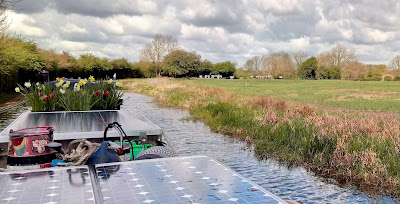 Just before we got to our final lock of the day, dark clouds gathered and suddenly we  were heading straight into a vicious, freezing hail storm. Ann-Marie hunkered down inside, leaving Dave to shelter behind the umbrella, occasionally peeking out to make sure he was still pointing in the right direction. 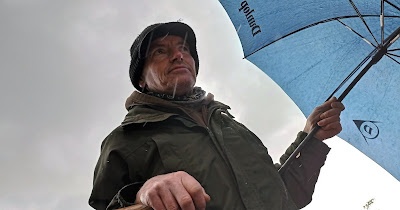 It started to ease off as we worked the boats down Gee’s lock... 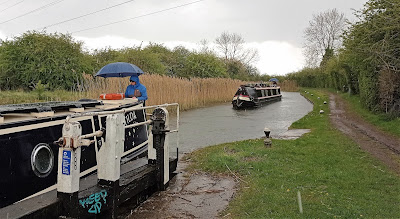 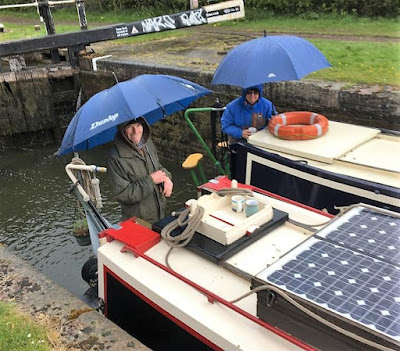 ...and stopped just as we pulled in. The towpath had recently been resurfaced so there was a strip of raw earth between the edge of the path and the armco which will be perfect in a couple of years when the grass has re-established itself, but made mooring up without getting muddy a little tricky. However it was lovely and quiet and had a lovely view over Glen Hills nature reserve. 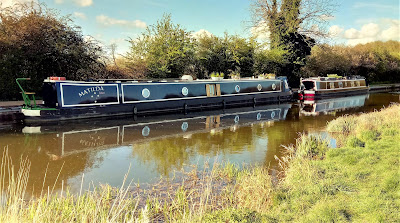 In the afternoon we had a walk up the river to Aylestone Meadows, passing King's Lock, where the river joins the canal for the first time...

...then back down the Great Central Way, a well used and well maintained cycle and walking route on the bed of the disused Great Central Railway line running south from the city centre. 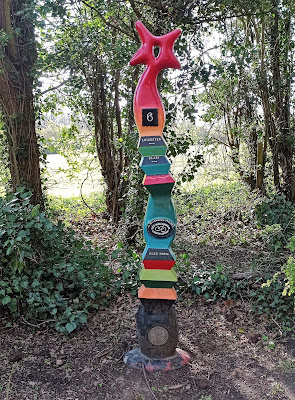 Click here for a very rail-centric description. It forms part of National Cycle Route 6, the London to Keswick route that Dave’s got this barmy idea about doing on a couple of Ebikes in our dottage.

In the morning we got the life jackets out and attached the anchor to it’s chain and rope and secured it to the front T, making Legend ready for the river. We know full well that the River Soar, although a pussycat for 90% of the time, can bite back quite quickly after heavy rain which - at this time of year -  is quite possible. We set off again heading for the city moorings at either Castle Gardens or Friar’s mill. After we passed Aylestone Meadows and went through the lock, it felt as if Leicester had suddenly popped up in front of us.

Just before, we’d been in rural countryside, and now, spread before us were tall buildings and unban majesty. At Freemans Meadow lock, overshadowed by it’s huge weir and Leicester City football ground, it really feels like you’ve arrived... 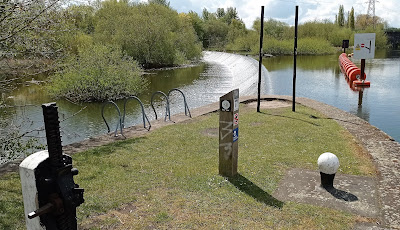 and boating down the Mile Straight  reminded us of the approaches into York and Bristol. 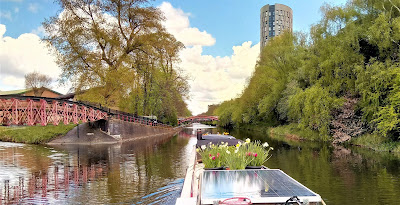 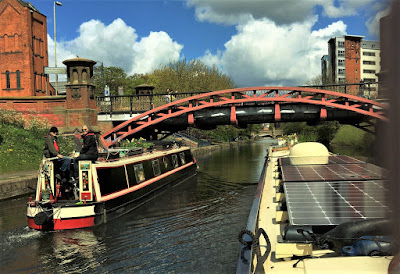 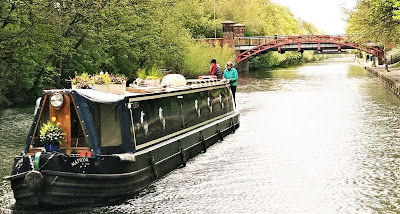 At the end of this beautiful and no doubt once bustling thoroughfare we came to the floating pontoon at Castle Gardens. We’d heard that there was work being done there, so we weren’t surprised to find a CRT work barge tied up, but we reckoned there’d be room to get both boats in front of it. And there was. Just.

The workmen were very accommodating, they were rebuilding the steps under the gate, but kindly put a plank over the new brickwork so we could get out to the gardens, and were happy to have Matilda’s stern rope tied to their barge. They got a brew and some of Mandy’s date slice for their co-operation.

With the boats tucked in behind the wall the pontoon made a good sun trap so - despite the chilly wind - when the sun came out it was glorious and we sat out on deck chairs for lunch. 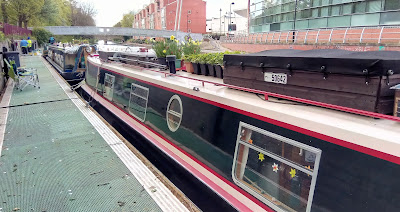 Later on we wandered through the gardens... 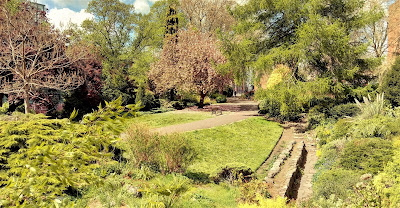 ...and climbed up the Motte before following the King Richard III History Trail round some historic bits of the city, which are surprisingly numerous when you start looking behind the shiny modern façades. 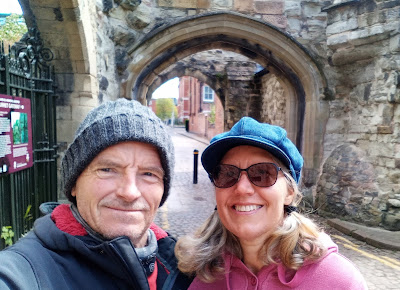 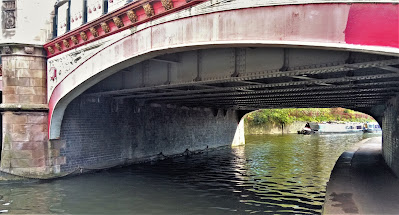 With its Roman roots and wealthy medieval background there is much to see, and King Richard III’s final resting place famed - in 2012 when it was excavated - for being a dingy car-park, is now a beautiful, peaceful, urban oasis. We were unexpectedly impressed with Leicester; it has a dodgy reputation amongst boaters - just about everyone we’ve seen over the last few weeks was either going straight through or only stopping for one night - and although experience has taught us to take tales of doom with a generous pinch of salt, we were still slightly apprehensive about coming here. However, we can report, Dear Reader, that this historic city is well worth a visit and we felt perfectly happy here.
at May 09, 2021