Among the many publications and maps depicting the navigable route from Norton Junction to the River Trent, there appears to be some confusion about the naming of parts. Google maps seems to scatter the names “Grand Union Canal” and “River Soar” willy nilly on any bit of blue, while the OS at least has a plan, labelling the man-made bits between weirs as the canal and everything else as the river.

We’re going with Canal Plan AC, a very well researched on-line database that we’ve found to be 100% trustworthy when it comes to watery facts. That has three very long names for various bits of the route. It looks confusing but each name gives a clue to the history of the individual waterways that now make up the navigation.

The River Soar was made navigable to Loughborough from the Trent in 1778 and then through to Leicester shortly afterwards. For a while the Loughborough Navigation Company owned the most profitable waterway in Britain and in 1793 the Leicestershire and Northamptonshire Canal was authorised, to link the navigation to the River Nene and the proposed line of the Grand Junction Canal at Northampton, but by 1801 the money had run out twice and it had only got as far as Market Harborough. After several changes in plans (and chief engineers) a link with the rest of the system was made in 1814 by building a narrow gauge canal from Foxton to Long Buckby where it joined the Old Grand Union. As the railways at first chipped away, before eventually completely wiping out profits, the downward spiral of underfunding and reduced tolls saw both the LNC and the L&NCC bought out by the new Grand Union Canal Company by 1932.

So the navigation from  the River Trent to the GU Main Line, these days simply called the GU Leicester Line, comprises of no less than three separate waterways, each with its own distinct history. These are:

Interestingly, the majority of the waterway is wide gauge with 14’ x 72’ locks, and the original proposal for the L&NC was for a wide canal all the way to Northampton. This would have made a crucial wide beam link between the northern and southern waterways. The Norton to Foxton link came very close to joining the two halves of the country with wide bridges and two wide tunnels at Crick and Husband’s Bosworth, but that was only so two narrowboats could pass each other. The lock flights at Foxton and Watford were both, (in a money saving exercise that has become the bane of many wide beam owners lives) built to the 7’x72’ narrow gauge. In 1910, in what must be the most short sighted decision in canal history, the Foxton Inclined Plane - a very effective wide beam boat lift built just ten years earlier to bypass the bottleneck at the locks - was mothballed and then sold for scrap due to lack of traffic. The designer, Gordon Thomas, must have been tearing his hair out; the lack of traffic was nothing to do with the lift itself, indeed it was a success, saving hours of time and thousands of gallons of water, but simply because the matching inclined plane, scheduled for construction at Watford, was never built.

Now we’ve cleared that up, on with the story.

Although Castle Garden moorings were 48hrs, we only stayed for one night before moving a quarter of a mile downstream to Friar’s Mill on the Friday because there was rain forecast for Saturday and we wanted to stay in the city till Sunday, also there was space there and a water point.

When we tied up we discovered that the taps weren’t working, so Dave phoned up to report it. The very nice Cheryl at CRT East Midlands told him that there was a bit of a conflict at Friar’s Mill because they didn’t own the site, but that she’d message the maintenance team and hopefully it would be sorted by Monday…. Or Tuesday…. If nothing else broke.

On Saturday it threw it down; water, water everywhere but not a cliché in the taps. As we’ve said previously, the Soar is a very excitable river, so it was no surprise that in the afternoon CRT issued a flood warning notice for the whole river. That was fine by us, it meant we got an extra couple of days in the city.

Predictably, on Monday the flood warning was cancelled. However it was blowin’ a hoolie and raining, and the taps hadn’t been fixed yet, so we stayed put. In the afternoon we picked up a box of free Covid tests from Tesco, then went to explore a bit more of the city. We discovered the Juan Centre, Leicester Prison, Victoria Park and New Walk. 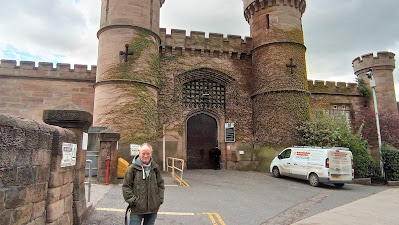 Leicester Prison entrance. Not what we were expecting! 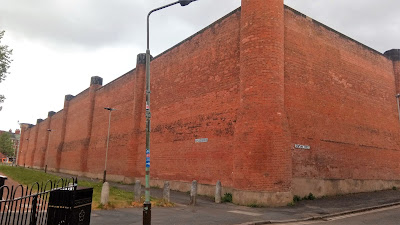 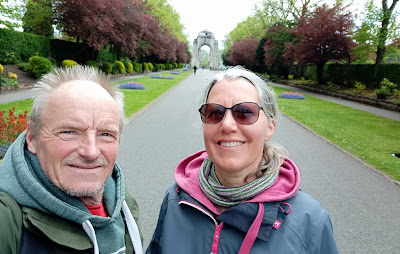 New Walk. almost a mile of traffic free walking from the park to the heart of the city
Later on Dave and Bob did a car shuffle to Birstall, bringing ours back so that we could get off to Mychett first thing in the morning. Ann-Marie had a doctor’s appointment and we wanted to combine it with seeing Mum &Dad and Karen & Andrew for the first time in months, hence the Covid test kit. Armed with two negative results we set off early doors and had all the official business sorted when Karen finished work at lunch time. In the afternoon we had a walk along memory lane down the Basingstoke canal to the visitor centre (where we lived for three months,) for a disappointing coffee. That’s not a slur on the visitor centre; the café staff were no doubt just as disappointed as we were that they could only provide instant decaf, had to serve it in a paper cup, and that we then had to leave their lovely cosy establishment and go and drink it outside in the cold. When we’re allowed to, the first thing we’re going to do, while everyone else is busy hugging each other, is sit in a warm tea room and drink hot tea out of a china cup. In the evening we went over to Mum and Dad’s for a fabulous bar-b-cue dinner. (Why is it compulsory for bar-b-cues to be three dinners in one?) it was really great to see them face to face, zoom calls have been an undeniable godsend, but not a patch on real conversation.

Back at the boats the taps had been fixed (thank you Cheryl and CRT) so in the morning we had another early start, water tank filled, washing in the machine, bikes in the car, drive up to Birstall then cycle back with our new comfy saddles that we’d picked up from Karen’s. 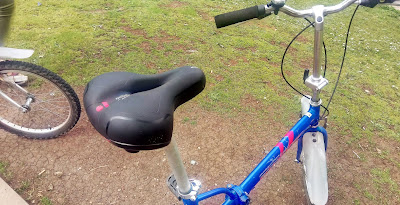 Another 2 wash-loads and a water top up when we got back then, with Matilda Blue behind us, we set off past the big weir and into North Lock at the beginning of the canalised section that passes Abbey park. 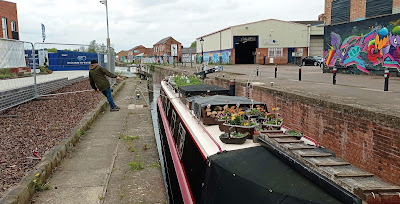 After Limekiln Lock Bob ran aground under a bridge. 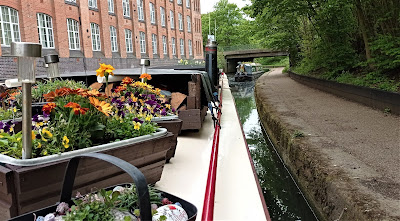 It was very shallow and horribly black and smelly, with evil looking bubbles coming up under Matilda Blue as Bob tried in vain to get free. We were still afloat so we took the front rope, tied it to our stern dolly with about 20’ of slack and went full throttle. The line went taught and we jerked her free - but by then the prop was fouled. Sitting in the middle of the river, Bob had to take two trips down the weed hatch, delving into the black, smelly water, before he managed finally clear it. 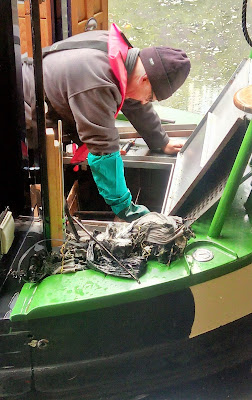 As well as the usual pallet strapping, plastic bags and bits of wire, he also pulled out a sari, complete with all the frilly edge bits!

...the as yet unfinished Memory Lane moorings...

Memory Lane Moorings. You could tie up ,but as yet there's no access to the land.

...and the site of the old Wolsey textile mill, now a very pleasant housing development. 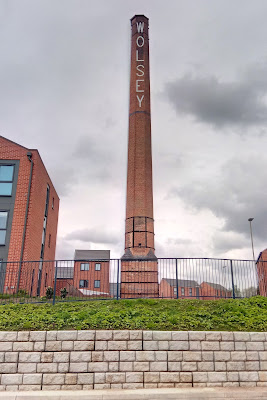 Swan’s Nest lock and the National Space Centre mark the end of Leicester’s canalised section, and we were back on the river proper where it was a lot cleaner, deeper and twistier.

We moored up at Birstall just as it started to rain. We’ll be here for a week or so; there’s lots to see and miles of footpaths through the old gravel workings that have been turned into beautiful water parks, wildlife havens and nature reserves, forming an amazing half-mile-wide green corridor that runs north from Leicester centre. 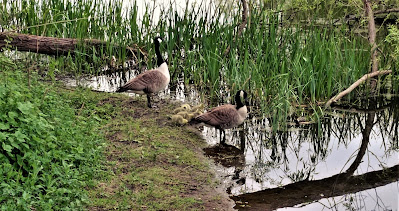 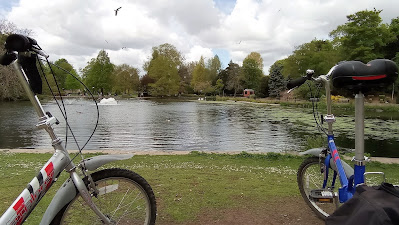 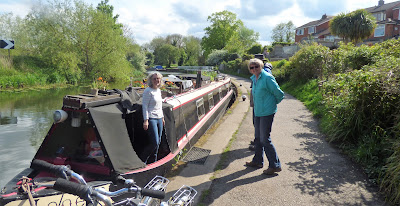