...no, I thought you packed the parachutes.

We've just exchanged contracts. That really was the point of no return.

We might not be quite listless but we're going to be totaly homeless in a week.
at June 23, 2010 No comments:

We’re moving into the van next weekend. That gives us the beginning of next week to either store, give away or bin everything that we don’t have room for, and clean through the house.


On Saturday we took our little Acadiane down to our friend’s house near Winchester. It went on an “A” frame behind the Kon-Tiki and was very well behaved indeed. 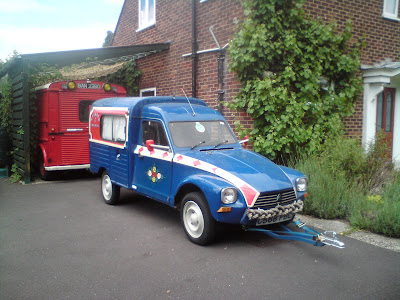 On Saturday night we were at our friend Elaine’s 50th birthday party down near Portsmouth. It was fancy dress; the theme was “The Wizard or Oz” We assumed that there would be loads of scarecrows, lions, witches and tin men, so we went as the yellow brick road. 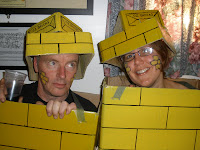 About 10 other people had the same idea; it ended up looking like a yellow brick interstate highway! Damn good party though. 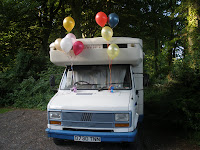 We stayed the night in the car park then on Sunday met up with Ann-Marie’s parents, Carole and Peter and her Sister, Karen and Karen’s boyfriend, Andrew at the Liphook classic car show. Lots of shiny metal and interested huddles of people round open bonnets. 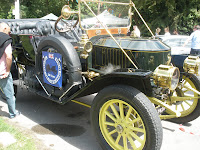 Star of the show was a Stanley Steamer in full working order driving round the site. We had a lovely picnic in the sunshine then hurtled back to Lincolnshire just in time to order our meals at our last-but-one 2CV club meeting at the pub. There must be an alternative to all this manic tearing around the country at weekends. If only there was a way we could slow down a bit. Oh, there is!

Happy Birthday Elaine, and thank you both for a fab party!
at June 21, 2010 No comments:

Everything going ahead, it looks like we'll be out of here on the 30th of June. That's two weeks away. Eek! We'll have two weeks still working and living at a local campsite, then six weeks of folk festivals and family birthdays and weddings. Then, at the begining of September, we've booked a one way ticket  to Calais.
at June 16, 2010 1 comment:

There's a hot brownie in my picnic hamper

So now we're back to waiting. The survey results should be back sometime this week so we’ve got everything crossed; we really don’t want to go back to square one again.

All the garage shelves are empty and it echoes. We’ve never seen it empty before; it was full of junk and firewood when we moved in which we gradually got rid of and replaced with our own stuff. Even when we concreted the floor we did it in two goes and moved all the stuff from one end to the other. We did clear a big space for our Millennium party by putting everything on shelves around the edge and draping curtains over it, but now it looks huge. Blue is in there at the moment having his re-sprayed doors put back on and he looks lost. He’s up for sale soon, the Plums & Custard Dolly is shortly off to retirement in the south of France and the Acadiane is going down to Winchester the weekend after next. It’s all coming together.

Last weekend we took a picnic to Grimsthorpe Castle along with about 3500 Brownies, Guides and Rainbows. “Learn to Morris dance with Bourne Borderers” was one of the activities at the 2010 South Lincolnshire Girlguiding Party in the Park. We had about 30 at a time; we gave them all big sticks and got them to bash them together. All co-ordinated and in time to the music - obviously.
We seemed to get on a lot better in the afternoon after we took off the black face paint and didn’t look so scary. It was a brilliant day despite being the hottest of the year. There’s something very sweet about holding a hot little hand while its owner concentrates on skipping.

On Sunday we had the day with Frankie and Harry; they stayed over after coming up here for a wedding on Saturday (Congratulations Liz & Dunk!).

Sunday morning was lovely; we all just sat and chatted, something we just never seem to have the time for anymore. Then in the afternoon we went over to Sawtry where Pigdyke were dancing in the annual feast parade under the annual thunderstorm.

Our next blog should have some confirmation one way or another. 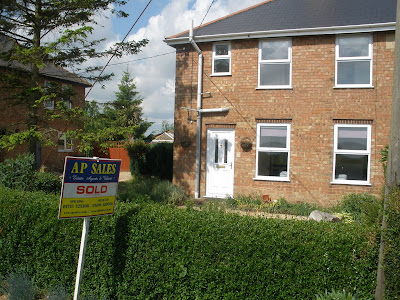 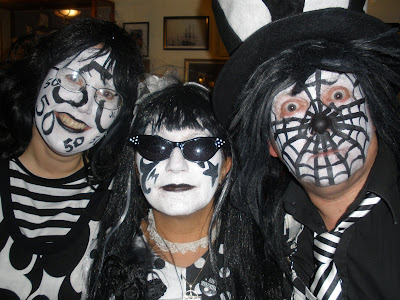 There’s not a lot of stuff left on the “Things To Do Before We Move” list, but we’ve stared a “Things To Do While We’re Travelling” list instead. It seems we can’t be completely listless – at least not yet.
at June 01, 2010 No comments:

There really isn’t a lot of River Thames between the K&A and the Oxford canals; Oxford to Reading is easily achieved in about half an ho...