Getting to the Marathon to see Chloe run did not go to plan. First, the train we were going to catch from Karen’s left the station just as we got there so we were an hour later than we wanted to be. Then, because of the mass of people around Canary Wharf, we couldn’t get to the 18 mile mark where we’d agreed to be standing and waving, along with most of Chloe’s other relatives, and ended up at about 18½. However, rather than fate plotting against us, it seemed that our dear friend Karma was at work, once again nudging good fortune into our path. Chloe had a transponder so we could track her progress every 5km and we knew when she ought to be near. After 20 minutes of leaning over the barrier desperately scanning the endless stream of runners coming towards us we were all mesmerised and about ready to give up and accept the fact that we’d missed her.

Then Dave suddenly yelled out “Chloe!!” And there she was right in front of us! 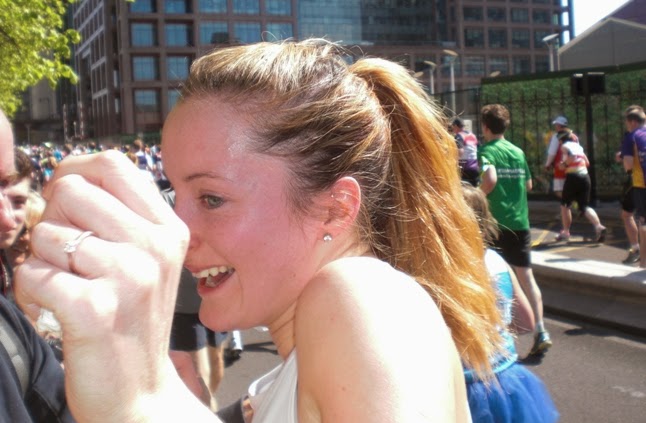 There were hugs and tears all round and then she was off again to whoops and whistles and shouts of “Go Chloe!”  It was one of those snapshots of life that you know you’re going to replay again and again, and each time you do it will bring a smile to your lips and a lump to your heart - and we could so easily have missed it. If we’d been an hour earlier we’d have been at Mile 18 along with a huge crush of other people and we’d have not seen anything. Nobody else managed to get there either so it was a huge boost for her to see us. We are very proud to report that our daughter finished in a very respectable 4:42 and was the fastest female running for the British Forces Foundation.

Back on the boat spring has been bursting out all over. 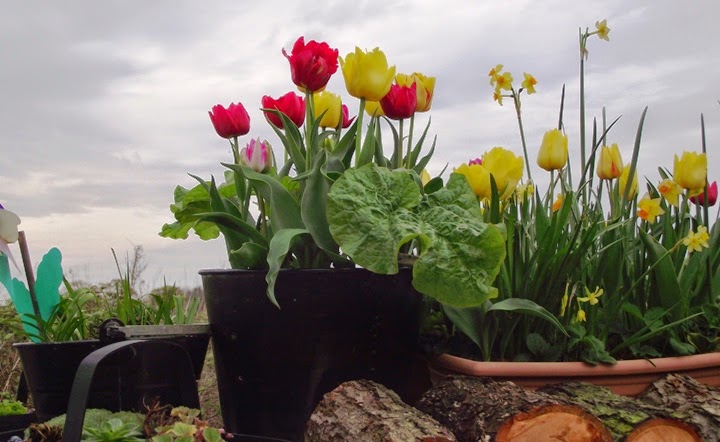 We’re very proud of our floral display this year; the idea is to colour code the flowers each year to make it easier to date the photos. This year, once the tulips have gone, it’s going to be mostly yellow and orange. Marigolds, Nasturtiums, Pansies and Orange Daisies will be providing the colour, along with beans, tomatoes, courgettes and, of course, rhubarb.
Approaching Chester by boat is rather lovely; there are 5 wide locks which bring you to the moorings at the east of the town,

followed by an amazing cutting through solid rock with the city walls high above you. 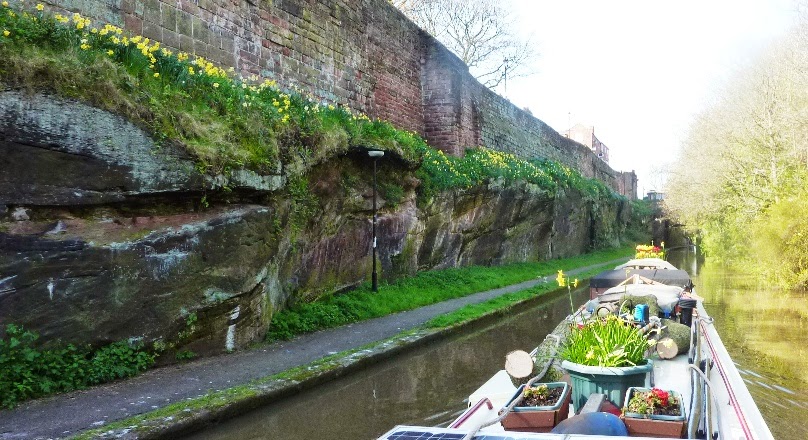 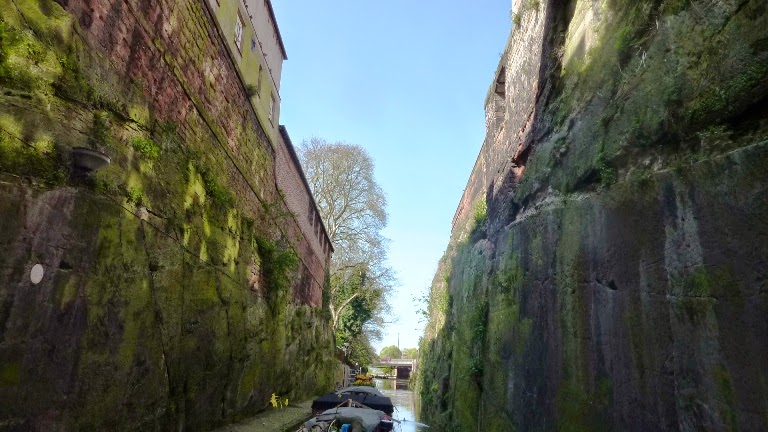 After that comes a three lock staircase where we confused all the gongozlers by passing another boat halfway down. Don’t try this at home. 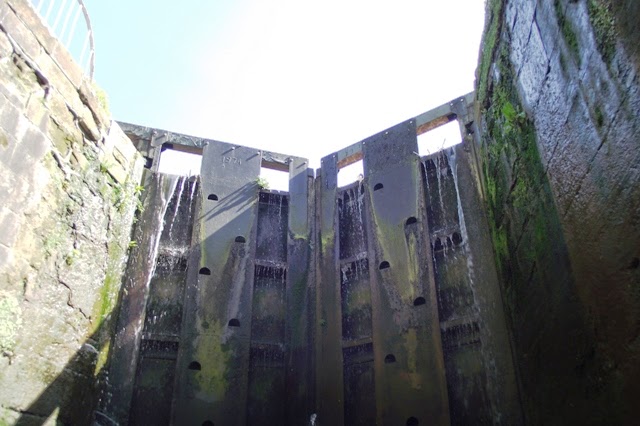 We moored up at the bottom of the staircase opposite Telford’s Warehouse in a wide basin. 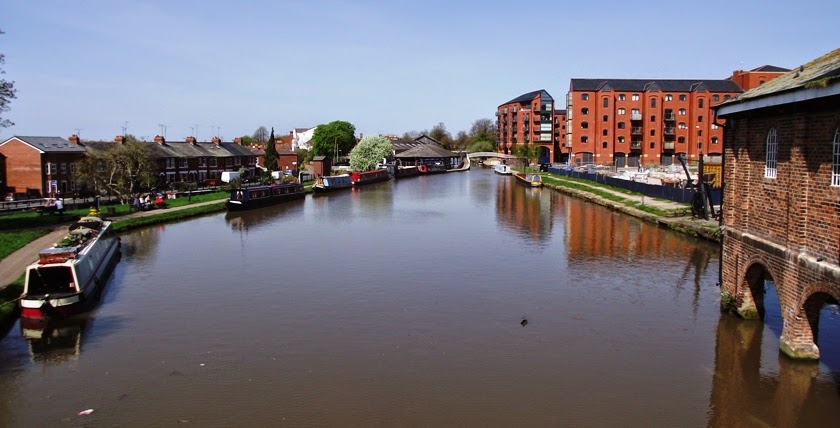 As part of our preparation for the Boat Gathering at Ellesmere Port we wanted to give our tumblehomes their annual coat of paint which meant turning round several times to keep the side we were working on in the shade. Through trial and error – mostly error - we’ve discovered that turning round with one end or the other still attached to the bank is easier, more controllable and, as there are always spectators around when you find yourselves doing these things, neater than any alternative. Of these, it seems the most common is to launch oneself into the middle of the cut with no obvious plan and even less hope of success, then spend half an hour using ever increasing amounts of throttle to no effect whatsoever, whilst putting oneself and all the other craft that miraculously appear from nowhere at the mercy of the inevitable squall that is guaranteed to whip up the minute one casts off.

Chester is fabulous. We really don’t know how we’ve managed to get this far without visiting it before. It’s got a huge cathedral, a racecourse, a riverfront, two-story medieval shopping streets and the city walls go all the way round it. 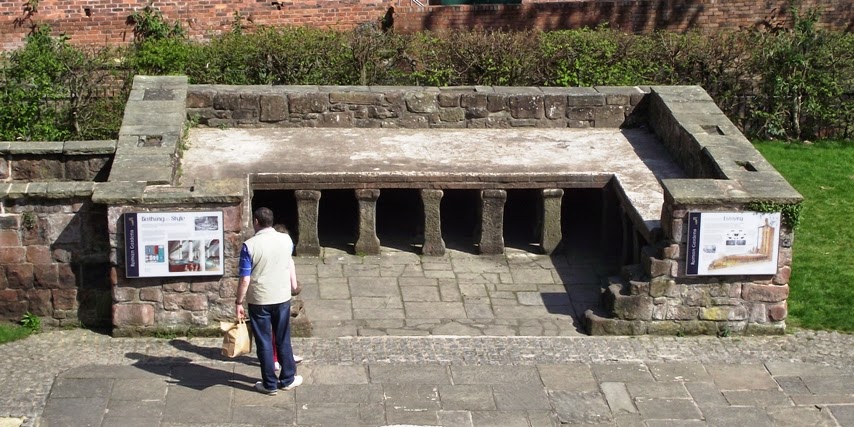 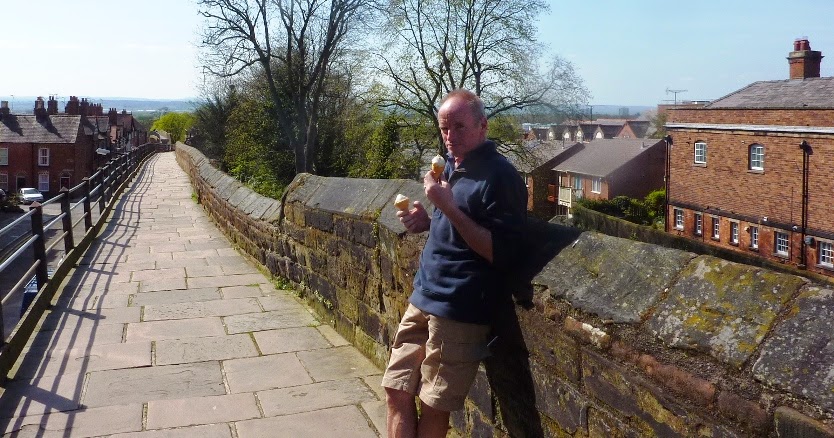 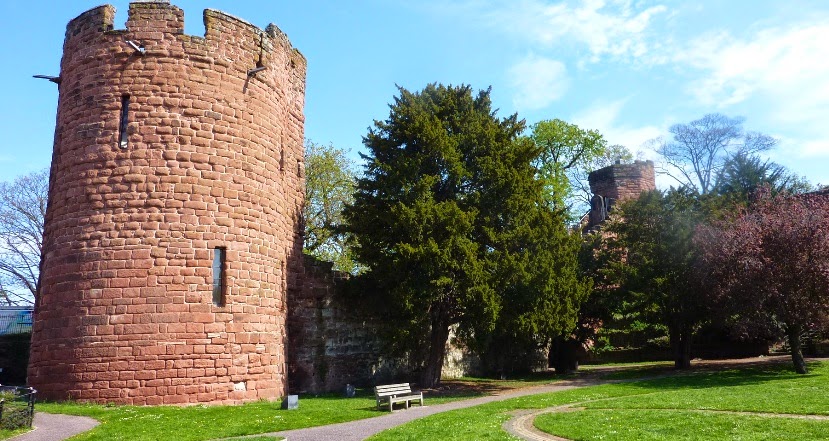 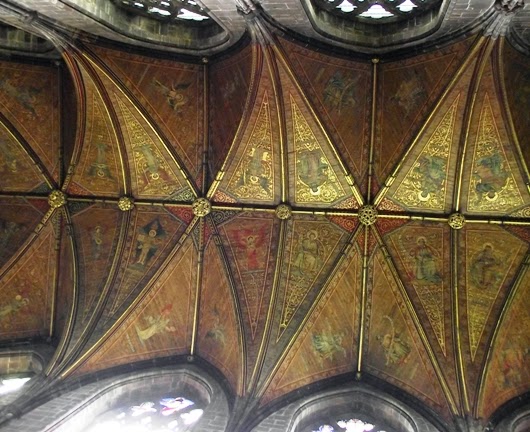 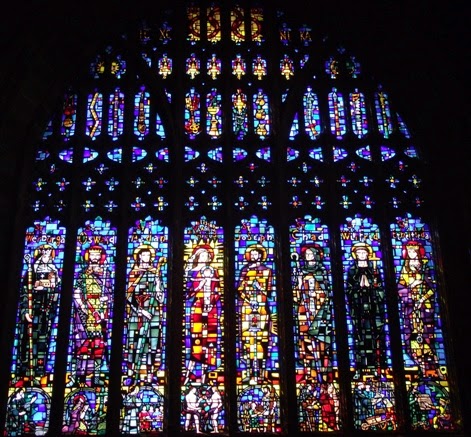 The Shroppie from Chester to Ellesmere Port starts off pretty enough but gets grimmer closer to the end. Industry closes in as does dereliction and urban decay and the last bit, just before you go under the motorway tunnel is particularly dire. Ironicaly, that makes the entrance into the Boat Museum all the more welcoming. Going under the last bridge takes you back 200 years. 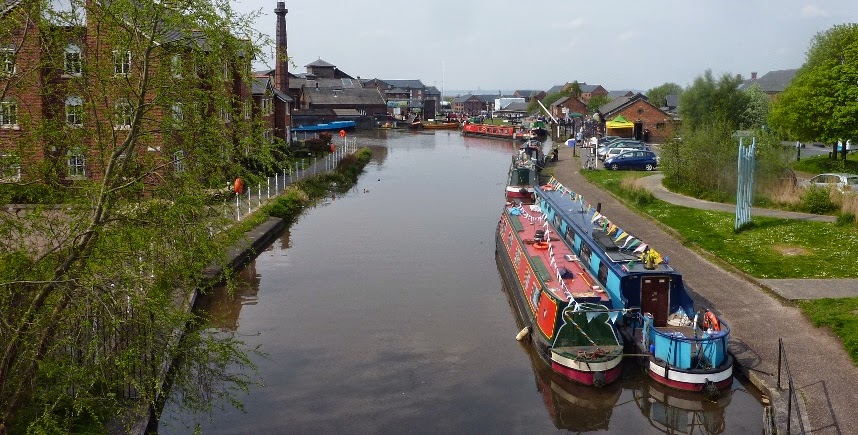 We arrived on the Wednesday night and moored up alongside Lost in the Mist on the water point. Later that night Sesh turned up and moored alongside us, so in the morning there were three of us  waiting to go down the two narrow locks into the bottom basin. Of course by then the wind had picked up so we had fun and games getting all three of us backed into our allocated moorings.

David and Kate came to join us for the weekend 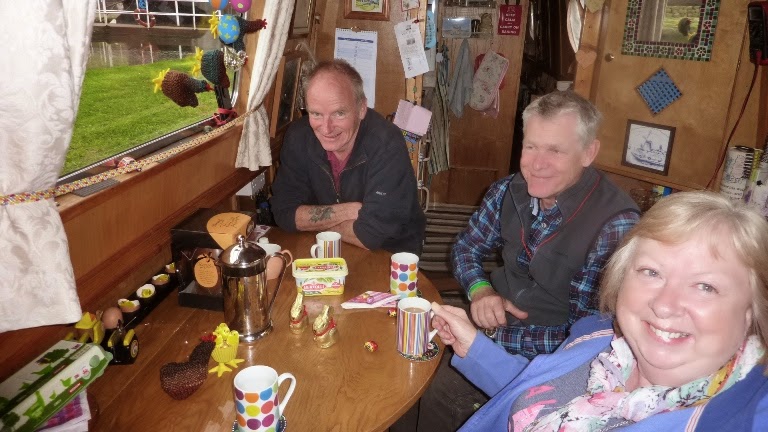 and over the next couple of days lots more boats arrived, both historic working boats, which were put on display in the top basin, 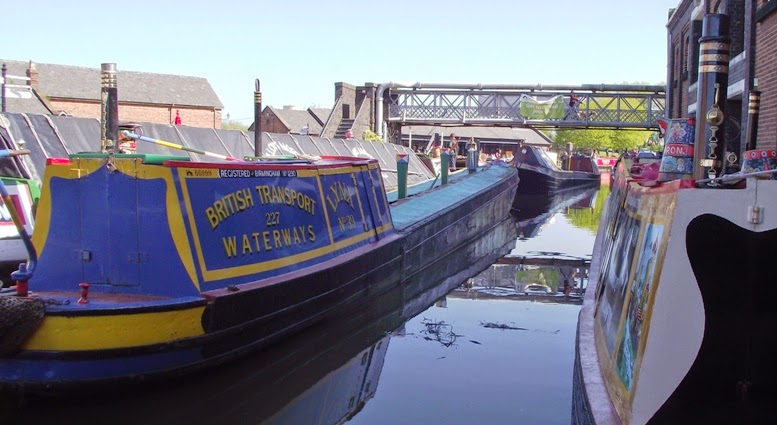 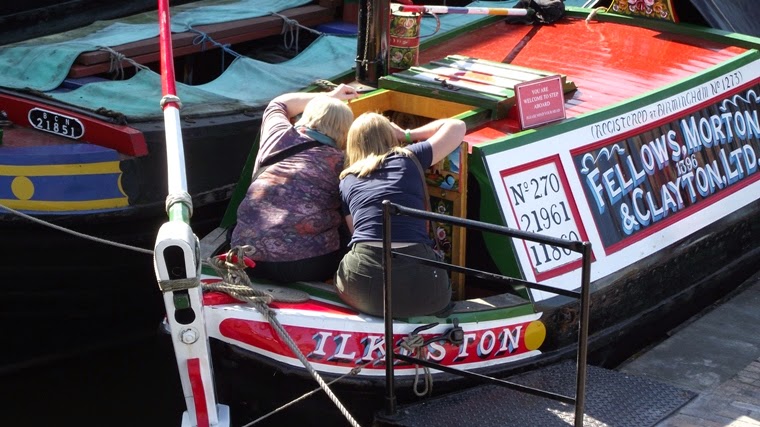 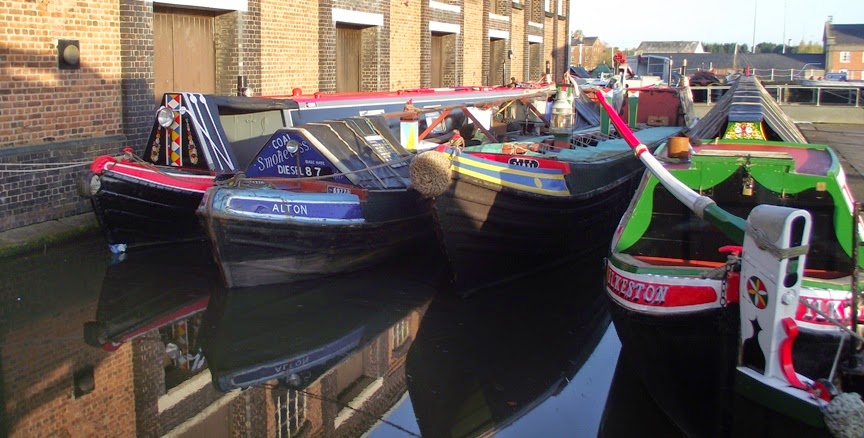 and pleasure boats like ours which were all together in the bottom. We introduced Jenny and Graham on Lost in the Mist to the silliness of bunting and lent them some. Our own bunting was enhanced by the addition of some new fairy lights and an even higher Heath Robinson style retracting-and-leaning-over post so we can leave the bunting up when we go boating and not hit bridges with it.

Jono and Nicole arrived on Sunday just as D&K were leaving; they stayed for lunch and helped to demolish the Easter cake mountain that had built up. 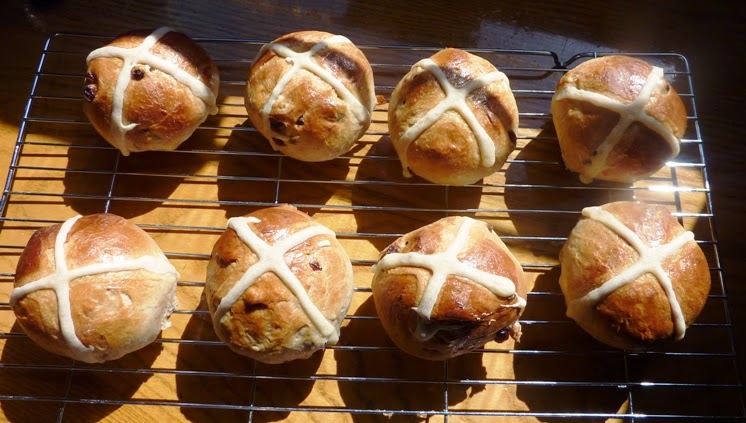 We had a smashing time; both the exhibits and the buildings of the museum are fascinating. The phenomenal amount of dedication and effort that the staff and volunteers have, and continue to put in, is staggering and the wealth of knowledge and experience that is wrapped up in the place is plain to see. Of course there is an awful lot still to do; there are a lot of boats waiting to become the next project, and yet more that are sunk to preserve them and will probably have to wait a very long time. 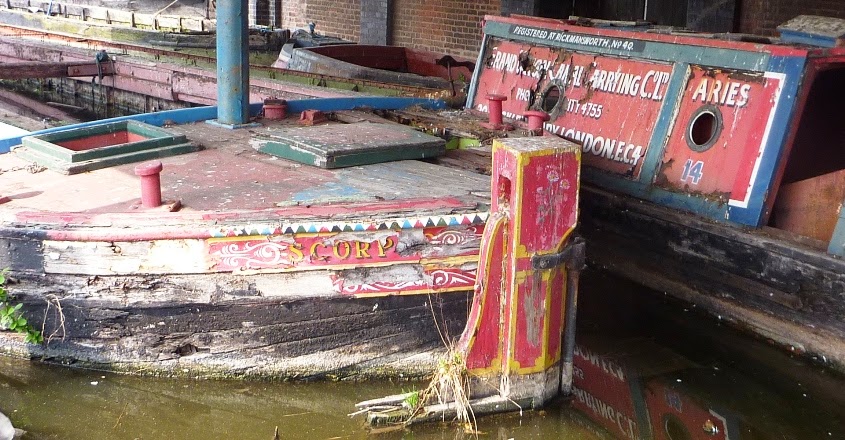 Hopefully, when time and money are forthcoming they will still be viable.We really enjoyed our stay and were made to feel very welcome; coming back again is a distinct possibility. Maybe next time it’ll be for longer and involve some volunteering on our part.

We’re now back in Chester and will probably get back down the Shroppie, across the Middlewich Branch and back down the T&M fairly quickly. The next big adventure is the Harecastle tunnel and Stoke-on-Trent, then we’re up the Calden which we’ve heard is lovely, so we’re looking forward to that.
at April 25, 2014