It’s all nodding daffodils, gambolling lambs and bloody stupid suicidal ducklings here on the cut, but more of that later.

France was good; lovely and sunny. Good things are happening in Chatanet. Frankie and Harry’s new dog, Iggy, is gorgeous and settling in to his home. 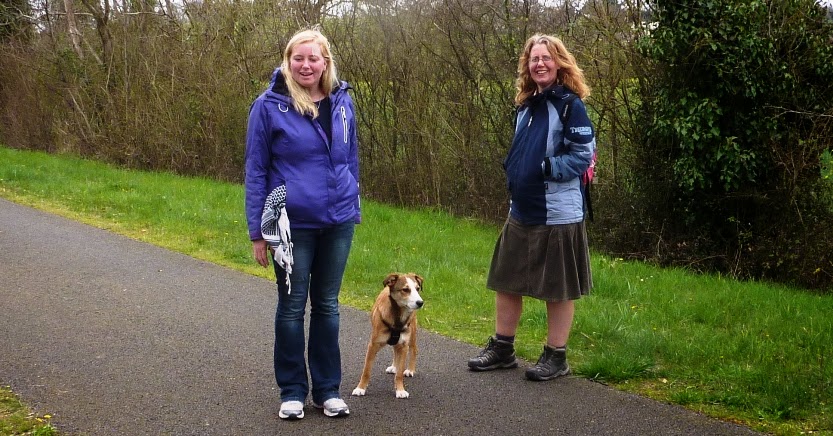 Paul and Harry have concreted the floors and put doors on the barns to create an enviable workshop and spray booth where, as 2CVtech,   they are building virtually new Citroen 2CVs. 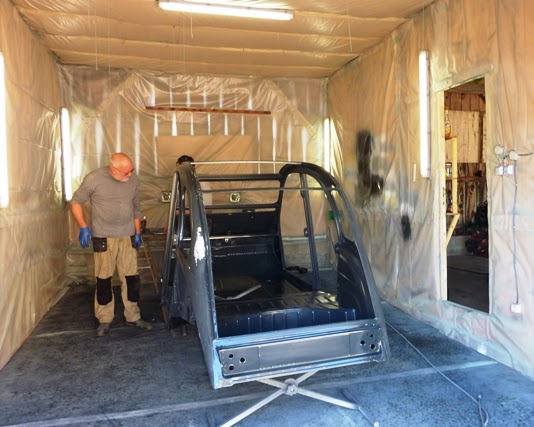 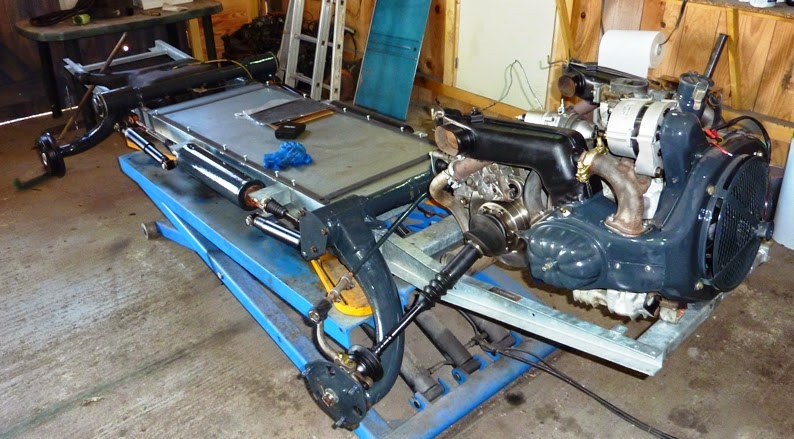 Dave was rather impressed and couldn’t resist getting stuck in with rubbing down and spannering.

We got invited to an evening at one of their neighbour’s houses, which is a weekly thing where both French and English get together and everybody brings some food and something to drink and tries to improve their language skills. Ann-Marie made a plate of cheesy scones. (The word “Scone” doesn’t sound all that glamorous when you’re offering one to a French person.) She then found herself telling everyone our life story, using mostly body language.  Later, after a few cognacs, Dave made a brave effort at a joke about two tortoises that nobody got, but everyone enjoyed the way he told it.
We had a fabulous week and were made to feel very welcome by the Griffiths Brookes household. It is no surprise that their warm hospitality is the main reason visitors to the gites keep coming back. 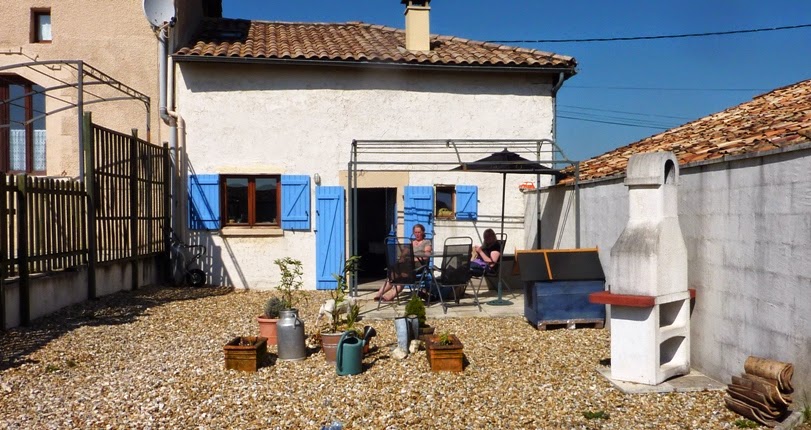 We had some very sad news when we returned to the UK. Since we had been moored near their house at Woodlesford last summer, our friends John and Gill had become regular visitors to the boat and we’ve got to know them well. We knew Gill had an ongoing illness, but it was still a shock to hear that while we out of the country she’d sadly passed away. We went to offer our support to John at a celebration of Gill’s life which was held at their local tearoom and craft centre in Methley. It was a beautiful occasion; there were lots of their friends there from all walks of life, all with some fond memory of how Gill had touched their lives. We’ll remember the way she lit up the room, the wonderful hats, the twinkling eyes and the warm smile. It’s impossible to think that such a vital life-force has gone and we’re going to miss her a lot.

We’ve done a heap of boating since the last post. We went from Hall Green stop lock at the bottom of the Macclesfield

to Harding’s Wood Junction, turned northwest on the Trent and Mersey down Heartbreak Hill to Middlewich,

then west on the Middlewich Branch of the Shropshire Union to Barbridge Junction, where we are now. The narrow locks on Heartbreak Hill were doubled to speed up passage of working boats. these days some of the pairs are still both in good repair and usable,

but some have just the one in operation with the other one either derelict or non existent. 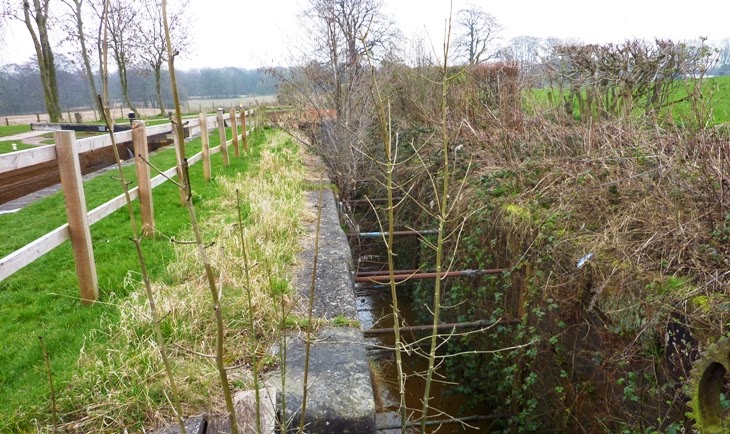 Norm and Jude, Harry’s mum and dad, came to see us at Wheelock, it was the first time they’d seen the boat and we loved having them on board. At Middlewich Pam and Brian, more first timers, joined us for lunch and a very short lesson in locking; we took them down King’s Lock, round Middlewich Junction and up Wardle Lock before mooring up. 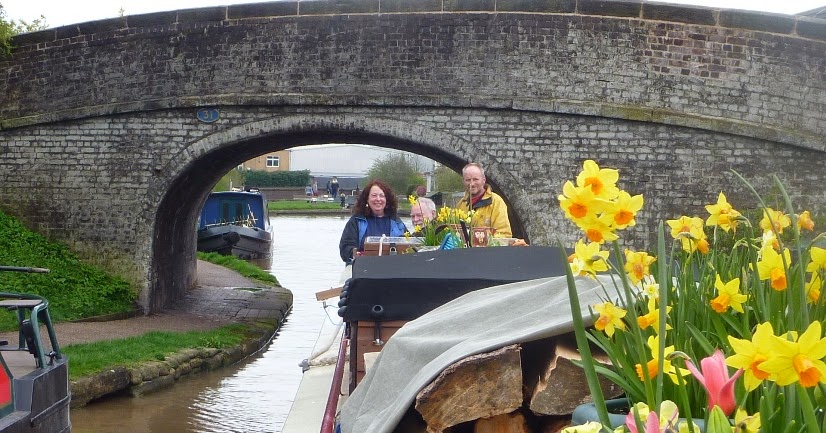 It’s was a trip of less than 100 yards, but it involved five boats coming from all directions and included the entire length of the Wardle Canal passing Auntie Maurine's Lock Cottage so it was full of canal heritage and history. Both couples left with promises to return; Pam’s daughter lives in Chester so we’ll try and organise something there, and Norm and Jude are keen to meet us at the end of the Calden Canal when we get there.

As well as having visitors to our boat we’ve been visiting ourselves. Arthur, who we met last year on the Ouse, has had his boat, Shambles, moored for the winter in a marina at Anderton. We’d been invited to an open meeting at Anderton Visitor Centre with Richard Perry, the new Chief Executive of the CRT, so we thought it would be nice to go and see Arthur and Eve, who we didn’t meet last year, beforehand. There are a number of these meetings being held across the country, the CRT use their database of where boats are permanently moored and where continuous cruisers are at that time to compile a list of customers who are then invited to attend by email. We had lunch on Shambles then walked over to the marquee where, along with Arthur and Eve and about 30 other people, we were supplied with tea and biscuits and invited to ask any questions we liked of Mr Perry.  We were impressed by how well he and his team seemed to listen to everyone and tried to answer everything honestly and not to dodge any of the questions. Although we didn’t have a particular agenda, a lot of the points raised were relevant to us in one way or another so we found the whole experience useful. It was certainly a world apart from BW’s way of doing things. Anyway it was good to finally meet Eve; we’d thought she was Arthur’s imaginary friend, but it turns out she’s very real and very nice and we had a lovely afternoon aboard one of our favourite boats.

Half way down the 28 Cheshire Locks, at Hassell Green, we saw our first ducklings this year.
Ahhh! 11 little round bundles of fluff following their mum as if they were tied on with string. Well that was the scene when we walked past in the morning; when we came back later with the boat she only had 3 left. There were two penned in the lock entrance but no sign of any more. Ann-Marie did her best to re-unite them but we still found one in the lock with the boat as we went down. It gallantly swam all the way the down one side while Dave struggled to keep it from being squished by 17 tons of Hancock and Lane’s finest, then he had to lean over the back and scoop it out just before it started its return trip up the other side. By that time the lock was empty so Ann-Marie had to lie down and reach over the edge so Dave could reach up and hand it over.

We know it’s only nature’s way of sorting out the stupid from the survivors, and if they all grew up we’d be overrun with ducks, but you can’t help getting involved. It was the same at Middlewich where we used the chimney brush to shoo a hungry looking swan away from another bunch of ducklings. We don’t know if swans eat ducklings; we’ve seen ducks eat mice so it’s a fair bet and, to be honest, we’d rather not find out while leaning out of our side hatch admiring the view.
Our heightened rate of progress across the Cheshire Plains towards the Mersey is so that we’ll be at Ellesmere Port by next Wednesday. We’re booked into the basin for the Easter Boat Gathering and Sea Shanty Festival, but before that we’re off down south to take our place at the London Marathon mile 18 marker on the Isle of Dogs to watch Chloe run past. Whoo-ooh! She’s been practicing hard and we’re very proud and quite convinced that she’ll still be running when she gets to us. Paul and Janice are coming over to watch as well although Chloe doesn't know yet. We're all meeting up at Susan and Crispin's in Surbiton afterwards to celebrate. that should be a good do! We’re stopping at Karen’s for the weekend, so we need to get the boat to somewhere where we can leave it for a couple of days. It shouldn’t be a problem, there’s plenty of mooring here on the Shroppie, we just need to find a place we like the look of. With car access. And a phone signal. And a nearby shop. Not that we’re fussy of course.
at April 13, 2014