Although we thought we’d not be long retracing our steps from Chester to Red Bull and Hardings Wood Junction, this has not turned out to be the case. What, us? Not doing what we thought we’d do? Who’d have guessed?

In Chester basin we met a lovely couple called Paul and Lindsay on Nb Happy Daze who we got on really well with.We went up the Chester locks with them and reluctantly said goodbye when we stopped for water at the top. 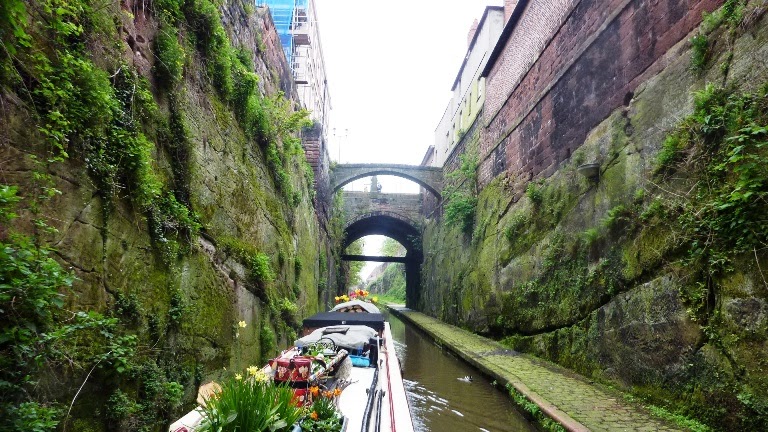 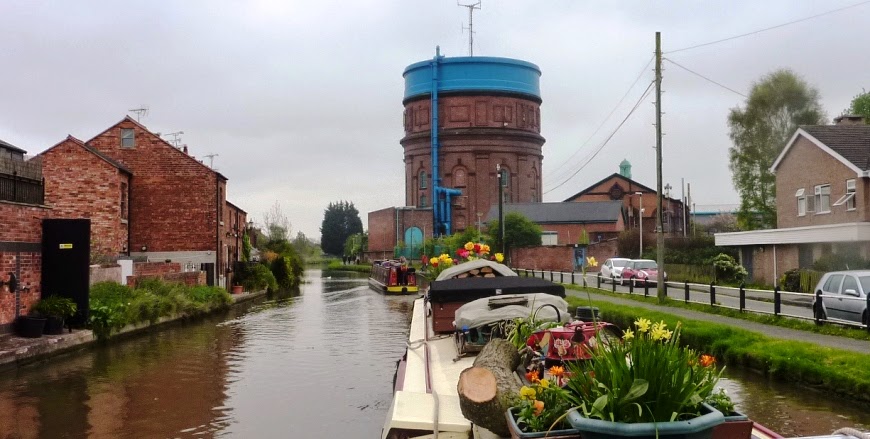 We knew we were being followed up the locks by a historic pair of boats on their way home from Ellesmere Port, but it was only when they passed us on the water point that we realised that the butty was Saturn. 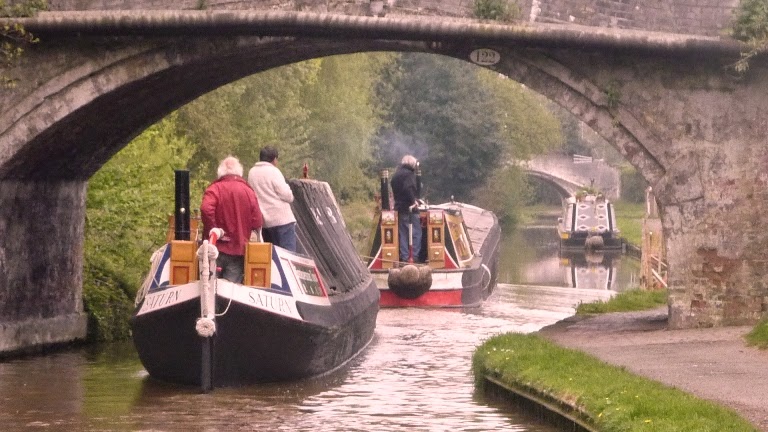 We’re quite fond of Saturn; we saw her being bow-hauled across the Pontcysylte Aqueduct when the Olympic torch was being handed over from Wales to England, so it was lovely to see her go by. We moored up again at Waverton, where we were re-united with our car and, surprisingly, our doormat which was exactly where we’d left it a fortnight before!

Our next stop was Warton’s lock and we were delighted to see that Nb Happy Daze was tied up just ahead. Paul and Lindsay came aboard Legend in the afternoon and the next morning we had another fond farewell as they were going straight on at Barbridge and heading for Llangollen, whereas we were turning left and heading for the T&M. No doubt our paths will cross again. 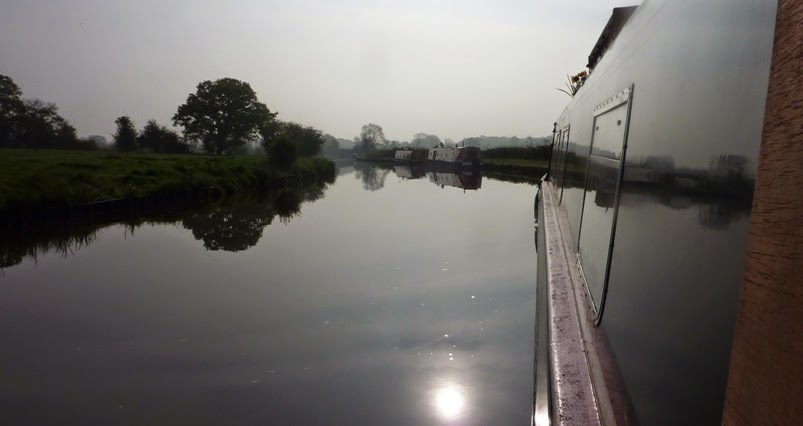 We had a very brave duck come and visit the boat.

She came aboard as bold as brass while Dave was sitting in the well deck, then ate a handful of bird seed while her boyfriends swam around quacking like a bunch of old women.

Beeston Castle towers over Warton’s lock; it’s owned by English Heritage so we didn’t go up there but we walked round it on our way back to the car.

Arthur and Eve from Nb Shambles invited us to a ceilidh at Neston, out towards Birkenhead. It was hosted by the Mersey Morris Men whom Arthur is a member of and who Eve plays fiddle for. We had a brilliant evening and joined in with almost every dance. The Morris Men did a turn in the middle and very good they were too. 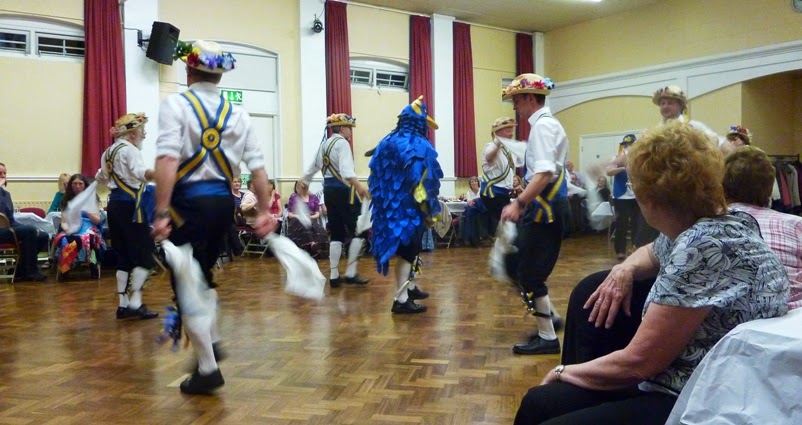 Spring arrived with a bang in Cheshire; suddenly the banks were covered in bluebells, there was lilac out everywhere, and horse chestnut trees were swathed in candles. 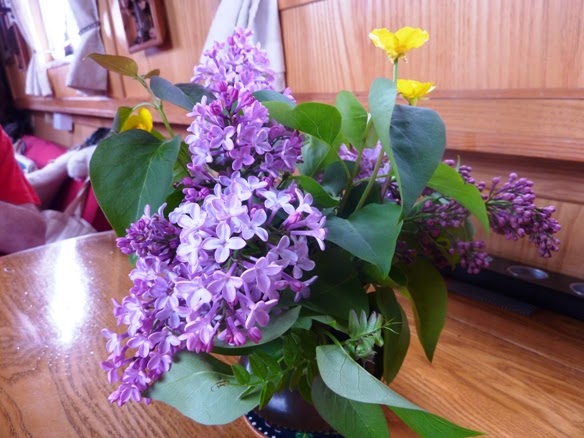 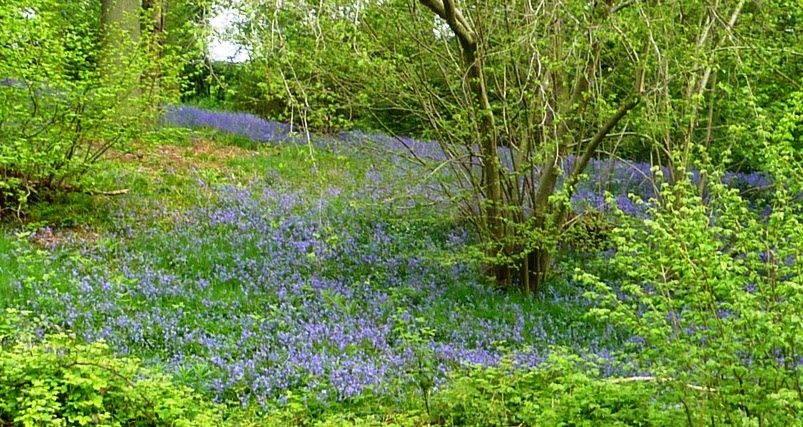 And, just as suddenly, walking in the country involved a trip through a sickly-sweet rape-seed field, or a really hard work-out crossing thigh-high pasture. 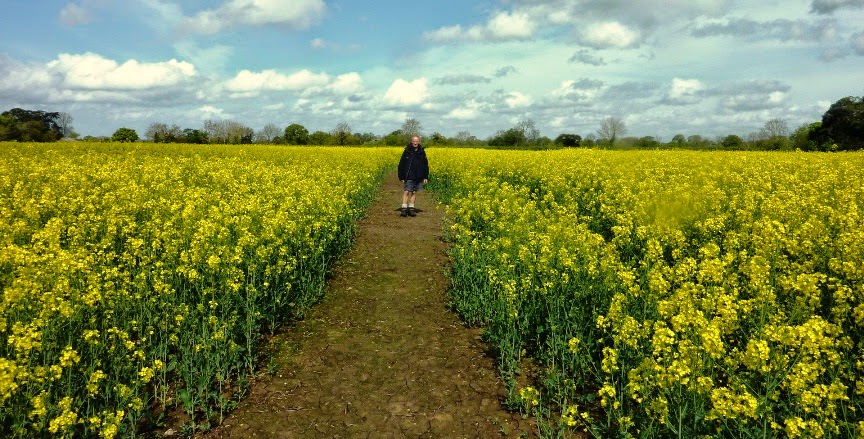 After reading that ”Ash die-back disease” is spreading across the UK, we were a bit concerned about the number of these trees that were still bare silhouettes, apart from the ones still festooned in last year’s dead seeds, but they seem to be catching up now with new fronds and tight black buds on most of their branches. Another thing that happens in spring of course is that all the insects get active. We found this charming little place while we were out walking.

Well it was charming till one of the bees got caught in Ann-Marie's hair and stung her on the head. Dave got the stinger out but the poor little bee was going mad and sending out help messages to all it's brothers. We had to run away before anymore came to the rescue. Then we got nettled and had to squelch our way through a swamp. What a wonderful life we have.

We moored for a couple of nights at Calvely; the first night, just as the sun was setting, we heard the unmistakable sound of a single cylinder Bollinder approaching and looked out to find Spey making her way back to her home mooring.

The next night Anne came for a visit after attending an interview at Southport, so we had a lovely evening with her. What a wonderful life this is.

Dave has applied to enter the 2015 London Marathon. The reason behind this insane decision is that he’s always had a bit of a hankering to do it and was inspired by Chloe’s shining example this year to get off his bum and do something about it before it’s too late. However, the morning after a night jigging about at a ceilidh was not the best time to go out for his first training run - especially as it was the first time in about 20 years that he’s run anywhere. He spent the next three days making involuntary noises to accompany every movement, but now he’s out first thing in the morning twice a week and is up to 11km.

Then May Day was here, so we picked a couple of sprigs and put them on the roof with the tea pot. 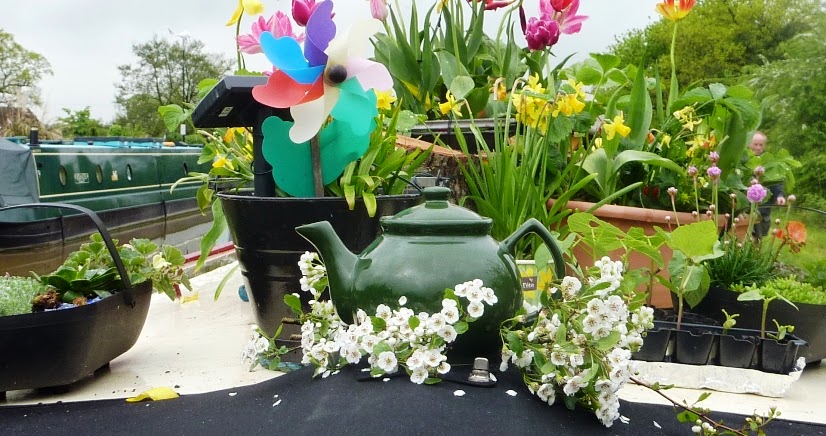 As we said, we’re not really We're getting on with it as quickly as we thought we would. We’re now moored just before Middlewich. We’re going to be here for the full fortnight as we’ve got a few days’ work in Manchester next week; there’s good car access here and we’re happy leaving the boat, so we won’t be moving to Wheelock till next weekend. Also there’s a volunteer working party at Wardle Lock in town on Wednesday when there will be painting, weed clearing and generally tidying up to be done, so hopefully we’ll get involved with that.

John came to see us the other day; it was the first time he’s been to the boat without Gill so it was hard for him, but we had a really nice day and it was great to see him. We all went out for a walk and he’s promised to come again when we’re doing a bit of boating – maybe on our way back up Heartbreak Hill, an extra pair of hands would be most welcome then.
at May 08, 2014